After spending more time with the app, however, and reading Mod’s just-published essay on “Narrative mapping the world,” it became clear that Hi is more like Instagram for writers. (It's relevant that Mod's essay is published on Medium, a like-minded publishing platform.) While it takes a location and a photo as its start point, Hi is really a writing tool. The images and the locations serve as inspiration for what comes next, which could be a 10,000-word essay or a 15-word haiku.

Uniquely, Hi also lets you publish in stages. The default setting is “sketch,” which asks you to take a photo and add a caption of up to 20 words. When the post is published, it is given a timestamp and, on some devices, a description of the weather at the time. (Neither of my two posts – one from a MacBook Air, one from my Nexus 4, have included weather descriptions. Perhaps that funtionality only works on iPhone for now.) In keeping with its “narrative mapping” imperative, the location-sharing part is mandatory. 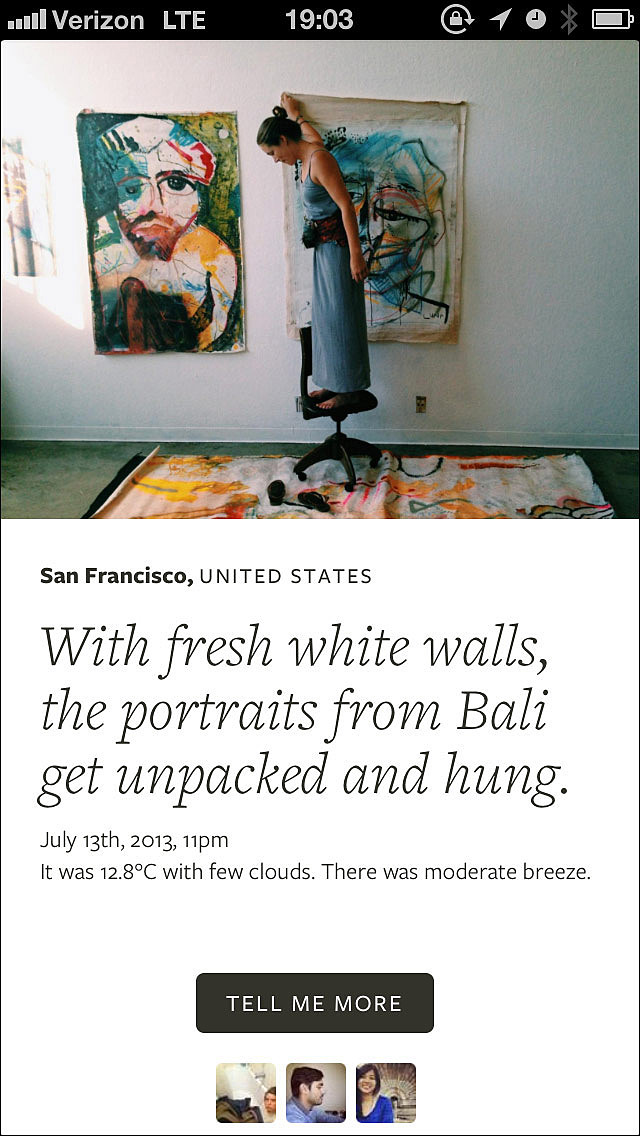 Hi as viewed on an iPhone

At that point, other Hi users might click a button on your sketch that says “Tell me more.” You can then add more text to your post and upgrade it into a “moment,” at which point it is, for want of a better description, “more officially” published and given higher priority in the site’s overall feed, so more people will stumble upon it. The idea behind the tiered publishing model is to reduce the psychological barrier between keeping something to yourself and sharing it with the world. In his essay accompanying Hi’s launch, Mod writes that the Hi team doesn’t believe defaulting to “private” is a good solution, “in part because to make the subsequent shift from private back to public requires overcoming non-trivial psychic frictions.”

The low-barrier, low-friction tiered model also allows for a lot of output, something that Mod hopes Hi will encourage. He believes that constant production is key to creativity. He writes: “Anyone who creates for a living – is creative, has output – knows you need to produce more to get better. There are no shortcuts. The algorithm is painfully simple: Sit in the chair and write, paint, compose. Every. Damn. Day.” The tiered publishing model also acknowledges, and provides a way to overcome, the problem of writer’s block. For many writers, the most difficult problem to solve is knowing where to start. By forcing you to publish a photo and attach to it some basic words, Hi force-prompts your creative synapses. To top it off, the sketches are “memory poles in the ground for you to return to later,” Mod says.

Mod first came up with the idea for Hi six years ago, because he wanted a tool just like it. (I know that because Om Malik posted it to Hi at 8pm on July 15. It was 15.6°C with few clouds. There was moderate breeze.) Place and context has apparently long been important to Mod, a writer and designer who is best known for his thought-leading essays on digital publishing, such as “Platforming Books,” which outlines a way of thinking for book publishing in the iPad era, and “Subcompact Publishing,” a manifesto for micropublishing in the mold of The Magazine. Mod has always made a point of adding a note to each of his essays saying “Where this was written (because it’s good to remember)”. (His piece on subcompact publishing, for instance, was written mostly in Palo Alto, San Francisco, and on the CalTrain, and was fueled by Ethiopian coffee.)

Mod makes the importance of location explicit in his narrative mapping essay by stressing how different people experience place in different ways, and how that informs a collective narrative about the world we live in. “Within you exists a mapping of New York City that’s different from my mapping of New York City,” he writes. “Your NYC street corners, storefronts, and river benches feel – psychically, emotionally – different than my street corners.” 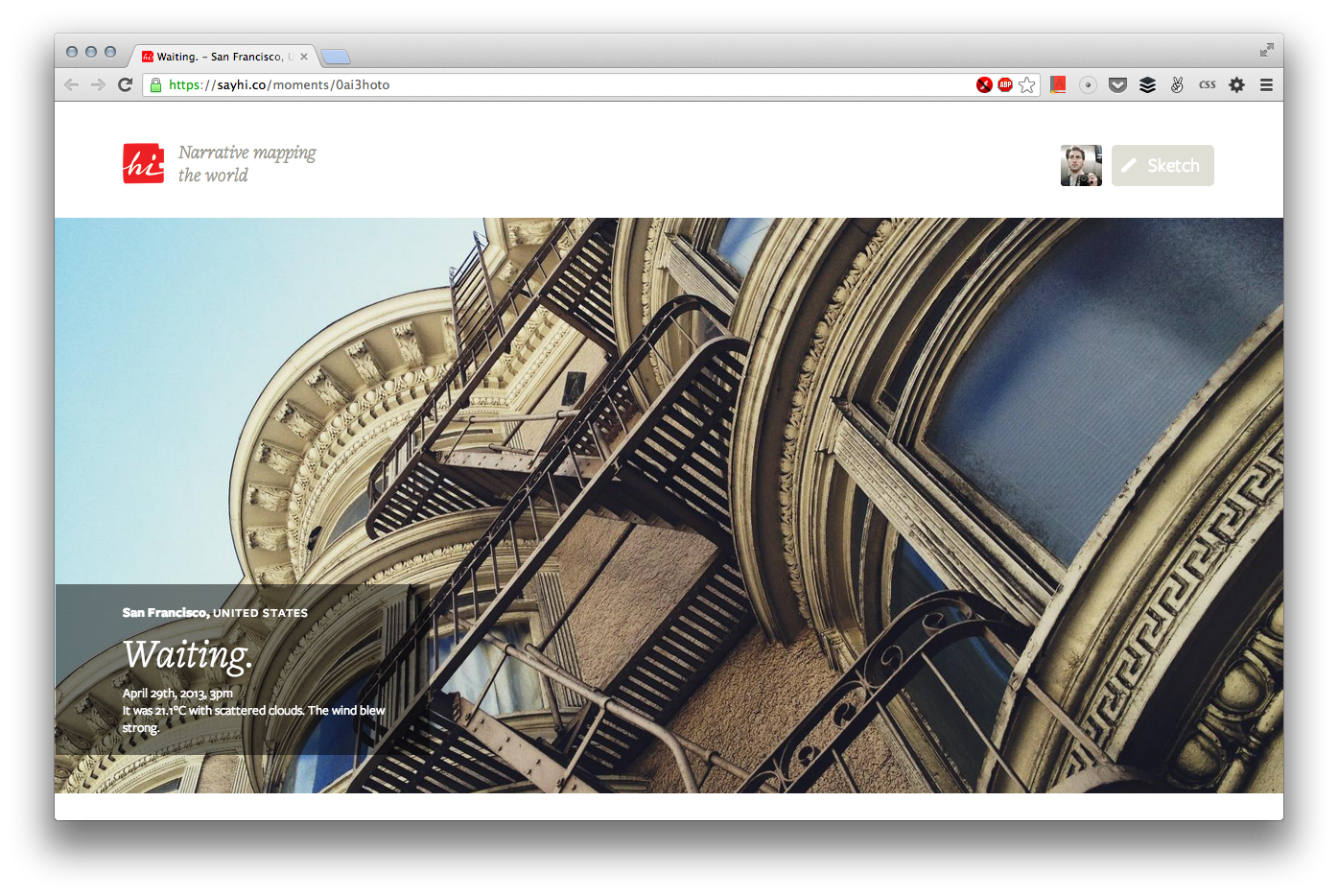 Hi on the desktop

With Hi, Mod and company have also rethought interaction. To keep the user experience clean and free of the ickiness that can sometimes creep in with open-slather comments, Hi lets admirers recognize good work on the platform by allowing them to click a “thanks” button. That acknowledgment is registered and displayed on each post in much the same way as Tumblr lists its reader reactions. Readers are also given an opportunity to send a one-line private note to the authors. This seems to be an effective middle ground between, say, Medium’s “Recommend” button, which affects the ranking of a story on the overall site but isn’t reflected to the writer, and the almost-haptic, ego-feeding (or ego-depleting) responses from public comments.

Mod says his fluctuating team of four to six people has bootstrapped the product over the last eight months and has enough funding to “test product market fit and product interest over several meaningful iterations.” (Mod has also tweeted that Hi was made in collaboration with Tokyo-based Web design shop AQ Works.) For now, it is focused on testing and validating its ideas around narrative maps and the creative process, so monetization isn’t a primary concern. Asked by email whether is a side project or a full-on startup, Mod said it is “As full-on as it needs to be.”

Hi represents another advance in digital publishing tools that put design and user experience in the forefront. In fact, not only is the app built with responsive design, it actually also uses reactive design, meaning the layout of a particular post adapts to what seems to work best for the orientation and elements of the photo. Hi already deserves to be mentioned in the same breath as leading micropublishing tools, such as Medium, Svbtle, ReadyMag, and Ghost. Collectively, these tools are starting to push writers and creatives beyond the Wordpress era of Web and app publishing.

Beauty and accessibility aside, one risk Hi will face is falling into an App.net-like ghetto populated only by “elite” users who have little connection to the outside world. While it is easy to use, Hi still requires more work than Instagram, and it doesn’t have the filters or other masking mechanisms to dress up dross and make it look professional. For serious creatives, that’s a good thing. For the mainstream, it’s an impediment. Hi might still reach a mass audience despite that challenge – it helps that the tool is free and not shut behind the closed doors of a native app – but without the instant get-ability of Instagram, its growth curve may ultimately be a slow one.