There are a few interesting trends we can pull out of Pornhub's data dump: For example, in Indonesia, Yemen, Uganda, Saudi Arabia, and the United Arab Emirates, "Gay" is one of the ten most-searched/viewed categories. And yet, these are all countries that recently voted against a UN measure to protect citizens from extra-judicial killing on the grounds of sexual orientation. Despite what their political and religious leaders might say, gay people do live there after all. 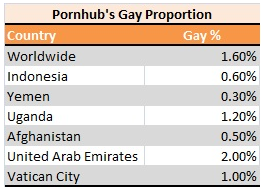 For Pornhub's part, these charts are part of an interesting trend of tech companies releasing data not to spy on its users but to answer sociological questions about human behavior. OK Cupid used to be at the forefront of this movement, releasing a number of interesting findings, like that women who enjoy exercising have an easier time achieving orgasm, that as men get older they prefer rougher sex more and more, and that vegetarians are more likely to enjoy giving oral sex. Sadly, OK Cupid hasn't updated the blog in over two years, but we're happy to see PornHub, a site with even an more intimate knowledge of its users' preferences, continue the tradition.