Political software is on the rise. Seeds is the latest example

In the last couple of years, the political world has seen the emergence of sophisticated -- and, more importantly, easy to use -- software tools that are commensurate with what’s long been available for consumers. With the likes of Rally, NationBuilder, and Optimizely changing the game for fundraising, campaigning, and analytics, politicians of all levels are increasingly able to run their campaigns on digital platforms with drag-and-drop simplicity.

Now a startup made up of former field organizers on President Obama’s 2008 election campaign is getting set to launch a tool, called Seeds, that matches the power of social media with the complicated logistics of volunteer coordinating. Built by National Field, which brought a Yammer-like social communications tool to the 2008 Obama campaign, Seeds is a hierarchical social network for campaign or nonprofit staff and volunteers.

Essentially, explains National Field co-founder and CEO Edward Saatchi, Seeds transforms the “Get Involved” button on any campaign website from a static form into a living connection between cause and supporter. Through Seeds, a volunteer or activist can maintain a profile that keeps track of every contribution she has made over the years and links her to other interests.

“Those people now will have one global profile that they can access anywhere that can show an entire history of their work,” says Saatchi, who is the son of British politician Maurice Saatchi, co-founder of ad agencies Saatchi & Saatchi and M&C Saatchi and, interestingly enough, given his son’s ties to Obama, a prominent conservative. 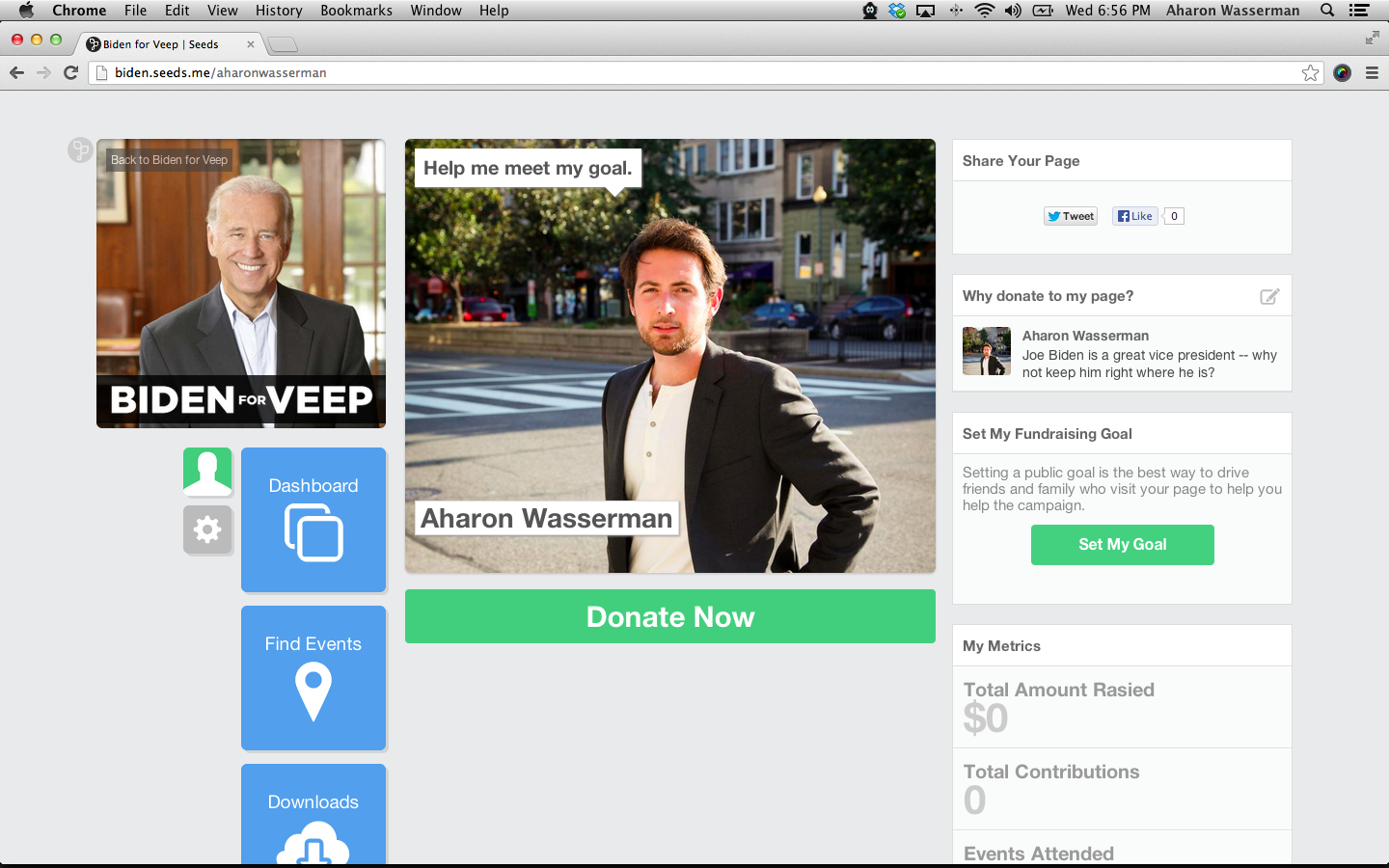 The National Field team has tried to put into Seeds the tools that are typically available only to the largest political campaigns and scaled them down so even people running for “Chief Dog Fetcher of Cedar Rapids” can use them. From a candidate’s perspective, you can create and publicize events just as you would on Facebook, share your latest news updates in a feed that integrates with Instagram, publish announcments, and customize a campaign website. It’s all easy enough to manage by the candidate without having a campaign staff.

The candidates will also be able to manage and incentivize volunteer via a dashboard that helps drive up engagement among supporters. For instance, the software will encourage volunteers to make more phone calls or raise more money in line with their past performance, and it will let them share those achievements with the community. If you’re not big on raising money but you’re willing to make a lot of calls, the software will pick up on that and ask you to hit the phones instead of donating, with prompts such as: “We know you made 30 calls yesterday, will you make 30 more today?”. 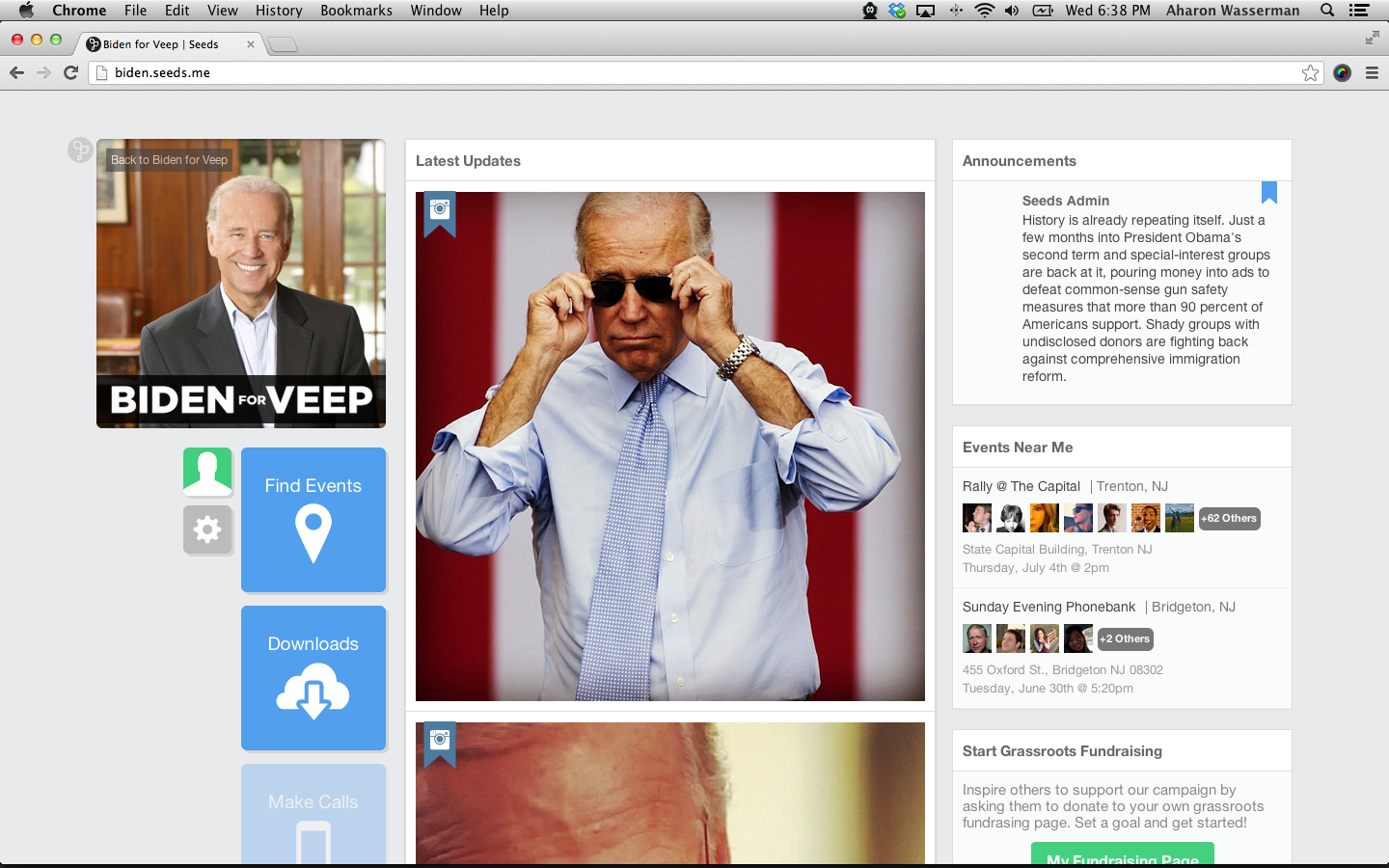 Saatchi and his National Field co-founders, Arahon Wasserman and Justin Lewis, met while volunteering for the 2008 Obama campaign and went on to turn the “internal social network” tool they had developed during the campaign into a commercial product that could also be used by nonprofits. Last year, the company raised $1.5 million in funding from angel investors, including Microsoft Excel creator Jabe Blumenthal and DirectTV co-founder Jim Ramo. The company used that money to build Seeds. The product is expected to launch in the fall, and the company will start by charging campaigns or nonprofits $99 a month to use the software.

Seeds is the latest addition to a growing suite of political software tools that are helping to democratize democracy. Because most people in the political world have come from policy backgrounds or academic institutions, it has not traditionally been an arena for cutting-edge software tools, to say the least -- especially when it comes to usability. As NationBuilder founder and CEO Jim Gilliam says, however, an increasing number of tech people who want to “do things that matter” coupled with feverish startup activity and product-mindedness in general is starting to filter into the political world.

Ironically, however, Seeds is a partisan product. It will be available only to progressive causes, says Saatchi. That means that even if a Republican were willing to pay for the tools, he wouldn’t be allowed to do so. Such is the way, sometimes, in partisan politics, as unfortunate as that is. Similar attempts have been made to build social networks for progressive communities in the past, says Gilliam, including ActBlue, which ultimately foundered. Gilliam expects Seeds will face similar struggles, “But this is the best attempt.”

Rally founder and CEO Tom Serres suggests Seeds’ vision might be too narrow. Startups need a broader view than just a political context, he says. He went through that process himself, starting the first iteration of Rally -- then called Piryx -- as a tool purely for political fundraising. He later learned that he would need to make a more consumer-driven product for his startup to really succeed as a business.

Rally’s donations function now powers a wide swathe of campaigns, from collecting funds for disaster relief programs to church charity fundraisers. Companies such as National Field, Rally says, might be better served by building a more general platform that can also be applied to politics, rather than the other way around.