Who killed the music industry?

By David Holmes
Aug 5, 2013 · 24 minutes
Be sure to check out the post on a desktop browser for the full interactive experience
Since 2000, the amount of revenue created from selling or streaming music in America has been cut in half, from $14.3 billion to $7 billion, according to that most despised trade organization, the Recording Industry Association of America, or RIAA. And yet listeners have more access to music than ever, and there’s nothing to suggest that demand for music is down.
So what or who is to blame?

Is it Apple’s fault for launching iTunes and forever severing songs from albums? Is it the record executives’ fault who, facing this shift from $17 albums to $0.99 singles, continued to rely on old, byzantine licensing and sales models, even as their industry hemorrhaged money before their eyes? Is Internet piracy to blame, with Napster forever changing the way we find and consume music, and BitTorrent bringing about the record industry’s worst nightmare? What about Internet radio stations? Are the rock-bottom royalty payments the result of corporate greed or government meddling? Do we blame Spotify and other music streaming services for striking opaque, unsustainable deals with record labels? And what about the unchecked proliferation of copyrighted material on YouTube and other platforms?

For this explainer, we looked to identify and unravel the complex network of industry stakeholders -- the rightsholders, including performers, songwriters, record labels, publishers, and licensing agencies, all of whom play a part in the process of making music, and all of whom expect a cut of the proceeds. There are the digital music sellers like iTunes and Amazon, which have supplanted brick-and-mortar stores and play by a different set of rules. And finally, the webcasters and streaming services, which struggle to achieve profitability even though they only pay artists fractions of pennies per song per play.

Follow us on a trip through recent music history as we try and figure out how we got here, where we’re headed, and whether today’s industry slump is a disruptive dip or the new normal.
During his most profitable year as frontman for the Dismemberment Plan, Travis Morrison made a whopping $23,000. He was 30 years old. Despite critical success and sold out clubs, the frenzied Washington DC-based post-punk-emo-dance band didn’t enjoy the financial success of so many other indie musicians of his era, whose music was palatable enough to sell cars in TV commercials.
“I was broke,” he says. “I was mad broke when we broke up.”
The year? 2003: iTunes had barely come out of the gate. YouTube didn’t exist. Neither did Spotify or Pandora Radio. Napster had shut down and it would be a year before BitTorrent would take off. In other words, even before technology turned everything upside down, it wasn’t easy for successful rock bands to turn a profit. Last year, in a New York Magazine piece about the economic realities facing musicians, Nitsuh Abebe asked,
“What does indie rock royalty buy you in 2012?” The answer? About the same thing it bought you in 2003.
Not that Morrison is complaining. “I get this memo that there are some bands who maybe did make a lot of dough from manufacturing CDs,” Morrison says, questioning whether these artists are rewriting history. Are they nostalgic for the money they once made or did they simply miss out on a cultural moment? “You always remember fun more than you remember payout,” he adds.
Now, after a decade spent working various day jobs including a stint at the Huffington Post and singing in his church choir, Morrison and the Dismemberment Plan are releasing their first studio album since 2001, entering an industry that’s been further upended by iTunes, streaming, and piracy. But before getting into how the current system works, it’s instructive to look back on how the music industry operated in the pre-digital days.
How do royalties work?
There are three situations in which a rights holder can receive royalties (OK, four if you count sheet music, but let’s not): Royalties are generated when music is purchased (mechanical royalties), when music is heard in a TV show or movie (synchronization royalties), and when music is performed (performance royalties).
Who gets paid?
There are five different parties that can claim royalty payments for a song: First, there are the performers and the songwriter(s). Then there is the record label, which records, distributes, and promotes the album, and thepublisher that owns part or all of a song’s copyright, and licenses it for commercial purposes. (Most major publishers are owned by or closely affiliated with major labels). Next, mechanical rights agencies like the Harry Fox Agency collect the royalties on purchased music and distribute them to songwriters. And finally, groups called performance rights organizations like ASCAP and BMI collect the performance royalties. That’s a lot of mouths to feed.
How much money does each party get?
That depends on the individual contract negotiated between the artist and the record label/publisher (it can also depend on the contract between the record label and streaming services like Spotify, but we’ll get to that). Despite the variability of contracts, there are a few trends and data points that paint a picture of how sales revenue was dispersed.
In 1995, on average 35 percent of the retail price of a CD went to the store, 27 percent to the record company, 16 percent to the artist, 13 percent to the manufacturer (even though it only costs $0.10 to $0.15 to make a CD) and 9
percent to the distributor. At the time it wasn’t uncommon for a CD to cost upwards of 17 bucks. In that case, the artist would receive $2.72 per CD.
But the musicians didn’t get to keep all that cash. There were “recoupable expenses” paid out of their share to cover recording, touring, and music video expenses. The lead singer of Hole, Courtney Love, wrote the definitive takedown of this model all the way back in 2000. She estimated that if a band made an album, sold a million copies, went on tour, and made two music videos, the band might break even, but the record label would take home $6.6 million:
“Worst of all, after all this, the band owns none of its work. . . they can pay the mortgage forever but they’ll never own the house. . .  The system’s set up so almost nobody gets paid.”Musicians can complain all they want about piddling Spotify and Pandora payments, but look at some of the piss-poor payouts artists from the pre-digital days received. R&B star Toni Braxton told ABC News that despite generating $170 million dollars in worldwide sales, she only saw $1,972 of that over her entire career. That’s 0.00116 percent. She declared bankruptcy in 1998. And while Braxton, a big seller in the 1990s, admits that her spending habits were a factor in going bankrupt, her record label didn’t do her any favors.
Big companies bleeding artists dry is by no means a new phenomenon.
Tech companies take over the music industry
It's not easy being a musician in these wild and crazy Internet times. Twitter, Kickstarter, YouTube... Enjoy a musical interlude starring an out-of-touch songwriter navigating New York's music scene, both on and offline:
Why did the industry tank?
As noted above, the whole music industry is shrinking: 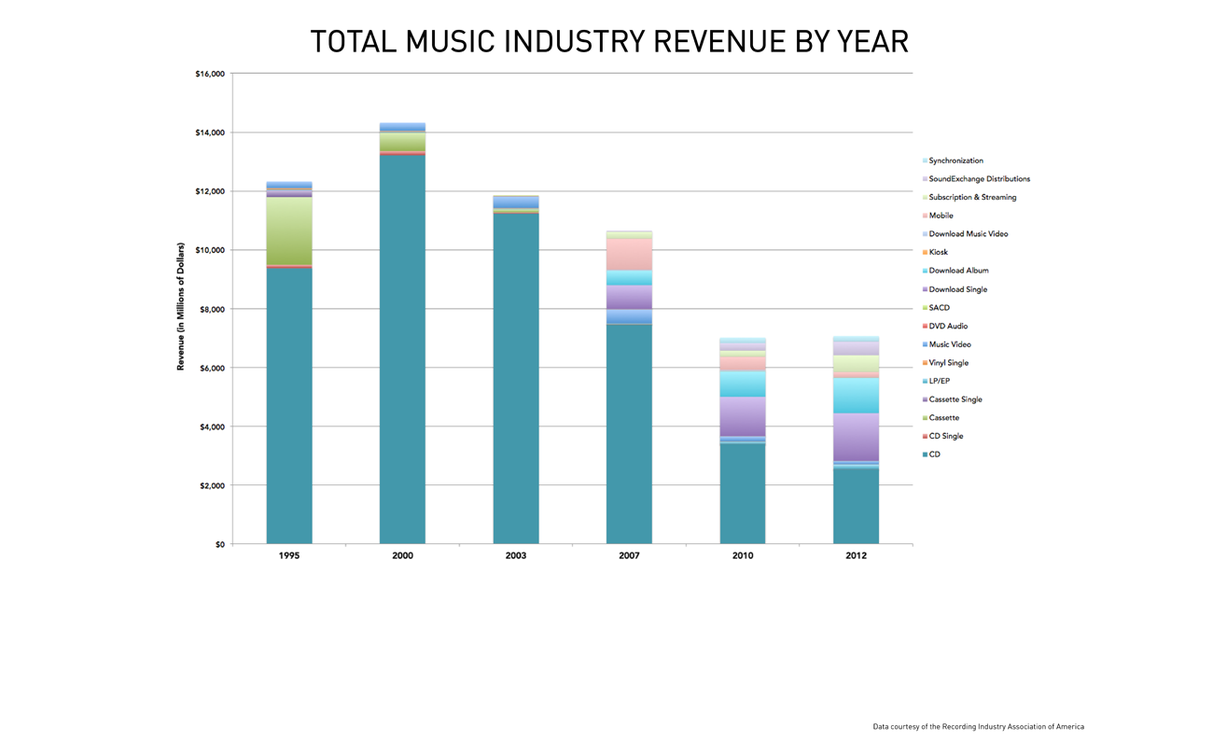 But before we get into the recent shrinkage, we can’t talk about the music industry without talking aboutNapster. In 2002, then-president of the RIAA Hilary Rosen said, without equivocation, that “Napster hurt record sales.” On the surface, she might be right. Between 1999 and 2001, when Napster was operating, the revenue generated by the music industry dipped from $14.6 billion to $13.7 billion: 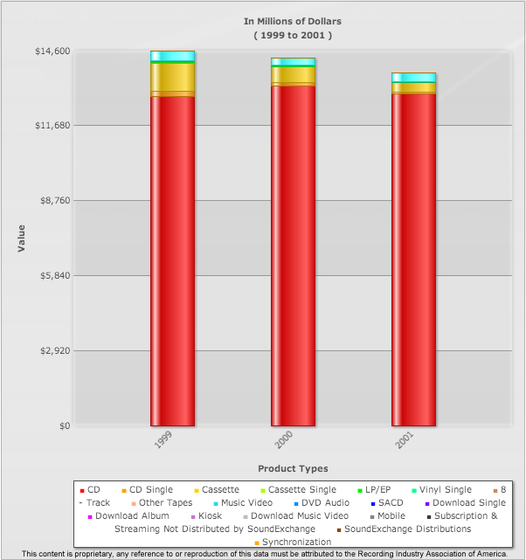 But let’s look more closely at the data. During that interval, revenue from non-single CD sales actually rose slightly, from $12.8 billion to $12.9 billion. It was the singles (and cassette tapes) that took the biggest hits. Before high-speed Internet became the standard in American households, it might take your average Napster user hours (or days!) to download one song. Twitter investor Chris Sacca, who used to work at a record store, told us at a recent PandoMonthly event that the Napster days were actually pretty good for CD sales. A person would download one song, fall in love with it, and then head to the record store to buy the CD rather than spend the better part of a week downloading it.Napster wasn’t the only factor at play. According to Business Week, labels put out 20 percent fewer new releases in 2001 than in 1999, and 14 percent fewer releases in 2002. Meanwhile, as the industry’s inventory shrank, its prices increased faster than the rate of inflation. Cultural forces were also at work. By 2003, the “boy band bubble,” which drove the massive successes of the Backstreet Boys and ‘N Sync, popped.
Did Napster hurt the music industry? Yes, but only indirectly, despite the recording industry’s claims, and in a far more disruptive way. It inspired Steve Jobs to create iTunes.
iTunes and the shift to singles:In a Rolling Stone article celebrating iTunes’ 10th anniversary, Steve Knopper writes, “Steve Jobs, Apple's founder and chief executive, saw Napster, MP3s and the Internet a different way. By late 2002, he believed music fans clearly wanted to download songs they liked in an affordable and easy way rather than driving to Tower or Best Buy or some indie record store to buy them on $15-to-$18 CDs. But during this period, the record industry had no affordable, easy and legal option allowing this to happen. Jobs saw opportunity.”
Jobs fought music executives hard on pricing. But in the end, the industry caved, desperate to convince a new generation raised on Napster to start paying for music, even if it was on Apple’s terms. But by ceding pricing, the record companies lost control of their product. Now albums were back down to an affordable $9.99. Singles were $0.99. On top of that, virtually any song was available as a “single,” not just the tracks chosen by the record label. Gone were the days of dropping $15 on one album for only a couple songs you liked. Just as newspapers became unbundled around the same time, with the expensive foreign bureaus no longer subsidized by the cheap, popular gossip pages, the album was similarly disrupted. An artist’s 8-minute instrumental Krautrock song was no longer subsidized by the bubblegum pop hit on Side A.
The data supports this consumer shift: Since 2004, when the RIAA began calculating digital sales, digitally-downloaded singles have outsold albums in terms of both revenue and units sold. 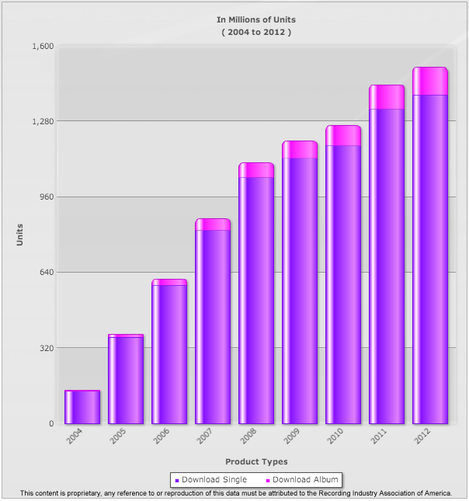 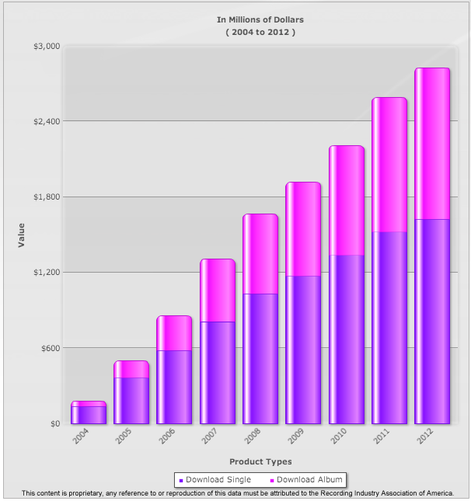