A small but significant victory for slow media

Google announced today that it will start integrating links to in-depth articles into its search results. So, if you search for “censorship,” says Google’s Pandu Nayak, “you'll find a thought-provoking article by Salman Rushdie in The New Yorker, a piece by our very own Eric Schmidt and Jared Cohen in the Guardian, and another great article about Iran.” That means longform journalism will be treated almost the same as news, which is already featured in many search results courtesy of Google News.

This is good news for people who care about “slow media” – the type of journalistic content that is not tied to a specific moment, that resists the eroding forces of faddism, and that favors quality over quantity. Not only does it unlock the power of the archive, but it sends a message that this sort of content, usually more nourishing than the “first draft of history” or slap-dash blog posts (such as this one!), deserves a pedestal that is different from, but equal to, that given to more time-sensitive information.

Now that we live in an age of Twitter, we are vulnearble to automatically placing a higher value on content that gets to us the fastest. Because of its ability to instantly satisfy this thirst for “newness,” Twitter emphasizes the now while eschewing the timeless. Until now, Google’s default settings have pretty much done the same. Type “Obama” into a Google search box right now and you’ll be delivered links to his Wikipedia entry, White House bio, and then three news articles relevant to today. Nowhere on that first page is there a link to, say, Dave Remnick’s biography of the President, or Michael Lewis’s inside look at the Presidency, published by Vanity Fair. 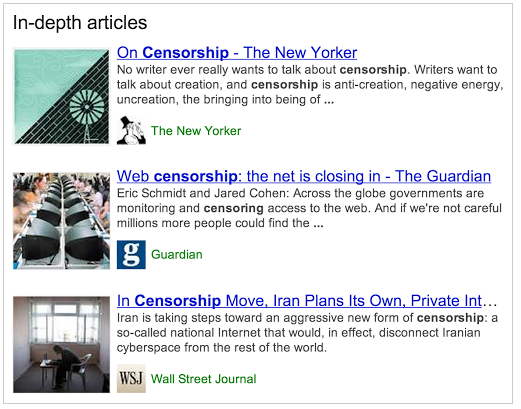 An example of Google's results for "in-depth articles."

The best thing about Google’s move is that it incentivizes publishers – no matter their brand – to produce quality longform reporting that carries the promise of being discovered in Google searches for years to come, potentially driving millions of new readers to their sites and staking a claim to a few pixels of history. While for now the results appear to carry a bias towards large, established magazines and newspapers, small-town papers or even blogs will be featured if their stories are especially definitive or informative, according to a Google product manager who spoke to GigaOm’s Jeff Roberts. He also said that Google in the future will display more than three article links in the results.

It would be great to see Twitter follow suit. Its search feature is also a powerful media-discovery tool. Perhaps one day it could offset its inclination to over-emphasize the moment by pinning to the top of its search results one to three relevant tweets or stories that stand up to the test of time. That action could provide valuable context for the disembodied news frenzy that explodes in times of big, breaking stories.

In the meantime, however, Google deserves credit for taking the lead on promoting longform content. It is a move that gives “slow media” the respect it deserves.