Quartz has reinvented comments. I wish it hadn't

This morning, Quartz, The Atlantic’s new-ish digital publication aimed at a business readership, launched a new commenting system. Taking its cue from Medium and RapGenius, Quartz is letting readers add notes to stories alongisde particular paragraphs. Instead of a long, unwieldy comment thread below each story, then, comments are confined to the right-hand sidebar and are viewable only when a reader clicks on a little “+” icon alongside the paragraph in question.

In part, the move suits Quartz’s format. The site is designed to facilitate an endless scroll of stories and was built with mobile devices and touchscreens in mind. That layout wouldn’t work if comments were jammed in under every piece. The sidebar comments are also an attempt to encourage discussions predicated on precision rather than general “This sucks!” trolling.

From Quartz’s perspective, there are other positives to the new feature. For a start, it gives them an extra revenue nugget – the annotations feature is sponsored by Citi, which gets the benefit of a brand impression every time a reader clicks to expand a comment box. (I hope the bank is paying handsomely for that.) It might also increase pageviews, because commenters are wont to come back to see who has responded to their thoughts. And, if it works, it should go some way to building some sort of community, because readers are required to log in before they can leave a comment. Plus, there’s all the usual bullshit about making the reader feel like they “have a voice,” etc. etc.

That’s all potentially good for Quartz, and in general, the world should welcome the experimentation with new discussion formats.

But the downsides? There are a few. 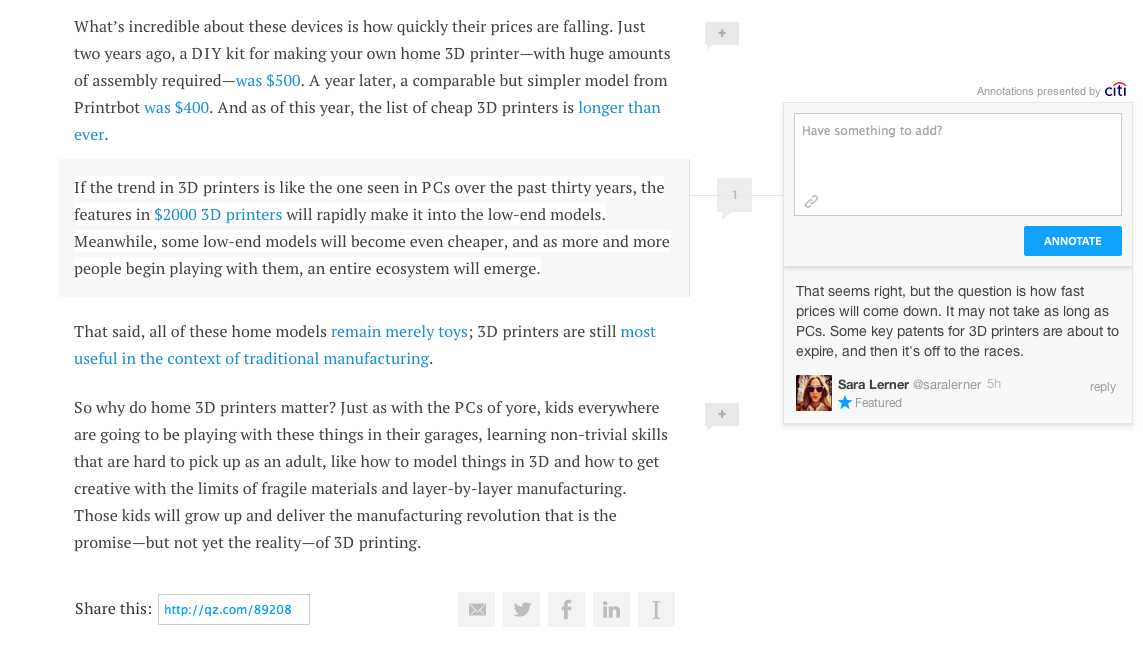 The new comments feature in action.

For a start, now every paragraph on Quartz comes with more visual blight. On the iPad, the + signs show up by default, and they pop up in the desktop version whenever your hover over a paragraph with your cursor. (They didn’t show up at all on my Android smartphone.) To that extent, the annotations create a “noisier” reading experience, cluttering up what was previously a pretty clean layout. That clutter serves as a distracting force. It’s now more difficult to read a Quartz story from start to finish without the niggling pressure of a comment begging to be clicked on. And those comments, except in the rarest of circumstances, are never more important than the story. They don’t deserve to live on the same piece of land.

Because they’re broken into pieces and distributed through the story, it is also impossible to quickly scan these comments. Often, the comments thread below a story is just a steaming heap of manure, but at least on other sites you can run your eye down the thread looking for anything that might pop out and actually add to the story. To do that on Quartz, you have to individually click through on each comment pod. Not to disparage Quartz’s readers, but the comments that have so far appeared on the site don’t justify that torturous filtering process.

(The Huffington Post, incidentally, has a smart approach to sifting for gold among comments: It uses semantic analysis to determine which comments should rise to the top.)

Mostly, however, I’m just pissed that Quartz succumbed to the supposed necessity of adding comments to its website. Update: Technically, Quartz has not "succumbed," because, as this blog post makes clear, it has been planning to do annotations since before it existed. (Of course, keep in mind that PandoDaily has comments, which I sometimes love and more often hate. Case in point for the latter.) By keeping reader voices out of its stories, Quartz distinguished itself from other digital-first publications as a place that just cared about getting you good information, news, and analysis. The writers were the writers, and the readers were the readers, and that relationship was working just fine. Discussions could take place on Twitter, where Quartz and its writers are very active.

Now, Quartz is just like the rest of us – seeking to capitalize on “feedback” from readers instead of preserving its previously pristine reading environment. Some might say that was inevitable, that you can’t turn down “engagement.” But that doesn’t make it less disappointing.