Elon Musk says Hyperloop won't run in a vacuum, hints at what's next

Elon Musk will announce the details of his much speculated-over "Hyperloop" on Monday, but today he let slip one more detail about his plans in a Google Hangout with Virgin founder Richard Branson – and he spoke of what comes next.

Despite much speculation to the contrary, the Hyperloop, which would let people travel at 700 miles per hour and move between San Francisco and Los Angeles in half an hour, will not rely on a frictionless tube. "It does involve a tube," Musk, sitting in a cushioned throne, told the Hangout, "but not a vacuum tube." The comment reaffirmed a tweet Musk posted last month saying the Hyperloop isn't a "vac tunnel."

The tube will be "very low friction," he said, but not frictionless. Then he demurred and said we'd have to wait until Monday for more details. He first mentioned the Hyperloop in public at a PandoMonthly event in July last year.

Musk – who founded Tesla Motors and SpaceX and was a co-founder at PayPal and is the chief financier for SolarCity – has revealed few details about the Hyperloop other than to say that it's a cross between a rail gun and an air hockey table. Last month, however, engineer John Gardi tweeted a sketch of what he thought the Hyperloop might look like, describing a tube-enclosed "air column" through which many cars will travel, powered by a magnetic accelerator. Musk responded to the tweet by saying, "your guess is the closest I've seen anyone guess so far." 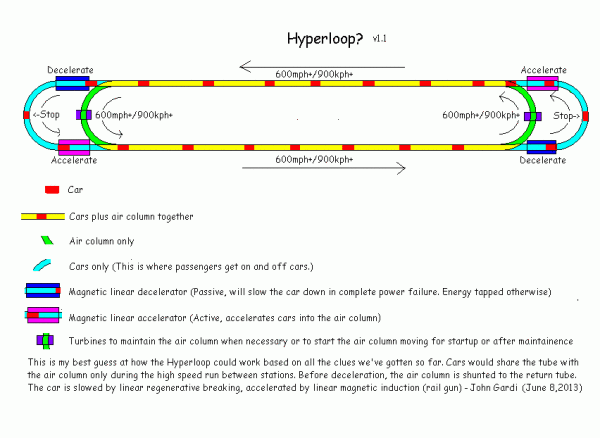 Musk told told the Hangout that he started thinking about the Hyperloop after being disappointed by California's plans to build a high-speed rail link between Los Angeles and San Francisco that would potentially be more expensive, and slower, than air travel. “I get a little sad when things aren’t getting better in the future," he said.

It's unlikely, however, that he will bring the thing into this world. On an investor call for Tesla Motors last week, Musk admitted that the Hyperloop is "extremely speculative," and that he doesn't intend to build it himself. Rather, he hopes that someone else will take the plans he has developed and handle the project.

Anyway, he's already thinking beyond the Hyperloop. Responding to a question about what's next on his list of big ideas, Musk outlined a vision for a supersonic aircraft that has an electric jet and can land and take-off vertically. "I think that is the ultimate form of transport," he said. (This aircraft is an idea he has discussed in passing before.)

Such an aircraft would be environmentally friendly, very fast, and it could land much closer to your destination instead of landing at huge airports with long runways.

For now, he has his hands full with Tesla and SpaceX, but he didn't rule out the idea of taking on the project himself.  “If somebody doesn’t do that, maybe at some point in the future I will.”

[Photo of Elon Musk with rocket courtesy of SpaceX]