Groupon's stock surge: Mobile is a treasure chest, if you can just unlock it

A year ago, the mobile Web was seen as something of a conundrum, a magical box of treasures with a lock clasped on it that nobody seemed to know the combination of. In the past few months, however, things have changed quickly. Companies are showing significant progress in monetizing their growing base of mobile users.

And in two cases, Facebook and Groupon, mobile is changing the way investors and others are viewing their outlooks. For these companies, monetizing mobile users isn't simply a necessity as consumers migrate to mobile devices, it's an opportunity to turn around business models that had been underwhelming investors for a while.

Two weeks ago, Facebook sparked a 45-percent rally in its share price by announcing that, not only had daily active users on mobile devices grown 60 percent to 293 million, but that the news-feed ads Facebook was serving them were working: Mobile ad revenue rose 75 percent from the previous quarter to $656 million, making up 41 percent of total revenue.

This week, Groupon followed with an earnings report that carried its own set of surprises. The headline numbers weren't so great: The $609 million in revenue was only slightly higher than analyst expectations, and the two cents a share in profit was right in line. And the guidance of earnings per share this quarter (between a one-cent loss and an one-cent profit) was below the five cents Wall Street had been modeling.

Yet Groupon shares surged 22 percent to $10.60 Wednesday on the news. Part of that was the $300 million Groupon said it would devote to buying back shares, a much needed liquidity boost. Part of it was the announcement that co-acting-CEO Eric Lefkofsky would be Groupon's CEO, eliminating the uncertainty of a CEO hunt and learning curve that an outside CEO would have needed time to ascend.

But as investors and analysts parsed through Groupon's numbers, it was the company's performance in mobile that stood out. Where Facebook is monetizing mobile apps, Groupon has stumbled into a way to monetize mobile commerce. Groupon's mobile app was downloaded more than 7.5 million times last quarter, an increase of 400,000 from the previous quarter and bringing total app downloads to 50 million. It's not just that downloads of Groupon's app are accelerating, it's why.

Groupon started out offering daily discounts through email, an approach that appealed to bargain hunters in the recession but that soon grew old. People tired of sifting through email deals from Groupon, LivingSocial and others. They grew weary jumping on ephemeral deals that time and perspective showed to be impulse buys. The daily deal became a passing fad.

So Groupon expanded into a searchable deal database, where discounts lasted much longer and were designed to appeal more to bargain browsing than impulse buying. It turns out that Goupon's deal bank may be well suited for mobile devices. It doesn't depend on emails or other push notices. If consumers aren't certain about a discount, they can take their time deciding on it. The broader offering of deals (54,000 in June, up from 47,000 in March) means that on a given day, many users have several discounted meals or services within driving distance.

Groupon's mobile app is designed to exploit these features. It's an old-fashioned coupon book on a smartphone. In that sense, it's a local e-commerce product that works. In its earnings slides, Groupon said that nearly half of North American transactions were completed on mobile devices in June, compared with about 30 percent a year earlier. That increase is comparable to the rise Facebook has seen in its mobile usage.

Even more than mobile ads, however, local commerce has long been an elusive goal. What made it especially frustrating was that mobile devices seemed ideal for making local commerce work, since people had information on nearby shops in their pockets. Google tried to crack this nut with Google Local and later its purchase of Zagat, but with mixed results. Services like OpenTable, Yelp and others have attacked it in different ways, again with mixed results. Groupon and LivingSocial did it with daily deals, with results that were very impressive before they were very expensive and disappointing.

It's still too early to say Groupon's app and deal bank will work any better in the long run, but for now there's reason for bulls to hope. Discussing Groupon's earnings on CNBC Wednesday, Piper Jaffray analyst Gene Munster said, “The concept of everybody looking for a good deal isn't going to change over the next decade. So I think that this actually becomes an investable story over the long haul, which a year ago it wasn't.”

What's working at Groupon looks like it's working by accident. The deal bank and mobile app are things the company hit on through trial and numerous errors – something that wasn't in its original DNA but that it evolved toward. Under Lefkofsky's influence, Groupon has always taken a spaghetti-on-the-wall approach: Toss everything up there and see what sticks. This quarter, investors (who don't care if something succeeds by design or by accident) believed they saw something sticking.

That approach is much like Facebook's with mobile ads. The company went public without a clear mobile-ad strategy and spent much of its first year in the stock market scrambling to find something, anything, that works. With news-feed ads, along with multiple initiatives to mine user data to target ads, Facebook is finally winning ad dollars from reluctant advertisers.

I have not been very bullish on Groupon's outlook and unlike some analysts I'm not ready to change my view. But I do know that companies can fail their way into a successful market (what some generously call pivoting), and Groupon is showing signs of being one of them. But there are still some other, worrying signs. 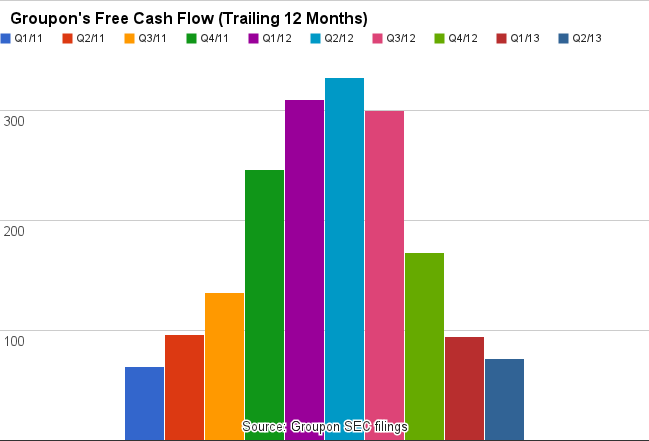 A few months ago, I noted that Groupon's free cash flow, a measure of a company's ability to finance growth through its current business - had been declining for several quarters. This quarter, free cash flow fell to $29 million from $49 million a year earlier. On a 12-month basis, that figure fell to $75 million from $95 million. Until that trend reverses, the growth Groupon is seeing may be outweighed by the costs of fueling it. Which has pretty much been Groupon's story so far.

And then there's the company's valuation. It's trading at 62 times its forecast earnings for all of 2013. eBay, a company Groupon likes to compare itself to, is trading at 20 times this year's earnings. Yes, Groupon is trading at a 13-month high and it's risen fourfold from its November 2012 nadir of $2.60 a share. But it's also about half its $20 offering price. Yes, the stock market believes Groupon is worth $7 billion. But remember when Google was willing to pay $6 billion for Groupon? That was nearly three years ago. Since then, the Nasdaq Composite has risen 45 percent.

In other words, Groupon under Lefkofsky is showing signs that things are turning around. Yet it's still risky to declare with certainty that Groupon has unlocked the mobile treasure chest. Which means, for Groupon investors, it's that much riskier.