Report: Young companies destroy more jobs than they create – unless they're tech companies

Hey, startup world, some cause for alarm: On the whole, young companies destroy more jobs than they create. That's because so many of them fail.

But there is some solace: Young tech companies create many more jobs than they destroy, even taking into account a high failure rate.

These are the findings of a new report, “Tech Starts: High-Technology Business Formation and Job Creation in the United States,” co-sponsored and released today by Engine Advocacy and the Kauffman Foundation. The report shows that about half of all young companies fail within their first five years, resulting in the loss of a lot of jobs. Of the companies that survive, however, businesses aged between 1 and 5 years create net job growth. And if those young companies happen to be tech startups? Well, they create a lot more job growth than the rest of the private sector.

While private sector business creation fell 9 percent between 1980 and 2011, the birth rate of new tech businesses was 69 percent higher in 2011 than it was in 1980, according to the report. Over the same period of time, the job-creation rate of those young tech firms – aged between 1 and 5 years old – was twice as robust as the average rate for firms in the rest of the private sector. That’s partly due to what the report cites as the “up-or-out” dynamic: tech startups tend to either fail quickly or grow rapidly.

The graphs below, prepared by Engine Advocacy, help tell the story. (Note: The "total private" figure in the graphs below includes tech companies.) 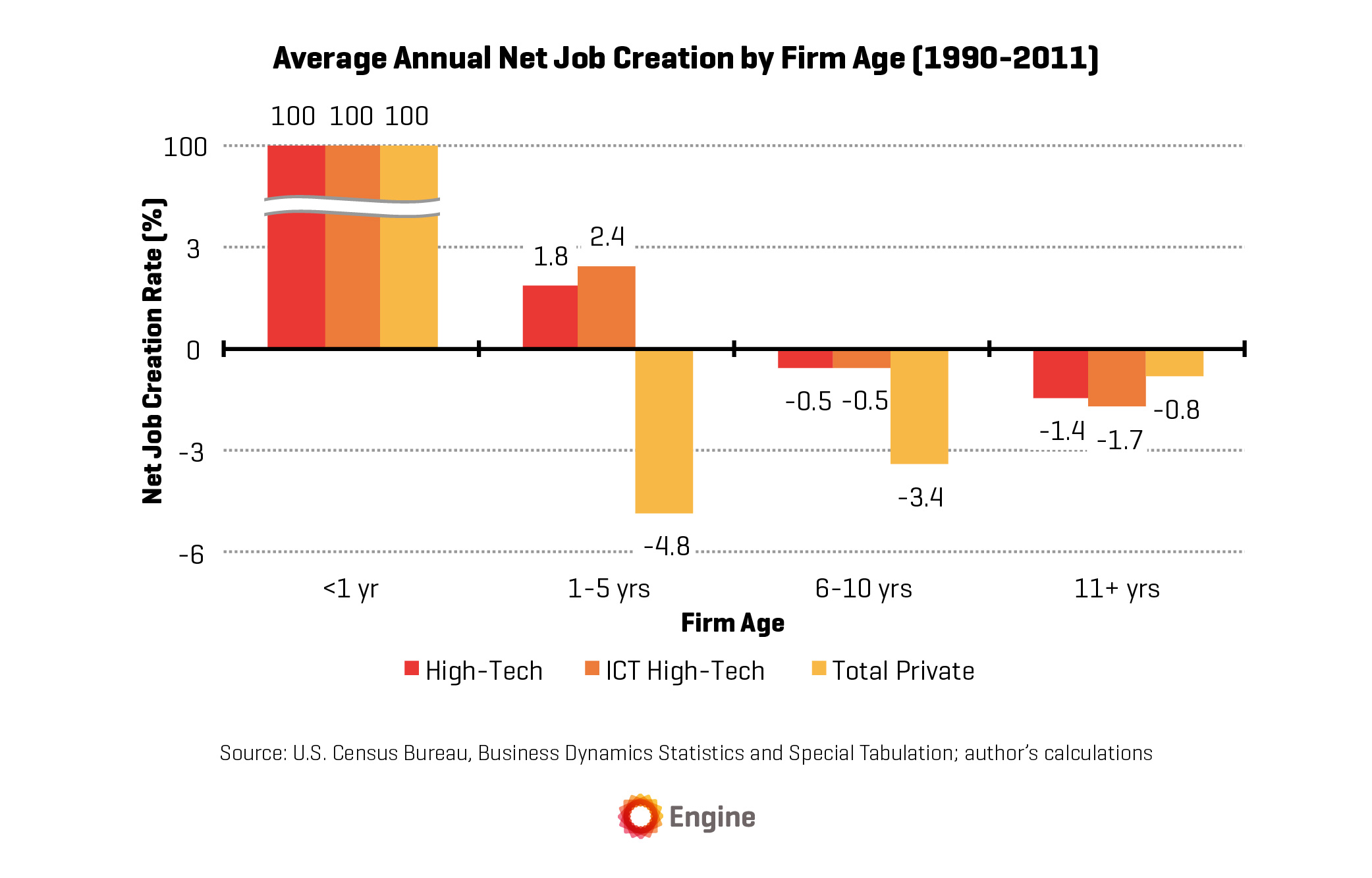 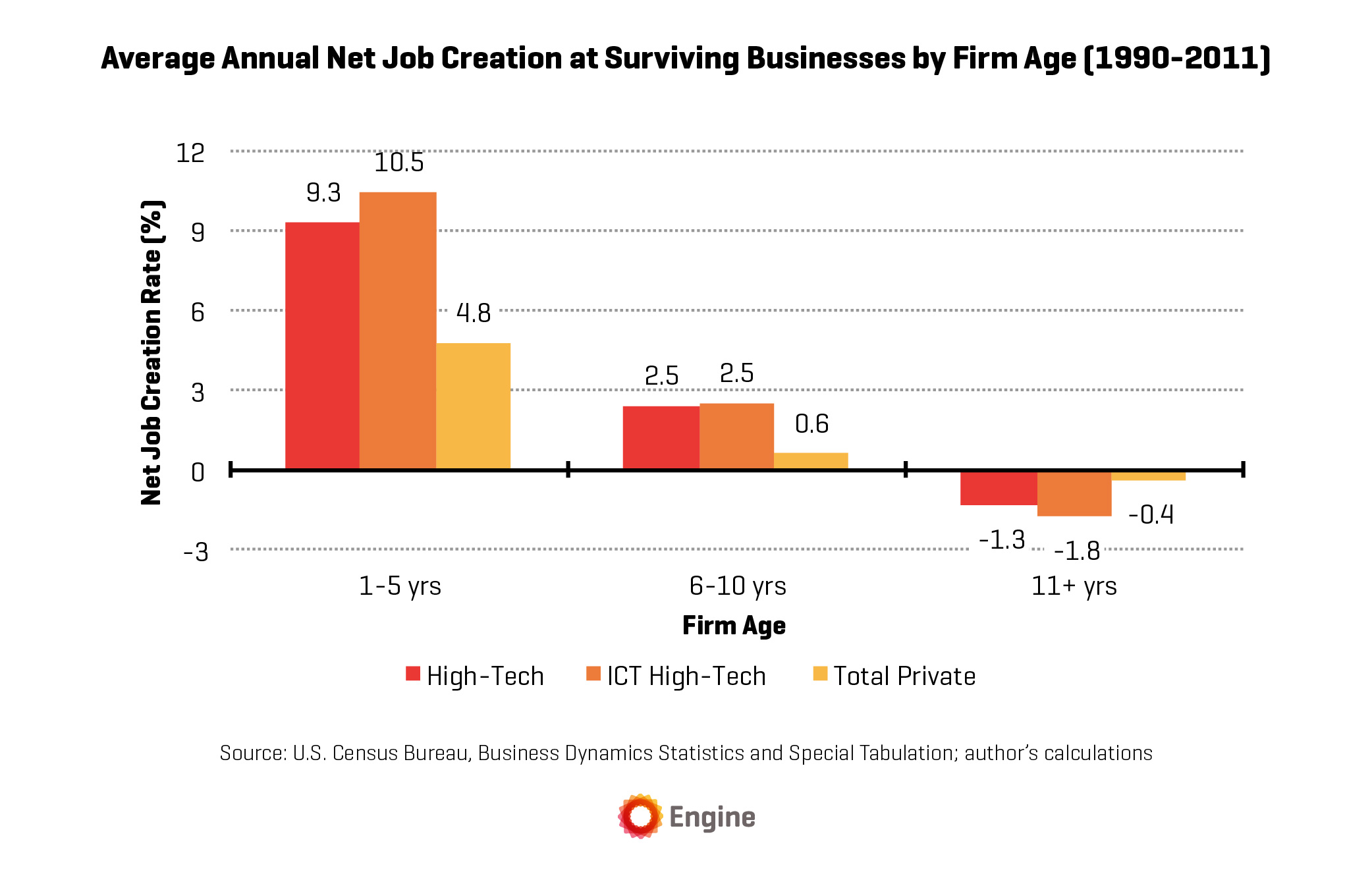 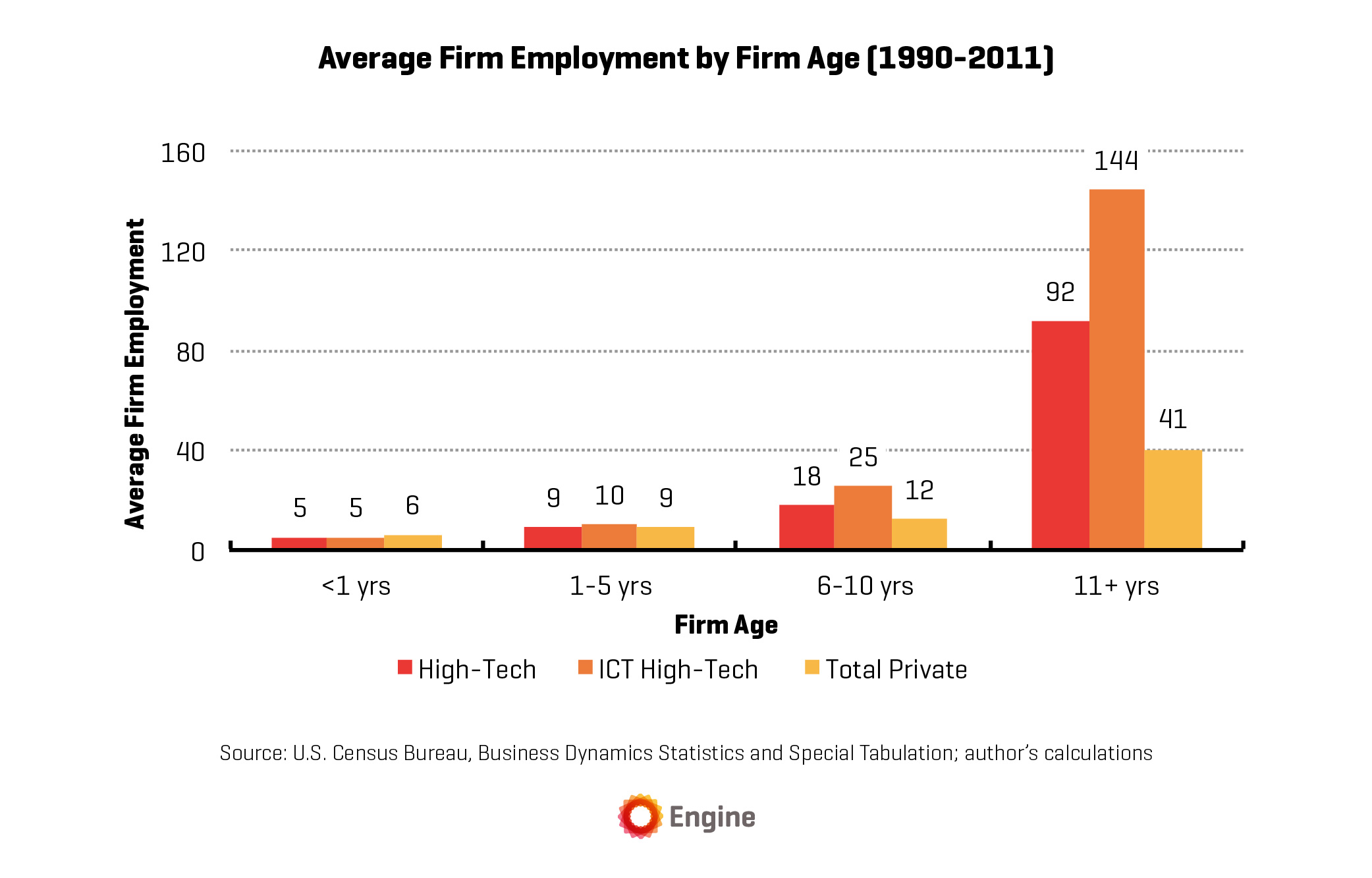 The report also found that high-tech startups are becoming increasingly diverse. While most such young companies were clustered in major metro areas with high-skilled workforces, when scaled for population they appear relatively well-spread across the country. The concentration of young, job-creating businesses is pronounced not only in well-known tech hubs such as San Francisco and Silicon Valley, but also in smaller university towns, and cities in which defense and aerospace industries have a strong presence. 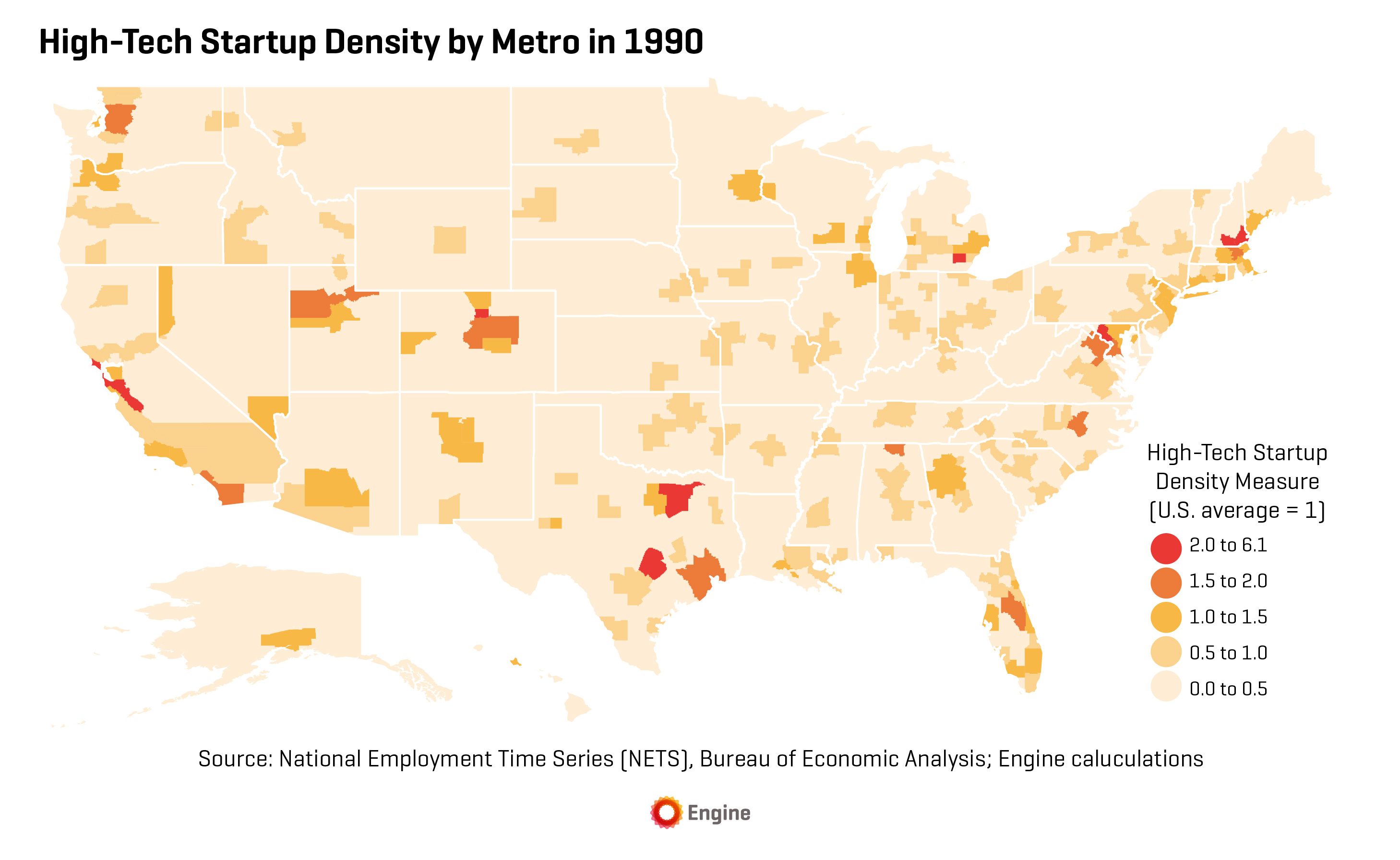 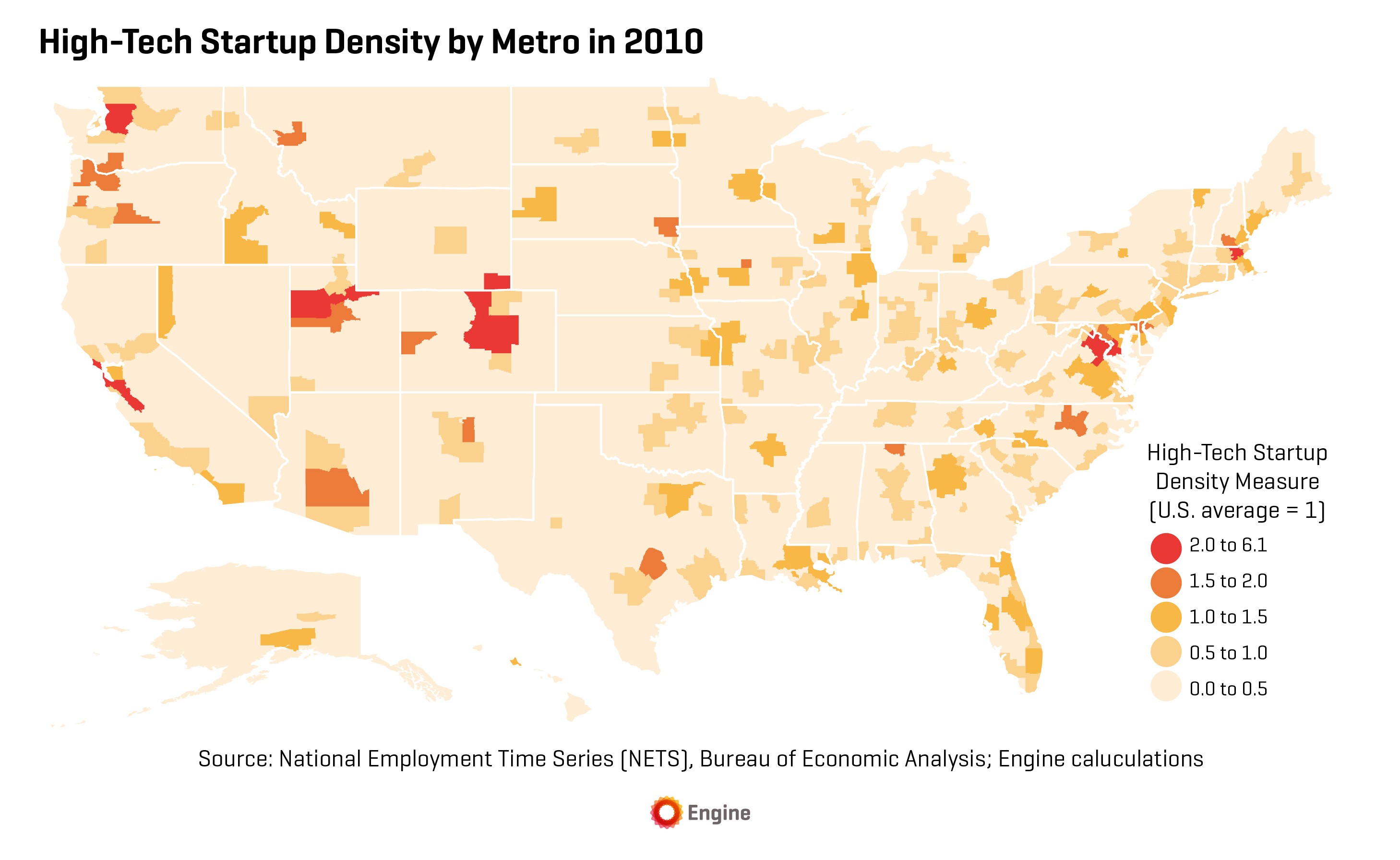 “High-tech startup growth rates have been strongest, on average, in regions with lower densities,” writes the report’s author, Ian Hathaway. “The opposite has been true for firms across the entire private sector, where new firm formations have been concentrated in regions with already higher levels of entrepreneurship.”

Hathaway concludes – perhaps not surprisingly for a report commissioned by entrepreneurship-advocacy organizations – that the broad-based growth in high-tech startups is encouraging because entrepreneurship “is an important source of productivity growth for the US economy.”

Top 10 Metro Areas for High-Tech Startup Density  * "High-tech" defined here as the group of industries with very high shares of employees in the STEM fields of science, technology, engineering, and math.