Soon, we'll all be Nate Silvers

We're fast entering an era in which we can all become Nate Silvers. The pundit, whether he be of the political or sports variety, is on his way out. Gut calls on important things like election results or who Billy Beane should put in the Oakland A's just won't do.

We now demand a higher standard of proof for predictions.

We now need to optimize our operations and products based not on popular opinion, but on probability.

The good news is we're all going to get it. Even the most mathematically-deprived brains will be able to tap into large data sets and make sense of them without so much as ringing a bell curve. Startups like Mixpanel, Spinnakr, and Ayasdi are rushing to arm us with tools for analyzing complex data sets without stressing a neuron.

Ayasdi in particular is pushing to make data science mainstream. The Palo Alto-based company, whose most prominent achievements so far included the discovery of a previously undetected type of breast cancer, appears to be doing its best to grab the world's attention by showing its strengths in sports.

Now Ayasdi is taking its sports wizardry across the Atlantic, showing how its data visualization can reveal unexpected patterns in statistics gleaned from the English Premier League.

As the new soccer season was kicking off, Ayasdi teamed up with the Economist to show how, Moneyball-style, you could assemble competitive teams for a fraction of the expense that most cost to put together today.

Relying on stats provided by Opta Sports and TransferMarkt, Ayasdi and the Economist analyzed more than 500 players across 191 categories, including goals scored, tackles, and time played. 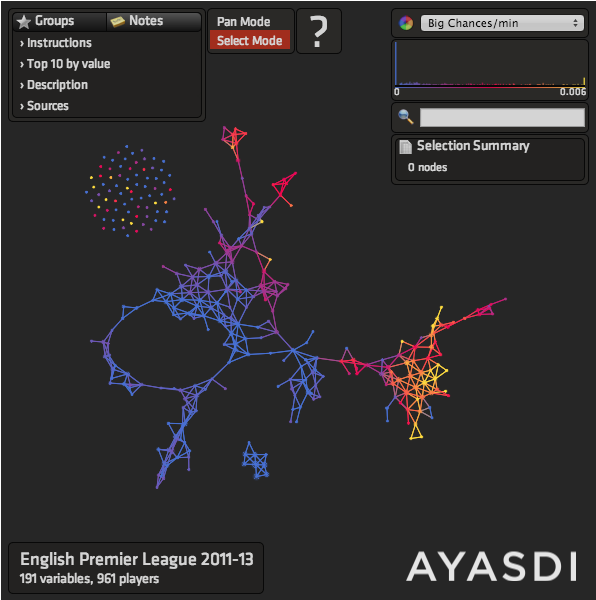 Ayasdi's data visualization tool for the EPL. (Screenshot via The Economist.)

By using a visualization tool provided by Ayasdi, the Economist lets readers group players by, say, number of goals scored per minute, or number of big chances per minute. By selecting a particular cluster on the chart, users can see how players can perform compared to each other, and which ones are most similar to each other. (Ayasdi produced an explanatory video to accompany the tool.)

Effectively, you can construct your own fantasy football team, based on whatever metrics you determine are most important.

An example: Included among the insights that the Economist derived from the exercise was that Tottenham Hotspur star Gareth Bale, whose contract is worth $130 million, exhibited similar qualities to Manchester United's Danny Welbeck, Southampton's Gastón Ramírez, and Norwich FC's Robert Snodgrass, all of whom cost their teams a fraction of Bale's price.

The Economist rightly warns against placing too much stock in the statistics – “two players may cover the same distance during a season, but one may spend his time running in the wrong direction"" – and says that managers aren't about to be replaced by mathematicians any time soon. But Ayasdi's tool and methods, which allow you to find patterns in data sets that you weren't even looking for, hint at how big the Big Data future might be in sports.

One of the keys to Ayasdi's approach to interpreting data is that its models are dynamic and adaptable, allowing you to make adjustments on the fly. That can come in useful particularly for soccer, where the action is in a constant state of flux and players tend to get injured.

Aside from pundits and scouts, perhaps the people who have most to worry about when it comes to that future are the players themselves. Football clubs have proven willing to pay big money for players whose prices have in part been driven up by their brands and surrounding hype. Increasingly, however, everyone will have access to tools that reveal exactly how much value their teams are getting on the dollar.

In which case, perhaps the better branding is Saveyourmoneyball.