Distortion meets disruption: The crossover between startups and indie bands

[Image via The Dismemberment Plan]

Next month, Travis Morrison and his band The Dismemberment Plant will embark on a 13-city tour of the United States. On October 15, the iconic indie band will release “Uncanny Valley,” its first studio album in 12 years.

At the same time, Morrison is deep into his work on Shoutabl, a startup he co-founded with fellow musician-turned-entrepreneur Travis Donovan. The two used to work together at the Huffington Post, where Morrison was director of commercial development and Donovan was executive editor of editorial products and social media. Shoutabl, a self-serve Web platform for bands and musicians, is currently in beta, but it is set for a full launch later this year.

To say that the two projects, the band and the startup, are all-engrossing endeavors is obvious understatement. And yet Morrison, at 40 years old, is somehow managing them both. It helps that he has reached a point in his life where he knows how to get stuff done on a timetable. But it also doesn’t hurt that the two ventures share remarkable similarities.

“I would say this is the second company I’ve founded,” Morrison says of Shoutabl.

The Dismemberment Plan formed in 1993, released four studio albums – including the acclaimed “Emergency & I” (1999) – and split up in 2003. The four band members reunited for two shows in 2007, and then again in 2010. They’ve stayed together ever since, even as Morrison has held down full-time jobs and ultimately leapt into entrepreneurship.

All the while, the Plan has held onto its indie cred, sticking to smaller labels – Partisan Records, DeSoto Records, and Interscope, which is owned by Universal – and managing its own affairs. As the Plan grew in popularity, it eventually became its own business, creating products, building a consumer base, and making and spending money.

“I didn’t start The Dismemberment Plan with this urge to do a business,” says Morrison over the phone, “but it turned into one.”

At times, he felt burned out by treating the band as a business – “Once you make the decision to run a band like a business, you have to go into all the way” – but it ultimately stood in him good stead for his future life as an entrepreneur.

As someone juggling life in a startup with life in an indie band, Morrison is a rarity but not an oddity. He is part of a small group of indie musicians who have also chosen to enter the world of startups. Startups such as Lyft, Pond5, Bitly, and OkCupid have boasted musicians representing bands such as Bishop Allen, Rio Rio, Beirut, Bright Moments, and Yellow Ostrich, as well individual artists. I talked to a few of them for this story. They all acknowledge the similarities between running a business and running an independent band. 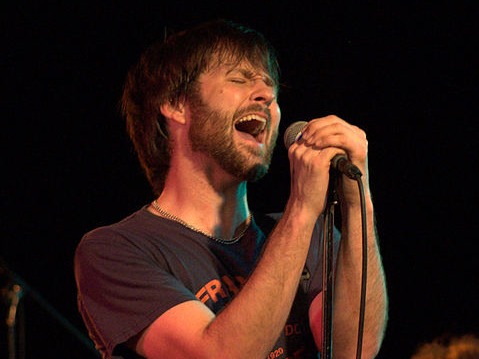 Travis Morrison of The Dismemberment Plan and Shoutabl. [Image via Wikimedia]

As a reporter who covers startups and is also a fan of indie music, I started working on this story with a theory that the two worlds are increasingly colliding, and that it makes sense that each feeds on the other. Thanks to the likes of Spotify and YouTube, I figured that indie artists have been reaching a wider audience of late, achieving more mainstream acceptance in the process. I thought that might help explain why the likes of Vampire Weekend, Bon Iver, and Lorde – acts that once may have been considered too cool for commercial radio by parties on both sides of the equation – have found crossover success in recent years. At the same time, I reckoned, startups are increasingly seen as hip and desirable career options, with movies such as “The Social Network” and “Jobs” contributing to the calling’s “cool” cachet. As career-cool meets creative-cool, I figured, why wouldn’t it be the case that there is considerable overlap between the two?

Turns out my theory was horseshit.

Morrison would straight up tell me: “I don’t like your theory.” Someone else pointed out that indie bands have been crossing over since the days of Nirvana, while The Strokes, The White Stripes, Modest Mouse, and Arcade Fire have all done the same since. Asking around, I ultimately found very few people who were successfully managing to juggle startup life with indie music life. And that big cultural moment of Web technologies pushing indie bands to new audiences? Well, that can be traced back to MySpace, founded in 2003.

If I was wrong about the worlds overlapping, however, I think I can at least claim the point that they are increasingly moving closer together. That much is evident in the preponderance of startups that count indie musicians as key customers, including not only streaming services such as Spotify, Rdio, and MOG, but also concert-booking apps (WillCall, Timbre, Songkick, Preamp), distribution networks (Soundcloud, Bandcamp, Beatport), and service platforms (Shoutabl, Jingle Punks, and Marmoset Music, which Erin Griffith wrote about today), to name a few.

The narrowing of that gap between startups and indie music is also apparent in the number of festivals popping up across North America that fuse music and tech. There is, of course, South By Southwest, which added the Interactive conference (initially called SXSW Multimedia) to its festivities back in 1994. But the “indie music meets tech” festival genre has surged more recently. For instance, there’s Portland’s XOXO, Silicon Valley’s C2SV, Toronto’s NXNE, and the tandem MSFW and TFNW festivals, also in Portland. (You will note, I hope, that it is essential that your tech-music fest be identifiable by a four-letter acronym.) In Tennessee, the Southland technology conference butts right into Bonnaroo.

Hugh Forrest, the director of SXSW Interactive, backs up the “gap is closing” narrative. “In the earlier years of [SXSW Interactive], there was a big division in terms of the kinds of people attending, and you could really see when the tech folks were in town and when the music people came in town,” he says. These days, however, the geeks and entrepreneurs are rock stars too. “It’s much less a division than there ever was before in terms of just the demographic.”

Culturally speaking, the groups aren’t all that disparate, even if, traditionally, their jeans vary in degrees of tightness. Entrepreneurs and indie musicians are united, at least, in their DIY spirit and bucking of the status quo.

“They share a fondness for this concept of revolution – ’disruption’ is the tech word for it – pissing off the parents and driving forward the zeitgeist,” says K. Tighe, a former music journalist who is now chief communications officer at WillCall.

The Dismemberment Plan’s Morrison likens building products in a startup to writing a song. “Getting a product done that people can use and people really like, that’s a really special feeling.”

Also, he says, people who are into indie rock tend to be interested in the infrastructure of the creative sector, too. Many indie musicians work at venues or labels, while music blogs and magazines pay close attention to particular bands’ business practices. While that focus on financial considerations discomforts Morrison, he does think it has a flow-on effect when it comes to business. “Indie rock does lead to interesting startups because of that interest in the business of art, especially the small business of art,” he says.

Speaking at an Ignite NYC event at the end of 2011, Matt LeMay, a musician, coder, and music writer who recently left Bitly and now plays drums for the band Kleenex Girl Wonder, made the link between startups and indie bands even more overt. In a speech entitled “My New Software Company,” he jokingly called music “stupid and expensive software.” But because music is so dumb, he offered, musicians have to be really smart entrepreneurs.

Can you imagine walking into a venture capitalist office and pitching this business model? You would be laughed off the face of the planet, and you would deserve it. But that’s what bands do every single time they raise money, whether it’s via Kickstarter or directly from a record label.

LeMay’s fellow startup-musicians agree that musicians have to be smart entrepreneurs, whether they like it or not. Christian Rudder is a founding member of Brooklyn’s Bishop Allen, and he is also the cofounder and president of dating site OkCupid. Like Morrison, he says being in an indie band is like running a small business. “Bishop Allen was a lot like that,” he says. “We had to manage a lot of bullshit.”

Most of that bullshit, he says, was financial minutiae, but it also came with the self-promotion. Bishop Allen got started in 2003, before MySpace even arrived. In those days, the band’s idea of distributing music via social media was mailing CDs to people. “The hustle is definitely the same,” Rudder says of the parallels between startups and indie music. 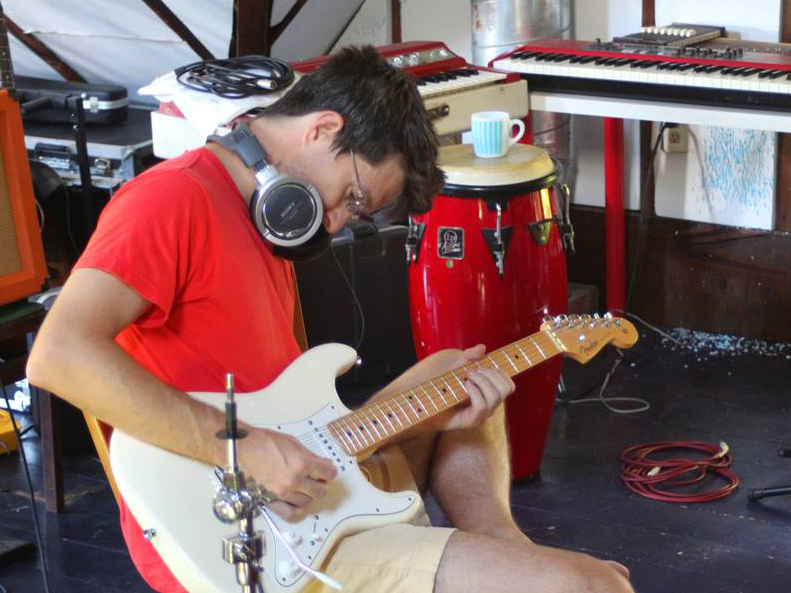 One key difference, though? In a startup, you can’t afford to let the intensity drop.

“The one thing that’s different is indie music you can succeed even if you’re kind of easy-going,” says Rudder. “To some degree that helps, because you can get a manager to be the hard-ass for you. Obviously, if you have an easy-going manager, you’re probably fucked.”

One hungover morning towards the end of SXSW Interactive in Austin last year, I got talking to a guy I met at a breakfast taco truck. He worked in communications and business development for New York-based stock-media startup Pond5 and was at the conference for work reasons. But he was also going to stick around for SXSW Music, because he played keyboards for a band called Bright Moments that would be playing there.

His named turned out to be Jared Van Fleet, and he had been in a few bands in his time, including Beirut, as well as putting out music under his own name. Now Van Fleet is in a group called Yellow Ostrich. He spends between 15 and 20 hours a week on his music, and at least 40 hours a week at his day job. Last year, he spent six weeks on tour.

Van Fleet now says balancing the two lifestyles is difficult, but actually do-able, especially given that he can work for Pond5 remotely even while on tour. Juggling the two occupations can be arduous and it wouldn’t be possible if he were in a “super famous” band, but each pursuit stimulates a different part of his brain, he says. “All of this stuff is fun, which makes it easier.”

Perhaps the most important commonality between startups and indie bands is that they are both fuelled by passion. “Ultimately neither of these are very stable jobs in that sense,” says Van Fleet. “The end can’t justify the means. You have to believe in it. Then you spend time trying to convince other people that it’s worth believing in.”

It is perhaps no surprise that the personality traits that attract people to such uncertain pursuits can be found in both musicians and entrepreneurs. For people like Travis Morrison, Christian Rudder, Matt LeMay, and Jared Van Fleet, risk, volatility, and insecurity aren’t turnoffs – they’re the whole point. They are necessary and inextricable parts of the creative milieu.

“I don’t understand looking at the music industry and thinking it’s hard and it’s scary and it’s not fair and it’s unpredictable,” says Morrison as he contemplates The Dismemberment Plan’s next big outing. “I don’t know what you’re doing there if you don’t like those feelings. It’s about culture, it’s about the emotional impact of art, it’s always redefining yourself. It’s prone to wild shifts in where you’re money’s going to come from.”

Such a life, he concedes, is definitely turbulent. But then, some people like whitewater rafting in life.

The Dismemberment Plan is coming to your city soon.