It's really not that hard, people.

Ever since Oreo picked up thousands of retweets and inspired dozens of thinkpieces for its hasty Twitter ad about the Super Bowl blackout, the art of brands capitalizing on trending topics (you know, what we used to call "news") has spiraled out of control.

But while it's one thing to hop onboard a light fun story like the Super Bowl or the royal baby, the Golf Channel thought it was appropriate to do this on the 50th anniversary of Martin Luther King Jr.'s "I Have a Dream" speech (the tweet has now been deleted): 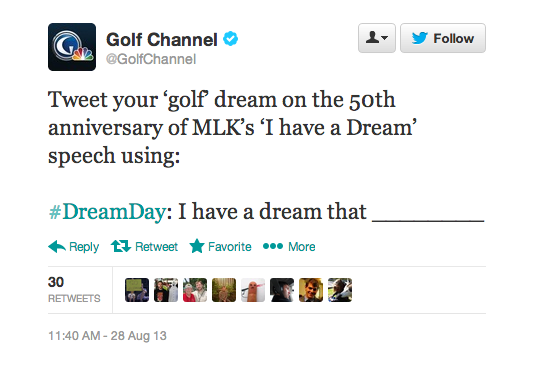 First of all, I can't think of any activity farther removed in tone from the fight for social justice than golf. It's what rich people do when they're bored. But the lesson goes beyond the Golf Channel. The "I Have a Dream" speech is not about brands. Not yours or anyone else's. And the fact that it's "in the news" does not give you a right to exploit it for some lame attempt at "customer engagement."

It's an easy rule to follow. Is the news item in question about something entertainment-related? Then, yes you can exploit that. It's tacky, but no one will criticize you for it. But does the news item involve centuries-old institutional patterns of racism and disenfranchisement? Then, please keep your brand out of it.

Though it's not like brands will heed this advice. We already went over this with Taco Bell on Martin Luther King Day last year. In other words, this probably isn't the last we've seen of the insensitive topical brand tweet.

Just to show that not everything people are tweeting about the Dream speech is awful brand-speak, check out NPR's excellent @todayin1963 account, which is live-tweeting "updates" from the March on Washington all day.