While Fitbit, Nike+ Fuelband, and Jawbone Up continue to capture most of the attention in the fitness-tracking market, two Finnish startups think fitness apps are better suited to smartphones, because they can give a better sense of overall physical activity.

Last month, a two-man startup based in Helsinki shot to the top of the fitness category in Finland’s App Store when it released a $1.99 iPhone app called Fjuul (pictured above; say it like "Fuel"). Fjuul’s founder Sascha Wischek thinks that wearable devices only capture a small percentage of everyday physical activity because they don’t account for incremental indoor exercise, such as the lite work-outs you get while doing the vacuum cleaning or walking between the bedroom and the kitchen table.

You’re better off then, Wischek argues, having a tracking app on your phone, which can sit in your pocket at all times and record even those minor movements. Some such apps rely on the phone’s GPS to measure your physical activity and therefore drain the device’s battery quickly, but Fjuul relies only on the acceleromter, calculating energy based on motion. (Fjuul used Finland as its test market, but it is available in the US, too – but so far it uses only the metric system.)

Rather than tap into the zeitgeist for quantified-selfish data-overload, Wischek decided to make his app as stripped-back as it could possibly be. So, instead of delivering you complicated reports, Fjuul’s background color changes according to the intensity of your activity. If it’s green, you’re in a good spot and can feel happy about your energy levels, and if it’s orange you’re going above and beyond what is required of normal people so for God’s sake sit down and have a beer.

The app splits your activity into three categories – walking, moving, and running – and provides a breakdown of time spent doing each for each day. It also assigns you a certain number of Fjuul “points,” so you have a score to meet or beat each day. In the next version of the app, there’ll be social features so you can compete against friends.

By coincidence, another startup that thinks smartphones are the ultimate fitness devices is also based in Helsinki. Moves takes a more data-intensive approach to tracking exercise, proving maps of routes taken throughout the day, and breaking down your physical activity into time segments according to how much time in each day you spent running, walking, and biking. 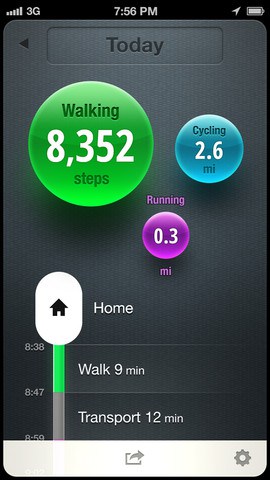 Karjalainen says that while dedicated devices such as the Fitbit and Fuelband are useful for hardcore exercise enthusiasts, they require too much effort and behavior change for casual uers. Part of the problem is that you always have to remember to charge, carry, and synch the devices. A smartphone, on the other hand, is with you most of the time.

One drawback of the Moves approach, however, is that it puts a heavy burden on the battery. Karjalainen claims that the company has pushed the average battery life to 14.5 hours for Moves users, but some people still feel as though the always-on app is too much of a drain. For those people, unobtrusive fitness-specific devices will continue to be preferable – at least until smartwatches hit the market.

Even though they are based in the same city, Fjuul and Moves don’t have much interaction with each other. They are, however, part of a fledgling Finnish ecosystem that seems to be building competency in wellness apps. Other fitness and wellness apps to emerge from the country recently include Suunto, SportsTracker, Omegawave, and  RecoApp.

The Finns already have a strong reputation for technology, especially in gaming, where Supercell (“Clash of Clans,” “Hey Day”) and Rovio (“Angry Birds”) dominate. Perhaps real-life exercise is the country’s next tech step.