The battle for the “second screen” is still being won by Google, Twitter, and Facebook. While the likes of GetGlue, Umami, and Miso have come out with unified search and social experiences for smart devices that complement TV watching, none has managed to come close to supplanting the giants.

That fact, however, hasn’t put off a startup of former Netflix and Google executives, who recently soft-launched a visual search iPad app called Portl. The app is an attempt to enhance the act of watching TV by providing a search experience tailored for mobile devices.

Portl doesn’t have a Google-like results page, and it presents all its content as image “cards” arranged in a grid. While you’re watching “Breaking Bad,” for instance, you can search for “Bryan Cranston” and you’ll be presented with a series of cards that link to his Wikipedia page, timely tweets from relevant people (hand-curated via Mechanical Turk), YouTube videos, and content from Instagram and Vimeo. The grid of images flows slowly, but you can speed it up by scrolling. One of its best features is that you can select a video from the stream and have it play in a corner of your screen while you browse through the other cards. 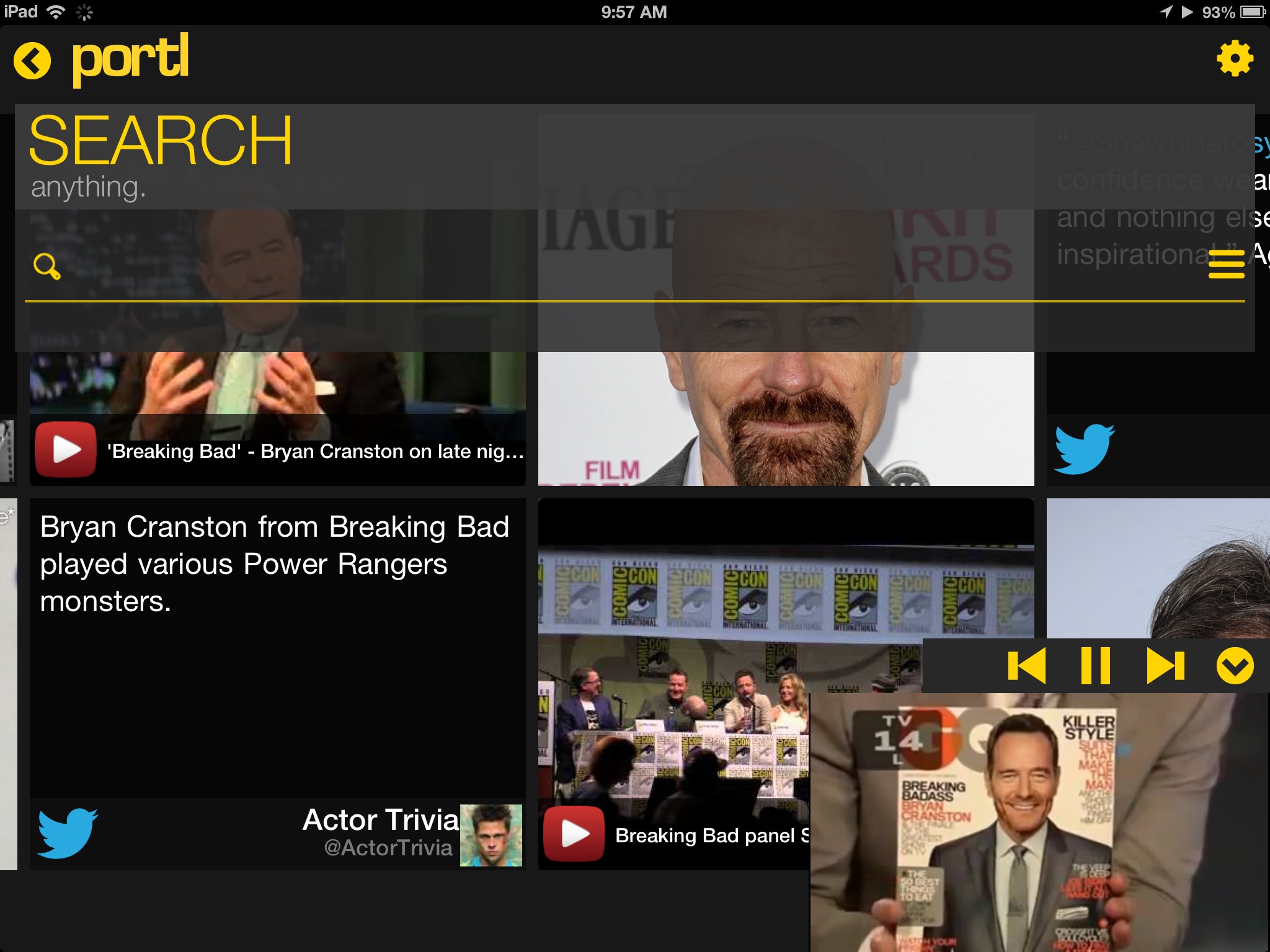 Portl allows you to play a video (see bottom right) while continuing to browse results.

Included in the results are also image links to download songs from iTunes, and in the future you’ll be able to buy tickets to concerts, get travel deals when you search for particular destinations, and so on. This “native advertising” will be Portl’s main revenue source.

Portl is the work of a four-person team based in San Francisco and led by CEO Thomas Purnell-Fisher, who was most recently head of product for YouTube’s TV division. Prior to YouTube, he was a product manager at Netflix, responsible for the service’s PlayStation 3 app. Former Google video streaming engineer Colleen Kelly Henry, who was most recently vice-president of engineering at TWiT, is also on the team. The founders and a couple of other investors have put about $250,000 into the company and will soon try to raise more seed money.

Based on research done while he was a Netflix, Purnell-Fisher believes that when people search for major topics – celebrities, destinations, news stories, and the likes – what you’re mostly looking for are images. Images, he says, “sell” content better than does text, because the data density in an image is much higher. (Insert cliche about 1,000 words.)

In a browser on a desktop computer, however, image-based search results don’t work so well, in part because scrolling is a more difficult and less enjoyable process than it is on a touchscreen. That might explain why visual search startup SearchMe failed, and why recent arrival Leap2 will have a difficult time making any headway against Google.

When it comes to tablets and smartphones, however, Purnell-Fisher thinks the rules change. Because you can scroll through lots of real estate really quickly with the tweak of a thumb, people don’t mind dedicating a lot of space to image results. But the key is that the page is touchable.

“The tactile experience of touching a grid of images is satisfying whether you’re two years old or 90 years old,” says Purnell-Fisher. “Presenting these images like they’re polished, beautiful stones that you want to put your hands on, I think it connects to something really basic about the human personality.”

He may be right, and Portl is a pleasure to use – at least once you get over the hassle of connecting all your social media accounts to it. But is it going to be enough to compel consumers to turn to the new app instead of sticking to what they know with Google and Twitter? That’s a difficult question to answer at this early stage of the app’s development, but the cases of GetGlue – which has been around since 2007 and has $24 million in funding but only 1.2 million users – and others suggest that the challenge for the small startup will be much greater than just producing a slick user experience.

And let’s not forget that Portl is stepping into difficult territory. Twitter is investing big in social TV, as evidenced by its acquisitions of Trendrr and Bluefin Labs, and Google is a seemingly unsurpassable giant in search, visual or otherwise. Grabbing even a slither of the spotlight while those two giants increasingly dedicate resources to dominating it is a task of stupendous proportions.