During the US Presidential election campaign last year, Outline was called Politify, and it was almost a side project for a group of UC Berkeley students. Politify was a visualization tool that showed the would-be effects of the two candidates’ policies according to your personal finances and where you live. At that point, it had won a $20,000 prize from Berkeley’s “Big Ideas” competition and a $15,000 prize from the Sunlight Foundation.

Then, the three-man team went through Tech Stars in Boston. In June, the startup, now called Outline, was named as one of eight winners of the Knight News Challenge on Open Gov. And now Outline has its first round of funding – $850,000 – and its first customer: the State of Massachusetts.

With a pivot, Outline’s main product has gone from a candidate comparison tool to public policy dashboard for governments, allowing them to get a sense for various outcomes of proposed policies. The new approach fits into a broader mission of providing tools that help formulate public policy and communicate its impact.

Outline is “the apparent successful bidder” in a procurement with Massachusetts, which, once the contract negotiations are finalized, will put the startup’s Budget Simulator in the hands of the state government. The simulator allows people to adjust variables – such as tax rates or healthcare spending – within a budget and see how the changes would affect them or their communities. It’s all based on millions of anonymized federal tax returns and Census records. 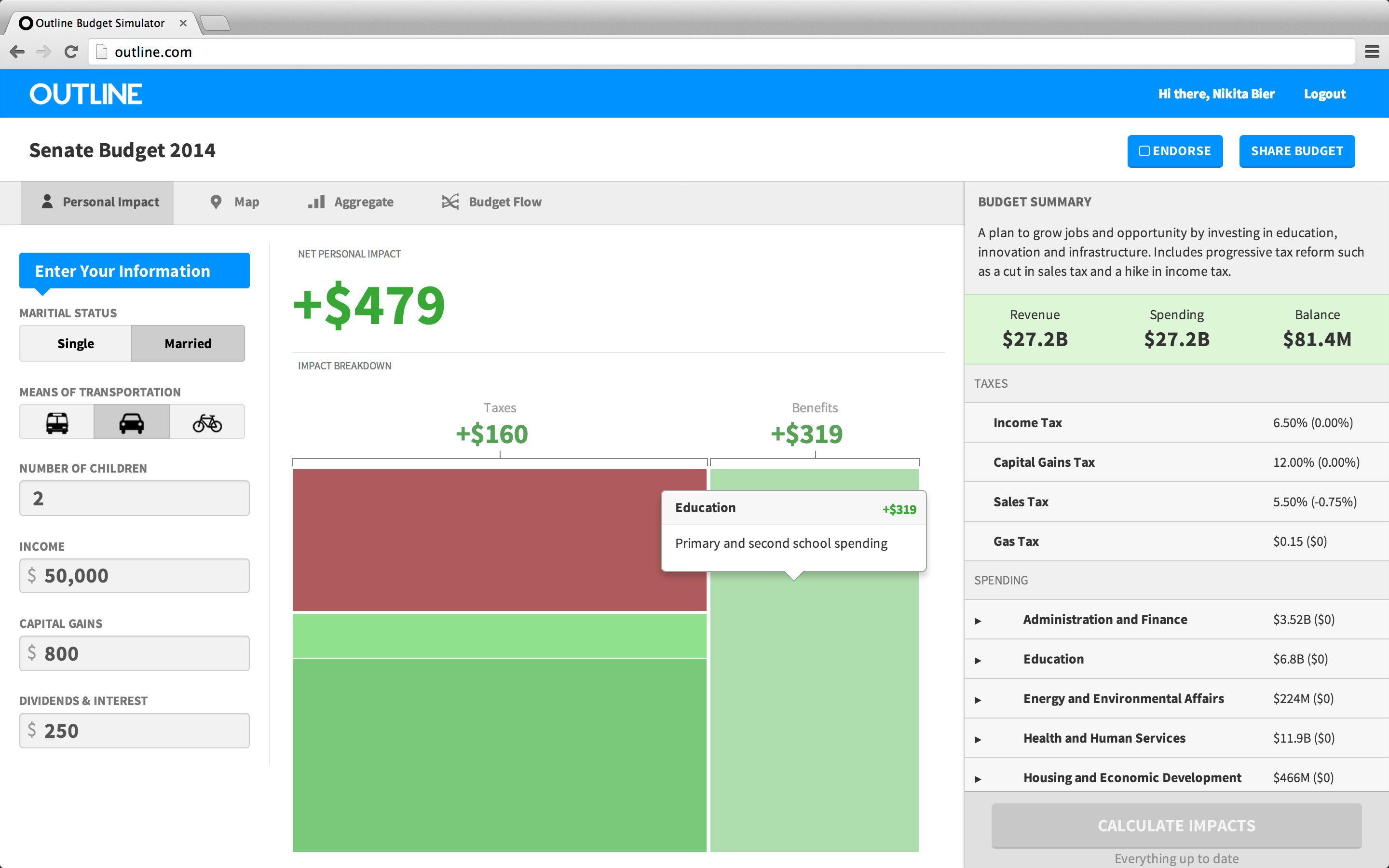 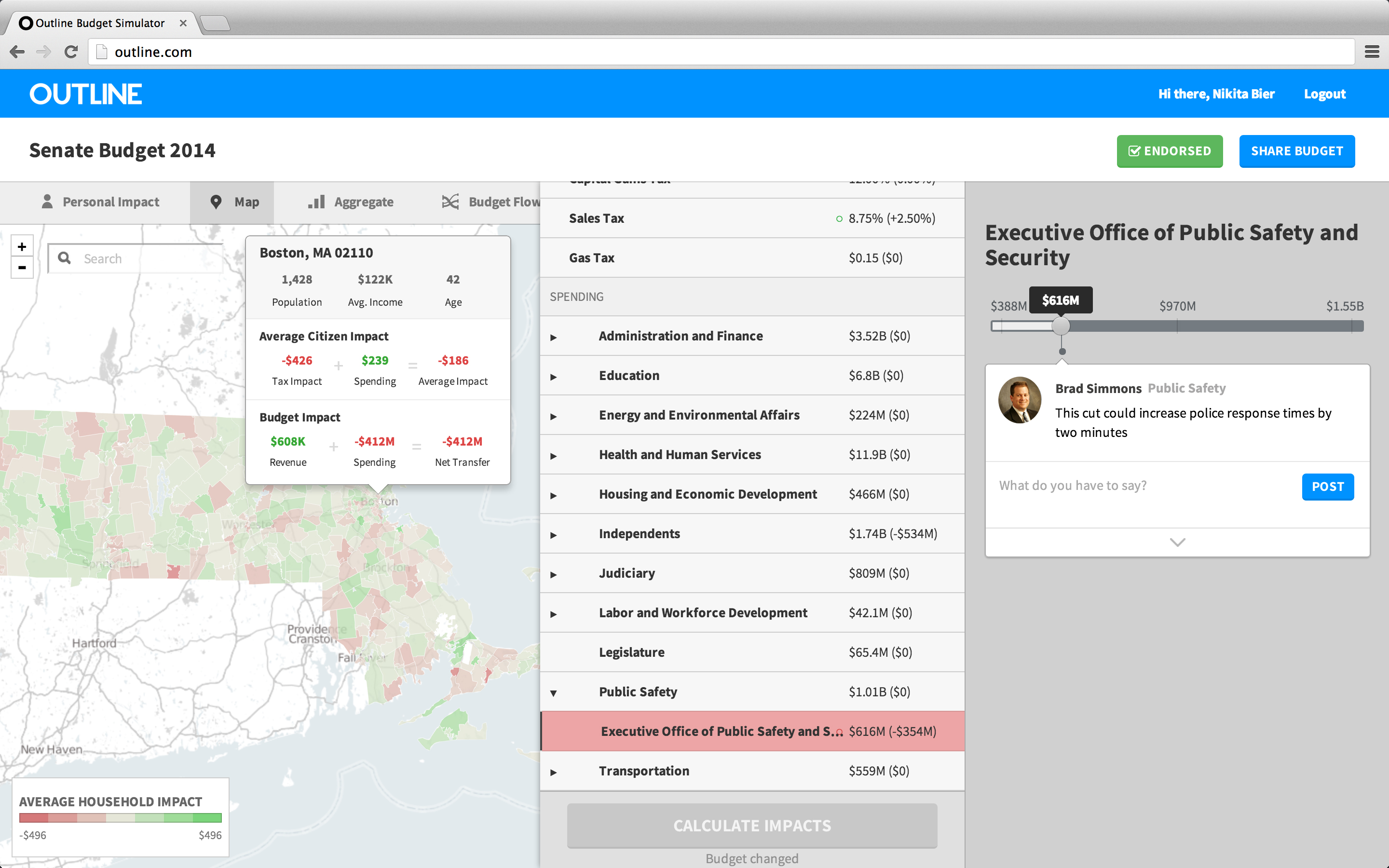 The key utility of the app, however, is in the public consultation factor. When someone “endorses” a particular policy via the simulator, the mark of approval can be seen by public officials, which helps their decision-making (at least in theory). Co-founder and CEO Nikita Bier calls this approach “aided representation,” in which the software determines a user’s interests and helps them advocate for those interests.

“The primary inspiration for this company was my interest in answering the question: ‘How does government impact well-being?’” says Bier. “We think, with software, that participation in government can be part of everyone's daily Internet experience.”

Bier says the biggest concern Outline faces from potential partners is how novel its technology feels. Despite various open government initiatives – including the White House’s Open Government Initiative – the political and governmental worlds, especially at the state level, are still getting used to the idea of communicating with voters over the Internet, let alone giving them the ability to provide granular policy feedback based on data visualizations. And of the initiatives that are out in the public, some, such as the Transfer Income Model, are not particularly user-friendly.

"We’re trying to let anyone, regardless of their background, be able to produce solutions to society's problems,” says Bier, “and to have that analysis be as rigorous as that of a trained economist.”

Outline’s seed round comes from the Knight Foundation Enterprise Fund (a result of the News Challenge award), prominent angel investor Esther Dyson, and First Round’s Dorm Room Fund, as well as a handful of angel investors from Boston. It’s going to use the money to hire designers and economists.

Outline is the latest company to join a growing class of startups focused on addressing governmental and political issues, including TurboVote (voter registration and choices), Seeds (a campaign volunteer platform), MindMixer (civic engagement), and PopVox (public feedback on legislation). As with those companies, Outline will face the many challenges that come with a small startup hoping to catch a piece of the budgets lorded over by slow-moving bureaucracies whose idea of innovation doesn’t stretch far beyond the BlackBerry.

Massachusetts is a good start, but that deal has been in the works for months. Moving beyond the state is going to be an even tougher slog for Outline.