Robots are replacing workers, right? Tech creates jobs for a few, but they come at the cost of jobs for the many, right? With the rise of automation, the labor market will inevitably contract. Right?

Not so right, says a new paper from the Information Technology & Innovation Foundation, a non-partisan tech policy think tank. In a report authored by Ben Miller and Robert D. Atkinson, the think tank says the suggestion that high-tech innovation will make the US's labor market woes worse is "completely wrong and not supported by data, scholarly evidence or logic."

The report, entitled "Are Robots Taking Our Jobs, Or Making Them?" argues that more technology benefits the overall economy and workers, and that it is crucial to the country's longterm competitiveness.

"Robots, automation, machines, productivity: these are key enablers of human progress and absolutely no threat to overall employment," say the report's authors.

In a hard-line assault on arguments variously put forward by Paul Krugman, MIT professors Erik Byrnsolfson and Andrew McAfee, and Richard Posner, among others, the ITIF argues that the latest bout of "neo-Ludditism" is a predictable reaction to ongoing employment problems, and that the phenomenon is a case of history repeating itself.

The anxiety about machines obliterating human jobs can be traced back to the 19th century, when people claimed the rise of machinery threatened the working class, the report says. Similar fears have arisen around the time of the New Deal, after World War II, and in the 1950s and 1960s, with the spread of "push-button" factories, the authors note. In each case, they argue, the concerns were misplaced.

"Despite the episodic worries about technology destroying jobs, in each of these periods the number of jobs always recovered and continued to grow." (See graph below.) 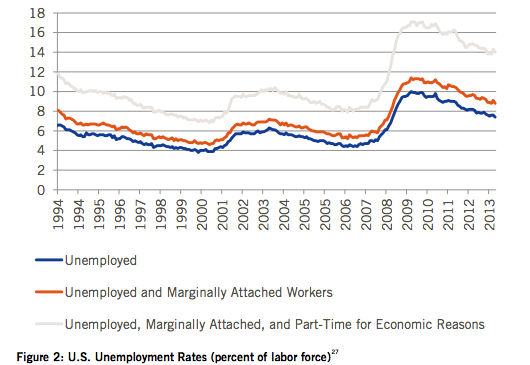 The increased productivity that happens as a result of technological innovation creates savings that flow back into the economy in the form of lower prices, higher wages, or higher profits, the authors say. The resulting economic activity in turn creates demand for other companies and services – restaurants, movie theaters, hotels, and the like – that respond by hiring more workers. 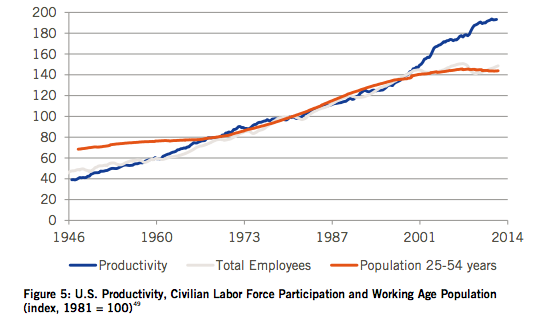 The ITIF's report reads as a paean to productivity, so you can be sure it will elicit some stern rebuttals. But the basic message is: Stop fretting about tech stealing your jobs. Even if the economy never again created a new industry or occupation, higher productivity levels would create cheaper goods and services as well as higher per-capita incomes. Those forces would in turn stoke consumer demand, which would necessitate more workers to satisfy that demand.