Former Facebook managing editor Daniel Fletcher and the two founders behind the Backspaces storytelling app have launched the beta version of a platform that aims to help independent journalists get paid for their work. Called Beacon, the new platform lets readers follow their favorite writers, and others who publish on the service, for a monthly fee.

Fletcher and cofounders Adrian Sanders and Dmitri Cherniak want Beacon to foster relationships between readers and writers on a one-to-one basis. Writers can promote their work via Beacon and encourage their followers to subscribe to the journalism available on the platform for $5 a month. (During the beta period, readers get a free 14-day trial period.) Most of the revenue – between 60 percent and 75 percent; the founders say the exact figure will be determined over time – goes directly to the writers.

Fletcher, who’s in charge of Beacon’s editorial operations, says the platform serves as an outlet for reporters to tell more stories, and also provides a new way of funding it. It launches today in beta with 29 writers on board, most of whom have had bylines in major publications, including Time magazine, the New York Times, the Times of London, and Vice. Some of the more recognizable names include Iona Craig, Joshua Foust, and Tristan McConnell. The roster has a bias towards freelance international correspondents.

Beacon’s founders see the platform as a venue for hosting the sorts of stories that are important but aren’t a perfect fit for traditional outlets that demand specific criteria and news pegs before agreeing to pay for certain content. For instance, Fletcher has enlisted the services of an Afghanistan-based reporter whose stories tend to make the mainstream press only when bombs go off. Beacon, which is in the process of fundraising, will be a place to host other Afghanistan-related stories that would be of interest to anyone who wants more than just war stories. Similarly, if you’re interested in reading stories about women in Vietnam, you can follow Jean Friedman-Rudovsky. If you’re more concerned about stories from the frontlines of international conflicts, then you can pay to support Carmen Gentile’s work. 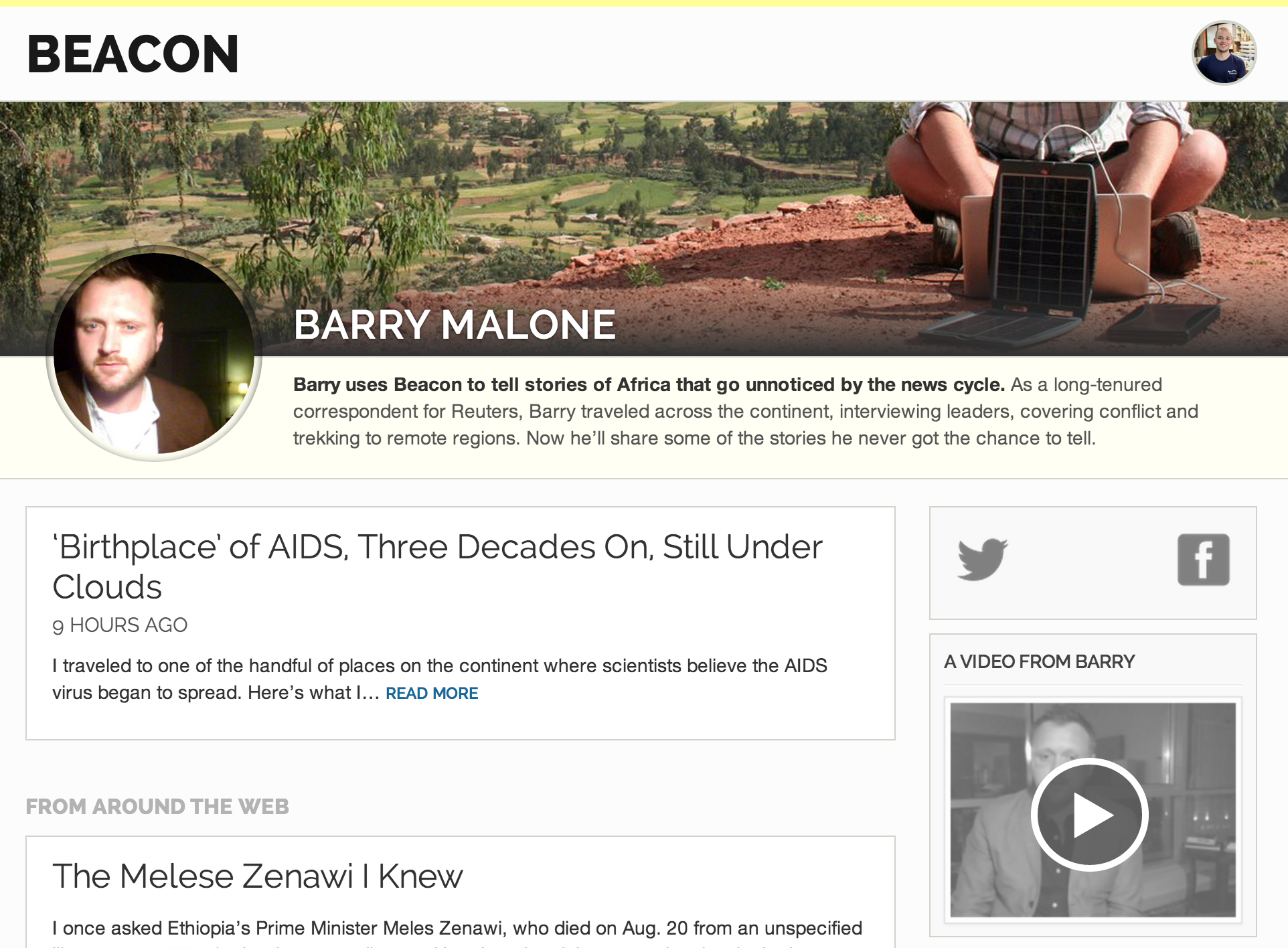 In the mode of modern media startups, Beacon’s design is clean, crisp, and blessed with generous helpings of white space. The story view, which is typically laid out with a large picture at the top of the page, looks a lot like Medium. It’s also responsive, so the layout adapts to the size of whatever screen it is being viewed on. When logged in, users can peruse writer profiles or see a news feed of the latest stories, with the most recent dispatch from their writer of choice pegged to the top of the page. Sample headlines from early Beacon stories:

While the list of writers for the beta version is selective, they each have open access to the platform. Beacon is taking a hands-off approach, which means the writers are responsible for their own editing and headlines. It’s also up to them how often they post to the site.

“We want them to submit stuff they think is valuable and is worth paying for,” says Sanders. “If people keep coming back for your stories, you get to keep telling them.” 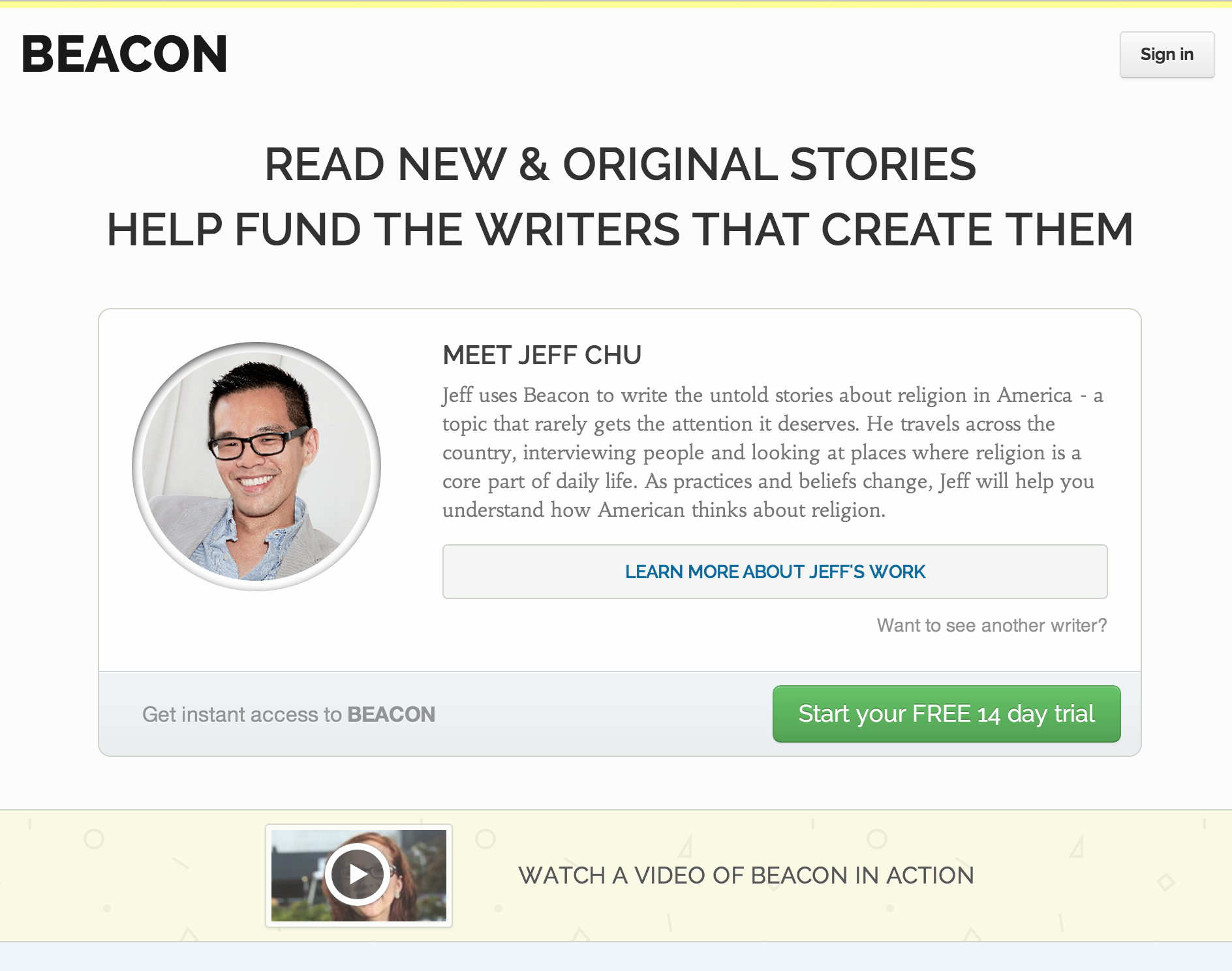 Fletcher, who before joining Facebook worked as a reporter for Time and social media director for Bloomberg, wants Beacon to help writers step out from behind their bylines to build relationships with readers beyond just cultivating a following on Twitter.

While it is a worthy mission, the difficulties Beacon will face are numerous. For a start, there’s that asking price, $5 a month, which is a good deal more expensive than Andrew Sullivan’s The Dish ($2 a month), NSFWCorp ($3), and The Magazine ($2), to name a few. Considering readers are hardly deprived of online reading options, getting people to pay $60 a year for yet more reading material will be a tall order. The free Medium, which is also fashioning itself as a platform, even though it also behaves like a publication, will be one major source of competition for attention spans.

It might also turn out that some of these reporters need their editors. By having direct access to the publishing platform, their raw copy will be exposed. For some reporters, that’s fine because they’ll be adequate self-editors. For others, it will result in substandard work that could degrade the overall reading experience on the platform.

In holding up first the most virtuous forms of journalism and asking readers to dig into their pockets, Beacon also runs the risk of positioning the reporters on its platform as charity cases, appealing to people to pay up for the good of journalism. Such an unintended effect might prove helpful in extracting a few dollars at first, but for longterm success Beacon needs to host content that people feel they simply must have access to.

International reporting, while vital, has never commanded a large audience and in the print era was always subsidized by more lucrative sections of magazines and newspapers, such as sports and business. Sanders says Beacon writers don’t need to command huge audiences to be able to make decent money from the service; they just need a few hundred really dedicated readers to support them.

Of all the models for new media, the platform is the most seductive. Platforms, which require demand significant investments on the technology side but fewer human resources, are more scalable and less hands-on than publications. They facilitate rather than generate content, so writers and producers effectively serve as the platform’s key product lines on an ongoing basis.

Platforms also offer the potential for the owner to make money in three different ways: from advertising that is attached to the easy traffic (although Beacon has no plans to carry ads); from consumers who, one way or another, pay for the product; and from people and groups who want to buy and sell goods or services through a marketplace hosted on the platform. In those senses, Beacon is of a kin with 29th Street Publishing and Tugboat Yards (which was founded by PandoDaily’s board chairman, Andrew Anker), both of which are also attempting to help independent journalists make money from their craft.

Still, no one media company has yet managed to get a platform just right. Media platforms tend to be either free-for-all affairs that attract lowest common denominator content and are prone to being manipulated by interest groups (BuzzFeed’s fits into that category), or partly moderated forums that blur the distinction between endorsed content and unsolicited contributions (Medium and Forbes’ contributors model fit into that category). Then you’ve got social networks such as Facebook and Tumblr that have tried to force their social platforms to also be venues for journalism, with disappointing results.

Beacon emerges from that tech-media milieu. With Backspaces, which has now been put on the backburner, Sanders eventually came to realize how difficult it is for the common user to tell a good story. At the same time, Fletcher was picking up on Facebook’s inability to masquerade as a publisher of journalism, which it doesn’t need to do because it already has a billion content providers.

Beacon, however, thinks there’s an opportunity for a well-controlled platform that attracts premium content. Says Sanders: “It just seems weird to me that there isn’t a platform play for quality."

So far, it hasn't been proven that such a thing can exist. Beacon, at least, is an interesting attempt to find out.