Last week, Walt Mossberg, Kara Swisher, and the rest of the AllThingsD team split with Dow Jones. Dow Jones, its parent company News Corp., and its premier media property Wall Street Journal will retain the AllThingsD name while the reporters will be free to sign with new media partners and/or investors.

But how valuable is the AllThingsD name without its star reporters? And what kind of journalists should News Corp. tap to replace them? As we noted last week, the social media following of Mossberg and Swisher far outweighs that of AllThingsD, which is in part a natural function or how we use Twitter today (follow the reporter, not the publisher).

What about overall brand strength? How many eyeballs and clicks will News Corp. lose when the ATD staff rides off into the sunset? These charts from content intelligence company Kontera, which measures what consumers are reading and hearing on social media sites and blogs, reveal just how important Mossberg, Swisher, and Kafka were to the Wall Street Journal.

Thanks to its reporters' cozy relationship with Apple executives, AllThingsD was an Apple scoop machine, and these reporting coups netted real traffic for News Corp. Around August 10, 2013, when AllThingsD broke the news about the iPhone 5S launch, the site held a share of up to 64 percent of AllThingsD and Wall Street Journal's combined telecommunications coverage.

Mossberg and Swisher vs other tech reporters

It's not as if Mossberg and Swisher are leaving behind an un-fillable void. Wall Street Journal has already brought on Slate writer and PandoDaily contributor Farhad Manjoo and may bring on more reporters and columnists in the coming months. So how does Swisher and Mossberg's draw stack up against other big tech reporters?

First off, here's how Mossberg and Swisher stack up against one another in terms of content consumption: 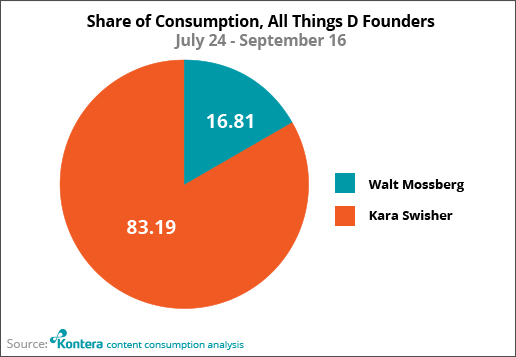 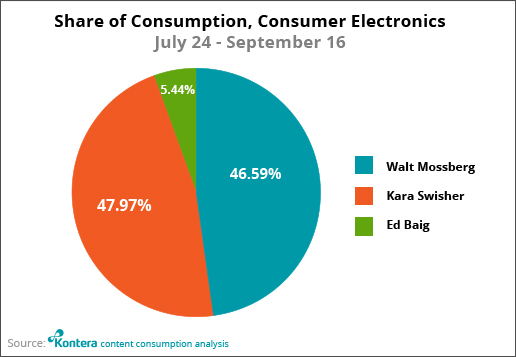 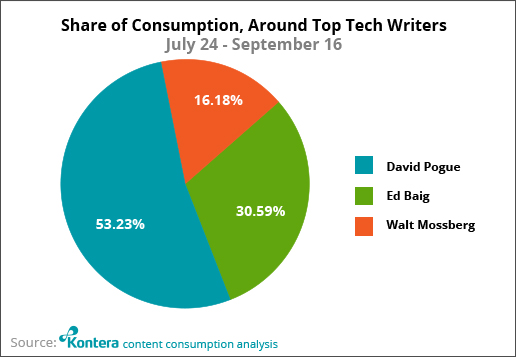 So what does all this mean? Basically that the brand strength AllThingsD brought to Dow Jones was centered to a large degree around scoops, and that its top reporters are in the same ballpark in terms of popularity as some of the biggest tech journalists around.

If Dow Jones wants to replace Swisher, Mossberg, and Kafka it will have to find journalists who not only have big followings, but also have valuable contacts within the consumer electronics and entertainment industry that drive big-time scoops.