Six years after it was founded and touted as one of the leading new Facebook apps, campaigns platform Causes is pivoting, repurposing itself as a standalone social network for social good in which people and brands can meet to raise money for things they care about.

Causes was once the great hope of the early apps built for the Facebook Platform, which, if you stretch your mind back to 2007, was originally envisaged as an app ecosystem that would serve as a welcoming host for third-party developers. As I've reported in depth, however, Facebook's platform didn't exactly live up to expectations. As the platform has declined in relevance, Causes has seen its significance go with it. While the app was able to tap Facebook's user base to sign up tens of millions of members – it claims to have helped 186 million people connect with a cause – it has struggled to keep those users engaged. This re-launch represents an effort to breathe new life back into the business. It also brings the company a new logo.

At the start of the year, Causes appointed Matt Mahan, formerly COO, as its new president three years after co-founder Joe Green – who now heads up FWD.us and had a short stint at NationBuilder before being forced out of the company – left the under-performing outfit. Causes' other co-founder, Sean Parker, has kept an arm's distance relationship with the company as he focuses on other things, like running Airtime into the ground and getting married in the Redwoods. Also earlier this year, Causes acquired political advocacy startup Votizen, giving it a stronger design team, led by former Mint designer Jason Putorti, and opening up an opportunity for a fresh strategic direction.

So what does the new direction look like? Well, certainly not a Facebook app. Instead, Causes today is a mobile-first social network with profiles for members, organizations, and campaigns, all of which are geared around the goals of raising money or signing up supporters for specific – fuck, there's no better way to say this – causes, whether it be enhancing child passenger safety, supporting military veterans, or fighting modern slavery. (See example pages below, but keep reading.) 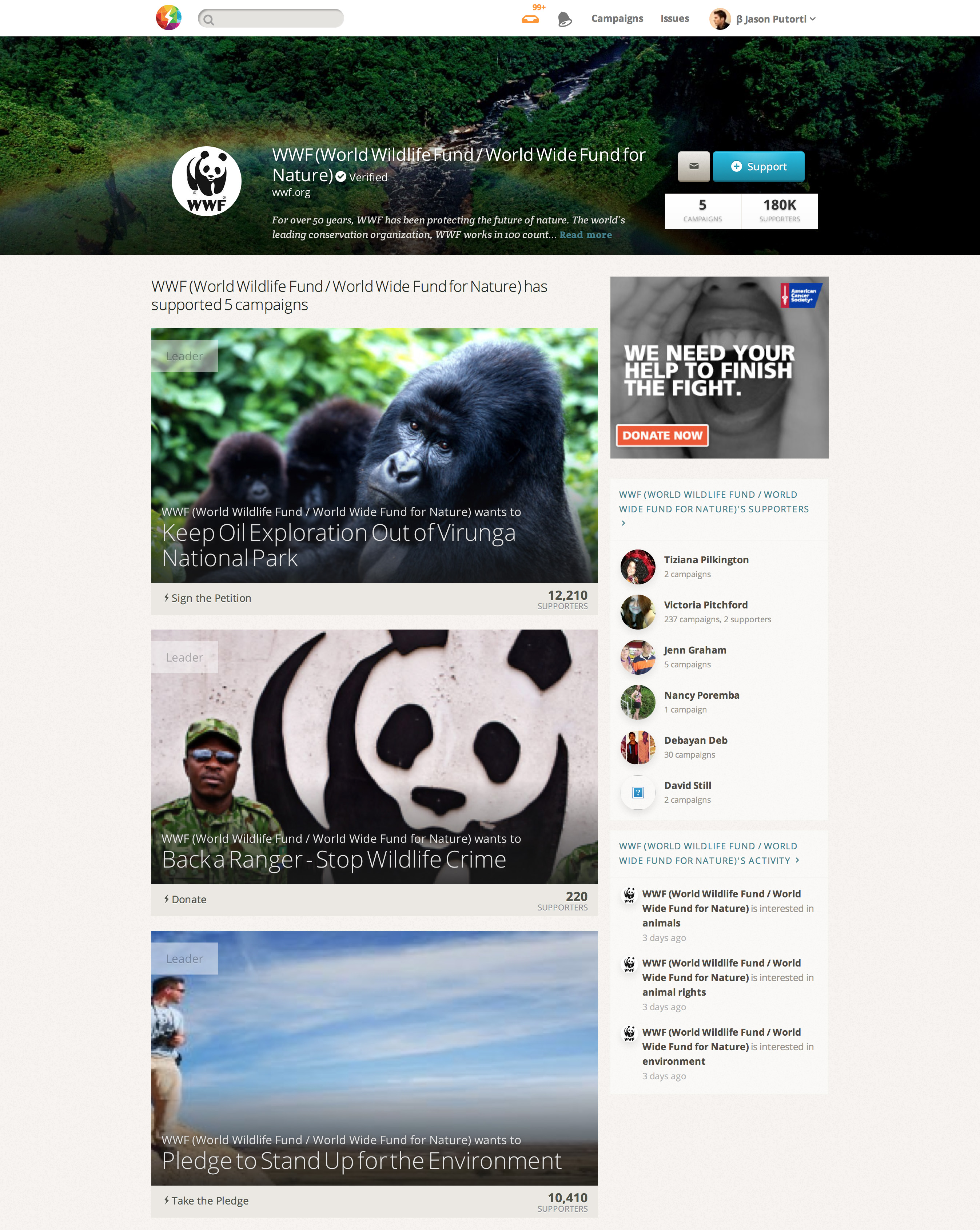 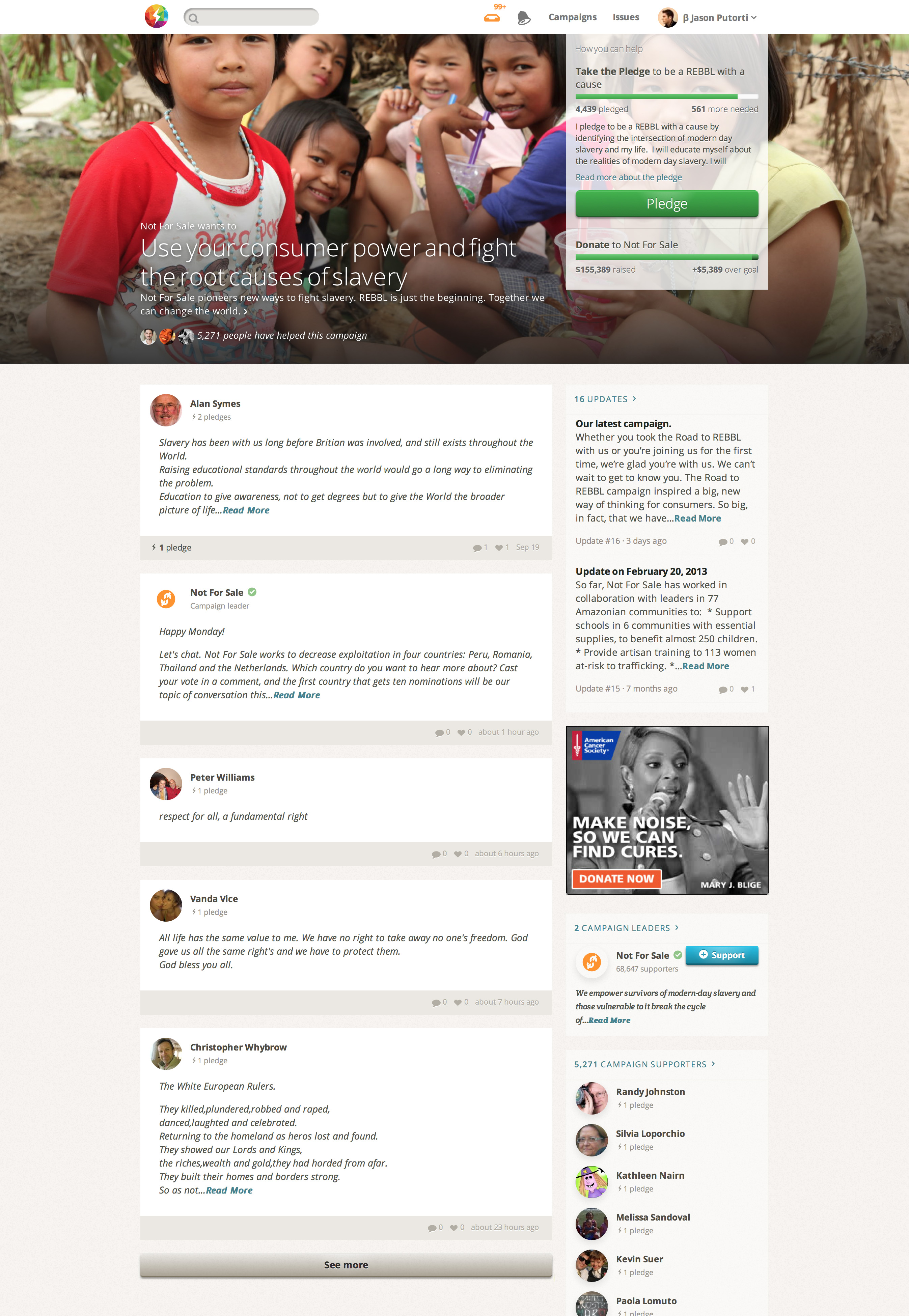 “There is no great consumer destination for civic identity and social good that’s really personal to you as an individual consumer and what you want to get done in the world," says president Mahan, explaining the new site's mission.

Of course, he's glossing over existing competition from the likes of NationBuilder, Good, which was recently busted doing the bidding of the US Air Force and appears to be struggling with its new platform, Rally.org, which lets people raise money for campaigns of various stripes, and Change.org, which takes a petition-based approach to trying to save the world. Causes might also look at Seeds, which grew out of the Obama campaign but is applicable to wider fundraising efforts, as a potential rival.

Mahan concedes that Causes has in the past been too transactional in nature, meaning that people tend to visit the site, sign up for the cause, and then disappear, never to be heard from again. But a Web business needs more user loyalty to survive. “When you’re an app on top of Facebook that’s simply building action-taking tools... it is inherently transactional,” Mahan says of Causes' early life.

It's not that the site wasn't sticky, he argues. It's that it was shallow – it was built around actions. He sees this re-launch as an opportunity to build out a supporter network that can be self-sustaining and self-feeding. “We’re making an entire shift in the category of company that we are."

The company is also looking for life beyond Facebook. While Causes will still be deeply integrated with Zuckerberg's social network, it won't rely on it. Mahan says part of the reason Causes never worked well on Facebook is that political content doesn't get a good response on the social network. People are there mainly to have conversations with their friends, and many react negatively when confronted with opinions about, say, Obamacare or Syria. “At the end of the day, I don’t think we could ever reached our mission by being solely a Facebook application," says Mahan.

The new Causes, then, is an attempt to carve out a special space for more civic-minded discussion. It will make money through brand-sponsored activity and campaigns on the platform, including brands who pledge to match fundraising drives dollar-for-dollar. For instance, you might see AT&T supporting a drive to raise money for wounded vets by pledging to make donations from the public.

The all-encompassing strategy for Causes is a smarter one than being a mere Facebook addendum that attracts fleeting users. But its road ahead will be just as uncertain as the past was rocky. In trying to establish itself as a social network in its own right, it risks venturing into marginal territory. Facebook, after all, is still the social kingpin. But as Sarah Lacy pointed out yesterday in arguing that "orthogonal" beats "niche," Causes might stand a chance if it can prove to the world that it offers something that Facebook has never been, and can't ever be, good at.

And hey, Facebook has shown repeatedly that it struggles to raise money from peer networks, let alone ones that are dedicated to the social good. So there may well be an opening for Causes, after all.