Amazon CEO Jeff Bezos has long said that Amazon doesn’t intend to make money by selling its e-readers or tablets to consumers. Better to sell these glorified sales catalogs on the cheap and recoup costs when people use them to shop at Amazon’s many online stores. It’s a proven tactic, as the many app developers and game-makers who offer their products for free and then make fortunes by offering in-app purchases can attest. The only difference is that Amazon offers everything from best-selling novels to television sets and views the entire world as a window through which customers — Bezos is careful to say “customers” instead of “consumers,” as if every shopper is already using Amazon — can shop its stores.

The original Kindle Fire was clearly a product of this thinking. It cost much less than the iPad but was also far less capable. Its software was buggy and shipped without basic features, such as an email client or calendar. The dedicated apps marketplace was barren compared to Apple’s App Store, and its hardware was unremarkable. If it weren’t for its low price and easy access to Amazon’s stores, the Kindle Fire would have been a flop.

Things improved with the Kindle Fire HD, a turbo-charged version of the original tablet that fixed many of its predecessor’s problems. The hardware was improved. The software was less buggy. Features like X-Ray — which allow users to learn more about the books, television shows, and films they access on the device — were introduced. Amazon couldn’t have built a better sales catalog. 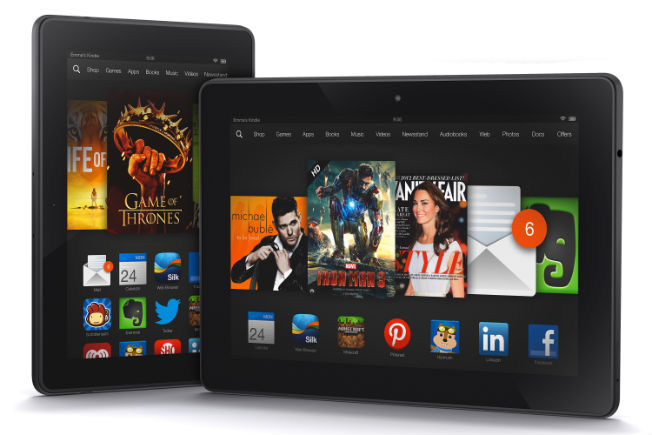 But it could make a better tablet, and that’s where the Kindle Fire HDX comes in. Announced in the dead of night, the Kindle Fire HDX promises even better hardware that offers twice the memory, three times the performance, and four times the gaming power of the Kindle Fire HD. The Kindle Fire HDX will ship with a sharper display than the iPad; a new feature that promises to improve contrast by changing the screen's lighting based on a user's surroundings; and a variety of other updates meant to help the product's battery last 17 hours on a single charge. Amazon has finally announced a device that could serve as a good tablet first and an excellent sales catalog second.

The hardware and software improvements might seem like they’re meant to entice the spec-obsessed early adopters who purchase devices simply because they offer more (theoretical) power, but I doubt that’s the main motivation. Amazon isn’t chasing the people who upgrade to the latest-and-greatest products every year, it’s trying to sink its claws into people who haven’t already bought into its ecosystem as much as it would like.

Mayday, a new feature that connects Kindle Fire HDX owners with Amazon employees, makes that clear. The service allows users to request help as they’re using their device — an Amazon employee is then able to see the user’s screen, provide instructions, and even draw on the user’s display from their cubicles hundreds or thousands of miles away.

Many early adopters wouldn’t use such a service. They know their devices inside and out. If there’s a problem, they search for a solution or tinker with the device until it’s fixed. They know how to download apps, purchase ebooks, and login to their email accounts. New owners might not know how to do those things, however, and Amazon is likely to use Mayday to make the Kindle Fire HDX more appealing to these beginners.

The Kindle Fire HDX is the obvious continuation of Amazon's attempt to build physical products that complement its digital stores. It's simply the first device that appeals to early adopters and beginners alike -- and the first Kindle Fire that seems unlikely to be abandoned for a better product as the tablet industry continues to grow.

"We're not trying to profit when we sell the device. We want to profit when people use the device better. We think that aligns us with the customer better," Bezos said in an interview with ABC News. He wants people to use Amazon's products instead of putting them in a shelf -- and he doesn't care if they upgrade every year. "I was on a beach and I saw someone using a 5-year-old Kindle reader, and I was delighted, We don't need our customers to be on the upgrade treadmill."

The Kindle Fire HDX is the first Amazon-built tablet that seems ready to be used for five years instead of being abandoned or replaced for a better product. People will still purchase the HDX mostly because it's cheap and Amazon's marketplaces are built directly into the device; it just happens that they'll be buying it because it's a compelling tablet, too. The glorified sales catalog has become something more.