Sick of relying on slow trucks and traditional delivery systems to get his company Zookal’s textbooks to people, Ahmed Haider decided on a fresh approach. Now, his Sydney, Australia-based company will deliver the textbooks via drones.

Today, Zookal, a textbook rental startup, is announcing that by using unmanned aerial vehicles to ferry textbooks to renters, it will cut delivery times from two to three days down to a matter of minutes, while shaving shipping costs down to a tenth of their normal prices.

The company owns two delivery drones and has put in an order for four more, all of which are big enough to carry the weight of a textbook and delivery it to a specific GPS point at an outdoor location, where the renter can collect the package at his or her convenience. (The company has put together a demo video to show how it works.)

The drones are autonomous, meaning they fly themselves to a pre-determined destination. Recipients can track the drones’ progress via a smartphone app, through which they’ll also receive notifications of deliveries. The drones carry no cameras, but they do come equipped with collision-avoidance technology in order to avoid trouble with trees, towers, birds, and high winds. Initially, the service is available only in Sydney, but the company plans to roll it out nationwide. 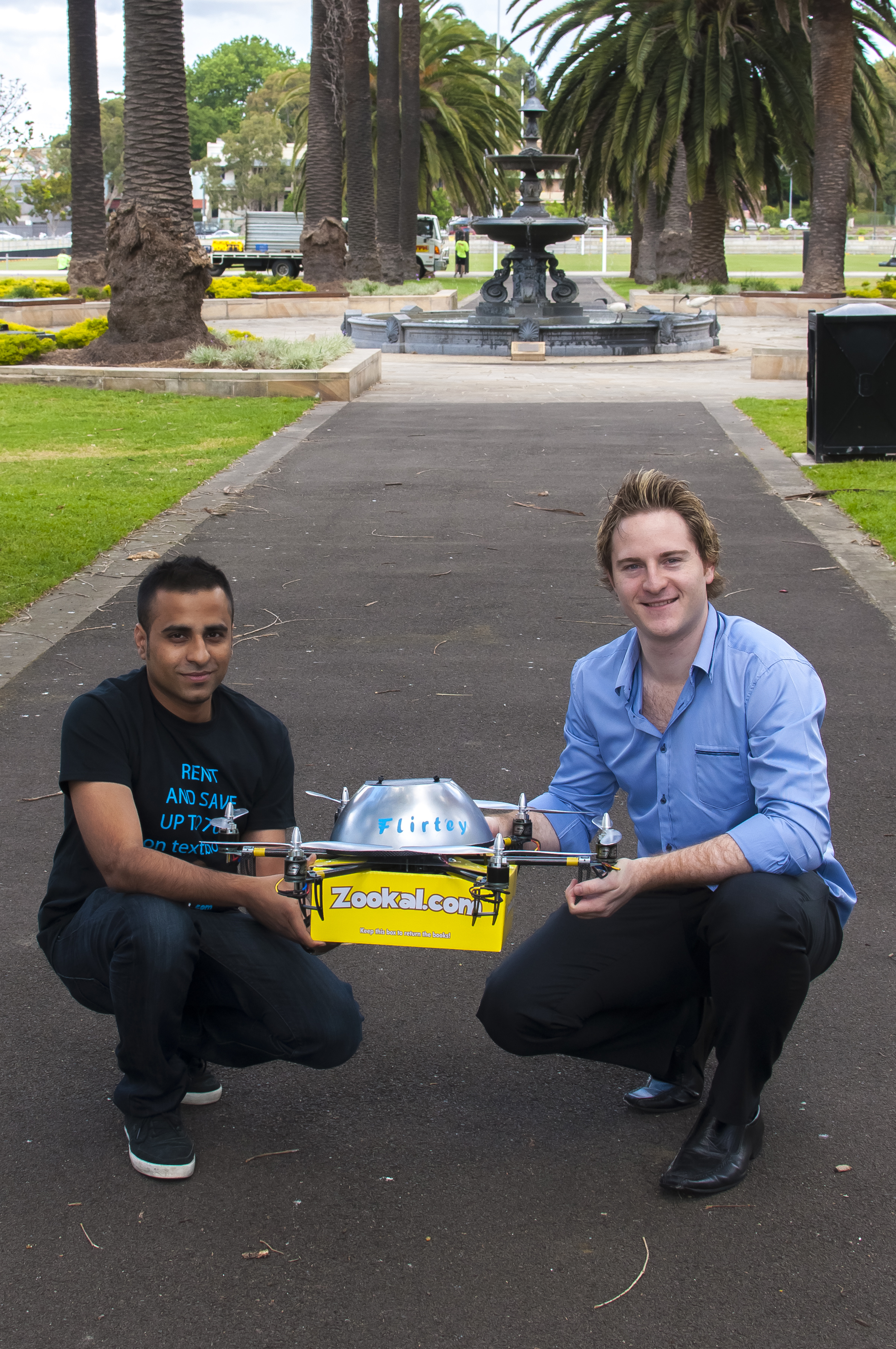 Zookal claims that its delivery service is the first commercial use of fully automated drones in the world. It might, however, face a competing claim from China, where drones have been spotted delivering packages in the southern city of Dongguan. The company in question, SF Express, said it has been testing the new delivery mechanism. In the US, various companies have done limited drone deliveries for promotional purposes.

In Australia, it’s legal to use drones for commercial purposes, but that’s not the case in the US, where the Federal Aviation Authority won’t release rules for commercial drones until 2015.

Zookal is relying on a UAV called Flirtey, which was developed at the University of Sydney. Zookal formed a joined venture with fellow startup Vimbra for the package deliveries. The new company is signing on other businesses as customers.

Despite the regulatory challenges in the US, Zookal founder and CEO Haider thinks it’s only a matter of time until drones like Flirtey fill the skies, forging new delivery routes and mechanisms. “I think this is going to be absolutely huge in terms of logistics,” he says.

The use of drones is not the first example of Zookal trying a non-traditional approach to solving a difficult problem. Earlier this year, we wrote about how the startup managed to raise a $1.2 million seed round from an investor in the US, starting only with a question on Quora.

At the very least, you have to give the company points for novelty.