China's betting big on HTML5 mobile apps. Will the US be next?

400 million users. More than 10 percent market share in 10 countries. Market leading positions in India and China. And UC Web, the leading mobile browser in China, is betting it all on HTML5.

Today, UC Web announced that Amazon is launching an app on its brower’s open platform, which acts like a de facto operating system. In UC Browser, users will be able to open the Amazon “light app” and shop on the site just as they would if they were using a native app, or visiting the website itself. While the retail giant is one of the first global brands to add an app to the platform, UC Web already has more than 1,800 app partners. 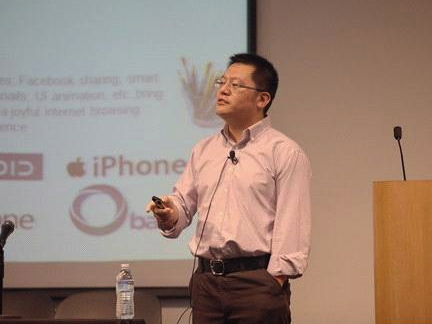 All the apps on the platform are built in HTML5 with the addition of a few plug-ins to help smooth out the user experience, said UC Web CEO Yu Yongfu (pictured at left), who is in San Francisco for the Global Mobile Internet Conference. The company believes that HTML5 is the best route for mobile apps, because it avoids the need for users to update apps; it skirts the app store approval process for developers; and the apps by their very nature work across platforms and devices.

UC Web’s belief in an HTML5 mobile app environment is similar to Baidu’s, which recently launched a similar app distribution platform. Baidu’s “Light App” platform allows users to search for, discover, and use mobile Web apps that they don’t even have installed on their devices. Even while Mark Zuckerberg has said Facebook’s biggest mistake of late was betting too much on HTML5, then, China’s biggest Internet companies are pushing consumers away from the native-app mindset. “In Asia, this has been an obvious trend,” said Yu.

Yu’s optimism for HTML5 isn’t total. He thinks HTML5 isn’t quite mature as a technology, which means at least for the next few years plug-ins will be required to ensure a highly responsive and slick user experience. However, he believes a HTML5-led approach is the future for the US market, too. Asia has led the world in mobile Internet usage behaviours, he noted, from the proliferation of SMS in Japan in the early 2000s to smartphones becoming the predominant entertainment device for consumers, who in Asia, thanks to its public transportation-led commuting culture, tend to have a lot more free time on their hands while on the move.

Meanwhile, UC Web continues to focus its international expansion on developing markets, particularly in India, where it is building up a large office and recently surpassed Opera to become the number one mobile browser in the country, according to StatCounter. It has opened an office in Silicon Valley, where it is taking a "softly, softly" approach to the US market. Instead, it sees opportunities for strategic investments in the US, much like China’s largest Internet company, Tencent, is investing in US startups. Yu said UC Web has already made two investments in companies outside of China, but he wouldn’t reveal which companies or even which country they were in.

He also brushed off suggestions that an IPO might be in its near future. Chinese Internet companies such as YY and LightInTheBox have seen some recent successes on the public markets in the US, and a host of Chinese companies that have been listed in the US for a while have seen a staggering surge in their stock prices. However, Yu said that the initial offering prices for Chinese companies recently listing in the US have been low. In order to command a higher initial offering price, he would like to see UC Web get to a larger scale before it ventures into the public markets.