Last month, Chinese handset maker Xiaomi leap-frogged Apple by announcing a 3D smart TV that retails for $490. Today, in an otherwise unremarkable appearance at the Global Mobile Internet Conference in San Francisco, Xiaomi co-founder and CEO Lei Jun revealed the reasons for moving so rapidly beyond the company's flagship smartphones and into the living room.

Xiaomi's rationale for manufacturing a smart TV can be boiled down to two points: it's another computer, and it's the ultimate smartphone accessory.

"Six or seven years ago, I started to believe that a cellphone is a computer and all you need is a terminal," Lei said through a translator in a response to a question from moderator Kara Swisher, co-executive editor of AllThingsD.

The two biggest weaknesses that a smartphone has as a computer are input and output, Lei said, because the keyboard and the screen are so small. He said he sees the TV as a large output device for a mobile phone.

"The second fundamental reason is that we believe a smart TV is a computer," Lei continued. "We are trying to manufacture the TV as a computer, similar to how, for our Xiaomi phone, we also tried to produce a computer."

Xiaomi, which is one of the world's most interesting tech companies, enjoys cult status in China, where its avid fans rush to snap up the startup's new phones as quickly as they're released through its online sales channels. Just last week, it sold out a batch of 100,000 of its Mi-3 phones in 83 seconds.

This year in particular has been an auspicious one for the company, which was recently privately valued at $10 billion and secured a marketing and recruiting coup by luring Android executive Hugo Barra to Beijing for a job as vice-president of global. While its sales numbers lag well behind Samsung and ZTE, in August it surpassed Apple's iPhone sales in China.

But Xiaomi's record isn't spotless. The company's set-top box business suffered a set-back last month when Xiaomi's Internet TV partner, Future TV, was forced to remove unauthorized movies from its service as part of a rebuke from Hollywood studios. HunanTV.com has also sued Xiaomi and Future TV for a content distribution infringement. 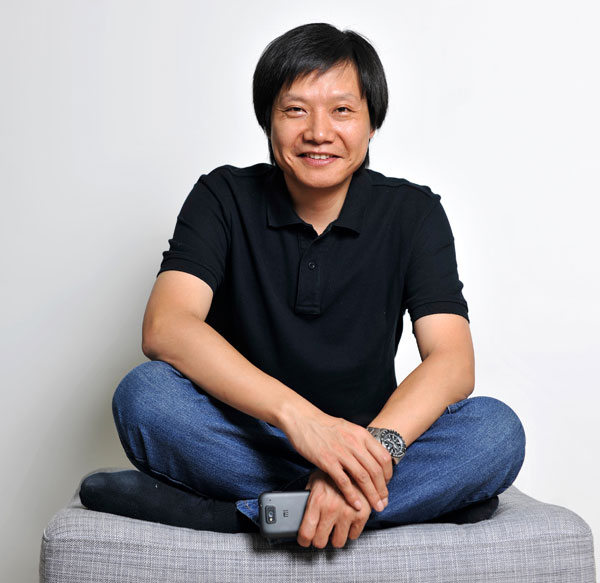 Meanwhile, Lei Jun has been getting defensive about the media's insistence on comparing him to Steve Jobs, a phenomenon that the entrepreneur initially encouraged by staging Apple-like product events and frequently appearing in front of audiences in uniform black T-shirt and jeans. However, last week he took to Xiaomi's blog to complain that the comparisons are unfounded.

"Mr. Jobs was a great man," Lei said, according to a translation by TechInAsia. "He did brilliant things, he changed the world, and was a huge inspiration to Xiaomi. But to use him as a point of comparison for myself is completely inappropriate. Xiaomi and Apple are two totally different companies."

Appearing on stage today in a drab grey suit, Lei took further pains to distance himself from Jobs, and Xiaomi from Apple. "The mission we're trying to accomplish is very different from what Apple's trying to achieve," he said. While Apple is selling high-end products and factors in a high margin for its device sales, Xiaomi sells high-spec phones at close to the price that it cost to manufacture them.

"I believe that we are more similar to Amazon," Lei later added, "because we are actually using the hardware to build a software platform."

Xiaomi's revenue model hinges on software services that it sells through its own app store. However, last year Xiaomi co-founder and president Lin Bin said the company was also seeing profitable margins of 10 to 15 percent on its hardware sales. At the time, Lin described Xiaomi's business model as like a hybrid of Apple (software and hardware integration), Amazon (low-margin hardware to support software sales), and Dell (online-only sales).