Design is important. You know that, Apple knows that, and anyone who has ever designed a cereal box knows that.

But new research shows that, when it comes to conusmer choice, design alone isn’t enough – it is context dependent. That means that if your fancy brand of red-box cereal is sitting on a supermarket shelf alongside 12 other brands of red-box cereal, the kerning of the font and the poppiness of the picture really doesn’t matter as much as what surrounds the actual product. If there happens to be a green box of cereal on the shelf next to yours and those 12 other red boxes, then that’s the one that’s going to stand out. Faced with those choices, a consumer is more likely to go for green.

In a study just published in the journal Proceedings of the National Academy of Science (PNAS), neuroscientists R. Blythe Towal, Milica Mormann, and Christof Koch show by way of a lot of complicated math that consumers make their choices based on a mix of value and visual impact. Two-thirds of the study’s subjects’ decisions were based on how much they liked a certain product, while one-third was based on how much a product popped out compared to others.

Here’s the complicated version, as explained by the researchers:

Our combined model quantitatively explains fixation patterns and choices with similar or better accuracy than previous models, suggesting that visual saliency has a smaller, but significant, influence than value and that saliency affects choices indirectly through perceptual decisions that modulate economic decision.

Basically, this xkcd comic nails it. 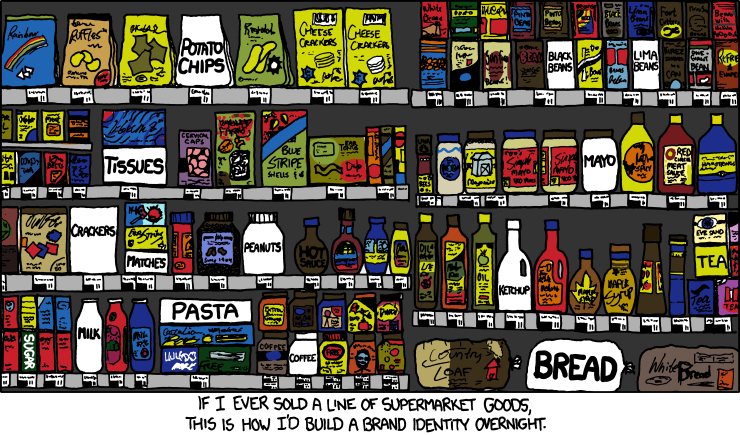 If you happen to be a Web or app designer, these findings might not seem that relevant at first glance. Your apps don’t sit on a shelf. But it does suggest that you should be thinking carefully about how to design an interfact in such a way that makes it easy for users to take the next step.

“It’s generally about optimizing interfaces for the human visual cortex,” says Fabian Stelzer, co-founder and CEO of Berlin-based startup EyeQuant, whose predictive software for tracking attention was used in the survey. (Mormann and Koch are on the company’s scientific advisory board.) If an element sticks out in comparison to other elements, there’s a higher probability of it being looked and clicked on.

“It’s about making information more accessible,” says Stelzer. “You as a designer have to have a very clear idea of visual hierarchy of things you want to communicated.”

Stelzer’s EyeQuant, which is backed by $640,000 in seed funding, is a 10-person operation, six of whom are neuroscientists. Its software predicts where people direct their attention on websites, but it’s also applying it to other, physical domains, such as retail outlets.

EyeQuant bases its online attention models on the analysis of loads and loads of eye-tracking data – “millions of fixations,” in its words – so it can predict with 85–92 percent accuracy what people are likely to look at it when they visit your website. It does lose its efficacy, however, if the site in question is very cluttered.

Stelzer says in the future EyeQuant envisages combining its software with more traditional market research to provide decent predictions of consumer choices in general. That’s all well and good – but this promising technology will become all the more useful to the world when it’s put to use for something other than just shopping and website optimization.