Mixpanel founder and CEO Suhail Doshi must have looked at SurveyMonkey’s $1.35 billion valuation at the start of this year and said to himself, “I want some of that.”

Today, 10 months on from SurveyMonkey’s $794 million funding round, Mixpanel, a mobile analytics startup, is releasing a competitive product that has been built for mobile – specifically, mobile apps.

Mixpanel’s new Surveys lets app owners create their own surveys for targeted delivery based on various criteria, such as age, usage habits, and relationship status. The surveys appear as transparent overlays within apps, as if they were just another feature, and send analytics data back to the creator in real time. 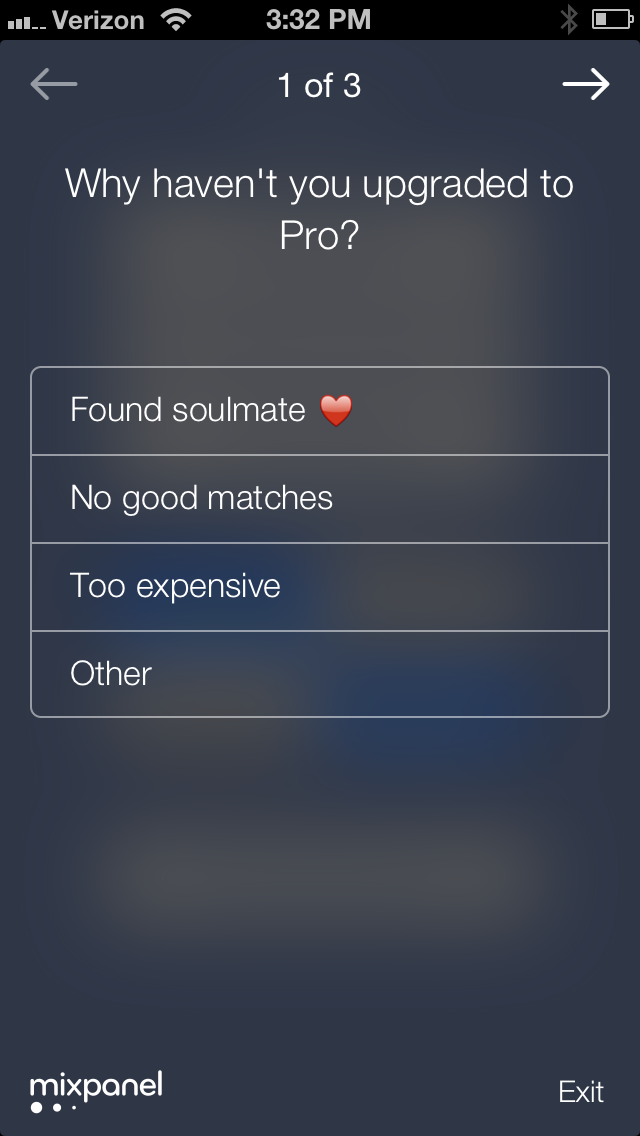 The new tool will compete against products already offered by SurveyMonkey, SurveySwipe, FluidSurveys, Automattic's PollDaddy, and SurveyAnyplace, as well as, more generally, Qualtrics, an enterprise survey company that in May raised $70 million from Sequoia Capital and Accel Partners.

Mixpanel, however, already has a good toe-hold with mobile app developers. Since its $10.25 million Series A round in May last year it has increased its revenue by 7X, Doshi claims, and at that time it was already making millions in revenues. The 35-person company now has 1,600 paying customers.

The company is offering the Surveys tool as part of its premium “People” product, which offers analytics on a granular level, allowing app owners to track an individual user’s behavior over time.

Doshi is not intimidated by the prospect of trying to take on another large vertical while still growing a nascent business that has until now focused on being “Omniture for mobile.” Now, he’s intent on building the “Google of data.”

“Our goal is to massively expand,” he says. “We think of any information, anything around the idea of data – that is our total addressable market.”

Surveys, says, Doshi, is one of the riskiest bets that Mixpanel has invested in to date, but that it could have large potential revenue pay-offs. Surveys have proven lucrative, as evidenced by SurveyMonkey, which has 360,000 paying subscribers and could go public if it wanted to. The big questions for Mixpanel are whether or not that market demand will extend to mobile apps, and whether or not its sideline product can stand up to the best that a heavily-funded giant like SurveyMonkey can muster.