State of censorship: How Iran censors the Internet (and how its citizens get around it)

In 2009, you couldn't talk about the Iranian elections and the ensuing protests without mentioning social media. "The Twitter Revolution," they called it. "The Medium of the Movement." The meme finally achieved the true distinction of "conventional wisdom" when Malcolm Gladwell felt compelled to dispute it.

But the problem with the narrative wasn't, as Charles Krauthammer put it, that "Twitter cannot stop a bullet." It's that at the time of the protests there were only up to 18,000 Iranians on Twitter, according to Collin Anderson, a researcher who studies Internet freedom in Iran. Most of the tweets that Westerners spread around originated in other countries, wrote Radio Free Europe's Golnaz Esfandiari at Foreign Policy. In fact, Anderson tells me that perhaps the biggest legacy of Twitter and the Green Movement is that after the protests the government began to associate social media with anti-state sentiment more than ever.

"Iranians are a technologically savvy population. They're connected, not necessarily for political purposes, but because they want to talk to their family and friends."

Now Iran's relationship with social media is popping up in the news all over again. Back in September, Iranian President Hassan Rouhani made a huge splash on social media, revealing to the world on Twitter that he had shared a phone call with Barack Obama, the first direct communication between an Iranian president and an American president since 1979. And just last week, Iran's Culture and Islamic Guidance Minister, Ali Jannati, said the government should lift its ban on social media.

Are these signs that the country is starting to soften its efforts to censor social media?

Although the state still associates social media with the Green Movement and other anti-regime elements, Anderson says it's begun to realize that, like in other countries, social media is not always or even primarily used to spark political upheaval. "Iranians are a technologically savvy population," Anderson says. "They're connected, not necessarily for political purposes, but because they want to talk to their family and friends."

Furthermore, Anderson says that according to the Iranian chief of police, 28 to 30 percent of the country's population uses circumvention tools, like Virtual Private Networks and proxies, to get on social media, making the ban difficult to enforce. "What you see with Rouhani on Twitter and Facebook is a tacit acknowledgement that Iranians are on these things. Even Parliament members, who say Facebook is a Zionist tool, also say it isn't their place to make such assessments."

But although Iran has perhaps taken a more realistic approach to social media, when it comes to sexual materials or anti-state, anti-Islam content, censorship is still alive and well.

What Wikipedia tells us about Iranian censorship

To paint a broad picture of Iranian censorship, Anderson and his colleague Nima Nazeri looked to the Persian-language Wikipedia, in a new study sponsored by the University of Pennsylvania's Annenberg School of Communication. "Censorship of Persian Wikipedia is, in effect, a microcosm of Iran’s broader censorship regime," the study notes, explaining that the way Wikipedia's open approach contrasts with Iran's closed society provides a good experimental framework for sussing out censorship.

So which of the site's 317,000 Persian language articles are blocked?

Iran censors Wikipedia in two ways: Blocking URLs and blocking keywords. The study identified 963 blocked article pages, almost half of which were related to civil and political issues and out of which 15 were among the 100 most-visited Persian-language Wikipedia pages, including entries about homosexuality, orgasms, and activist rapper Shahin Najafi. The government also blocked pages related to sex, religion, human rights, and the arts, including articles about the Baha’i faith and a biography of actress Emma Watson, who played Hermione Granger in the "Harry Potter" movies. 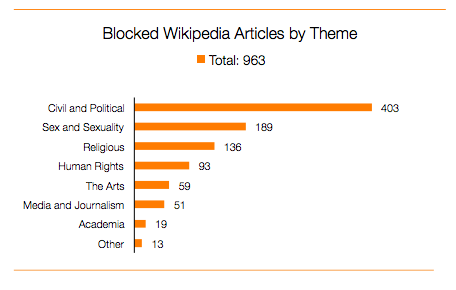 Out of those 403 "Civil and Political" articles, the most common blocked sub-topic was the 2009 elections and the Green Movement: 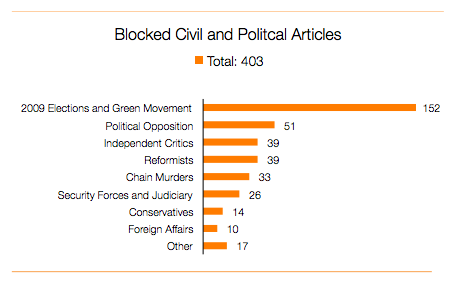 And here are the 189 blocked "Sex and Sexuality" articles broken down by topic: 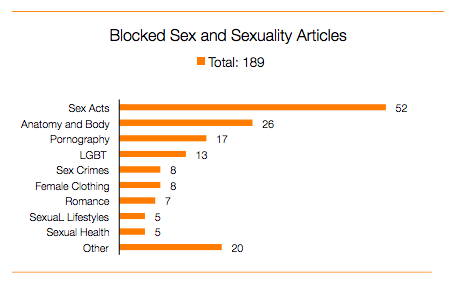 In addition to blocking URLs, the government also blocks keywords. This is problematic not only for obvious reasons (blocking keywords related to sexual health is a questionable use of government resources). but also because uncontroversial topics that may be spelled similarly get caught up in the keyword scrub. "For example," the study notes, "articles on the Atoll Bikini coral reef in the Marshall Islands and on the chemical compound stearalkonium chloride appear to be blocked because they coincidentally contained filtered character patterns in their URLs that match sex-related terms."

Here is a list of blocked sexual or anatomical keywords: 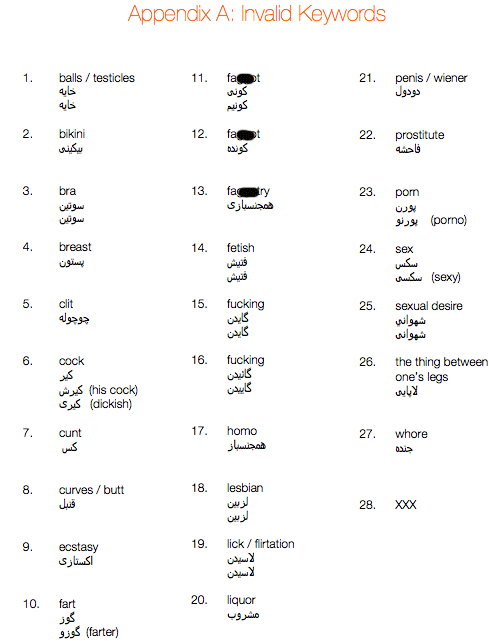 But with widespread avoidance and relatively easy access to circumvention tools, how serious a problem is Iranian censorship?

Although blocked keywords and blocked URLs comprise a big part of the government's anti-censorship strategy, Anderson adds that there are plenty of other policies that tacitly limit Internet access. "In 2006, (the government) mandated a bandwidth count unless someone provided documentation that the Internet is useful for professional purposes." This decree limited bandwidth for "non-professional" users to a 128 kilobits per second Internet speed. By contrast, the basic Internet speed provided by most cable providers in the US is around 3 megabits per second, or over 23 times as fast. The day Iran's Guardian Council released its list of official candidates for the 2013 presidential election, Anderson said the government artificially throttled the Internet speed down to 70 percent until the day after the election.

In addition, the need for circumvention tools, plus the burden to prove a "professional need" for faster Internet, creates digital divides between rich and poor, and urban and rural populations. If you have access to a fancy office or a university, chances are your Internet is going to be much faster than the average citizen.

"They aren't on death row for the explicit crime [of providing illegal Internet access]. But you get charged with things like violating national security or running an anti-God Facebook group."

And finally, although a 28 to 30 percent avoidance rate makes it impossible to widely enforce Internet bans, there are still people whose Internet activity puts them in the crosshair of the government. "Using (circumvention tools) is kind of okay," Anderson says, "but providing them? Not so much," adding that there are "countless" names sitting in political prisons who were found selling or providing illegal Internet access. There are even some on death row.

"They aren't on death row for the explicit crime [of providing illegal Internet access]. But you get charged with things like violating national security or running an anti-God Facebook group."

To read the full study, click here. Or if you prefer your info displayed colorfully and vertically, here's an infographic that rounds up the findings: