Harper's Magazine, a literary publication so old-school that it offers links to microfiche for stories it publishes online, is today launching an iOS app edition of its monthly magazine.

The app retains the look and feel of the print version of the magazine, but the layout has been adapted to the smartphone and tablet experiences, so there is only one column of text per screen and you scroll through an article rather than click through pages. As of today, the app is available only on iOS, but Android is coming soon.

Harper's is sticking steadfastly to its paid strategy. The app is available to paying subscribers, and to people who wish to purchase individual issues "off the shelf" via Apple Newsstand. Only a "preview" issue is available for free. Each of the first two editions cost $5.99.

That approach is a carry-over of its Web strategy, according to which only a few articles are available on Harpers.org for free. However, subscribers to the website have unlimited access to the Harper's back catalogue, an archive that stretches back to the 1850s. Only two back issues are so far available in the iOS app.

The app is published by New York-based 29th Street Publishing, which is just over a year old. The company focuses on helping independent publishers reach a dedicated audience of subscribers with paid apps. Its other titles include The Awl's Weekend Companion, Serious Eats Magazine, and poetry journal Little Star. 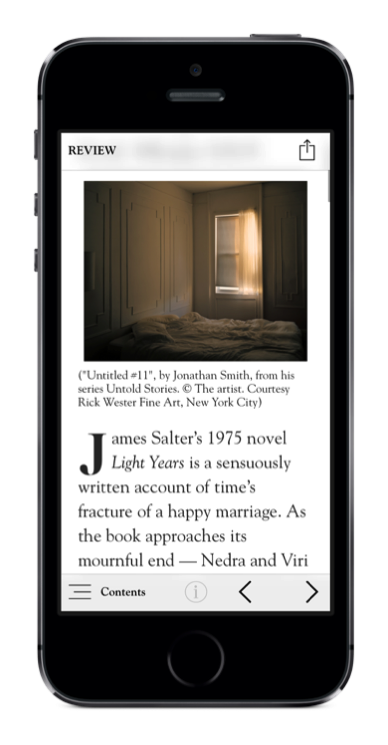 This is the also the first of 29th Street's apps that the Alliance of Audited Media considers a "replica," which means that app subscriptions and sales will count towards Harper's distribution numbers.

Harper's released an iPad version of its magazine in 2010, but that was a PDF replica of the print product. The new app retains the Harper's font and design aesthetic and is more friendly to a touchscreen experience. The overall product, however, still feels like a print magazine that has been adapted for a digital format, rather than a digital-native publication. The app cover, for instance, is just a replication of the print version, with text that is unreadable when viewed as an icon on the Newsstand.

The print-oriented format is perhaps not a surprise given that publisher John R. MacArthur has in the past railed against "Internet con men" who are ravaging publishing.

"Only ideological radicals like those at The Guardian, in England, openly tout the end of print," MacArthur wrote in the Providence Journal, "this while they continue to lose millions of pounds every year on their huge online overhead and free-content model."