Dan Fletcher has built a home for journalism outside of Facebook... where it belongs

Dan Fletcher’s career seems to progress in increments of 15 months. That’s how long it took him to land a cover story for Time magazine, at 22 years old and in his first full-time job. It was a story about Facebook as the social network passed 500 million users.

Within 15 months of that time, he found himself in Menlo Park, as Facebook’s new managing editor. It didn’t work out. Facebook didn’t need journalists, he found, and his editor role had actually turned into a brand marketing position. The experiment, like Tumblr’s dalliance with journalism, failed.

So, after 15 months with Facebook, he moved on. Now 25, Fletcher is the co-founder and COO of Beacon, a young news startup that asks readers to subscribe to individual writers for $5 a month. The writers collect on average 60 percent of the revenue from their subscribers, and for the price of entry readers also get to access the rest of the content on the site.

Beacon launched in September and so far Fletcher and his cofounders, Adrian Sanders and Dmitri Cherniak, have been encouraged by what they’ve seen. The model is working in principle, they say. Each writer on the platform – there are now about 50 – has at least one subscriber, and the top writers have close to 100. Those are very small numbers, but these are very early days. The journalists in Beacon’s first batch skew towards foreign correspondents, covering everything from conflict in Yemen, regional instability in Israel-Palestine, and the Khmer Rouge tribunal. The content on the site hardly appeals to a mass market.

But that’s kind of the point. Beacon is supposed to stand separate from the pageview-driven economics of most other online media. The idea is to cultivate dedicated audiences around particular writers, to shoot for depth of understanding, awareness, and engagement, rather than just a passing familiarity. This is a model designed to help those reporters toiling away on difficult subjects in difficult parts of the world whose work can’t be listicled or sold to a brand. If a writer can get to 1,000 subscribers, that represents $3,o00 a month – not enough to buy a Maserati, but more than enough to cover rent.

Of course, it might fail. It very well might fail. This is just the sort of reporting that for centuries has struggled to find a business model that didn’t involve a sports section or real estate ads. But Fletcher, inspired by a stint as social media director for Bloomberg, where he met reporters in various parts of the world doing just this sort of work, is intent on helping pay reporters for quality content outside the traditional means of compensation.

“If scale is the only thing that matters in journalism, then I think we’re in a bad place,” says Fletcher. “Beacon at least is an opportunity for a compelling counter model to that.”

Beacon has already proved its dedication to its writers, all of whom are freelancers who also write for other publications, by launching a feature called “Pay Me Please.” Inspired by Yemen-based Beacon writer Iona Craig, “Pay Me Please” is a forum on which journalists can name and shame the outlets that owe them money for work. The forum lists the outlet name, how much is owed, and how many days the payment is overdue. 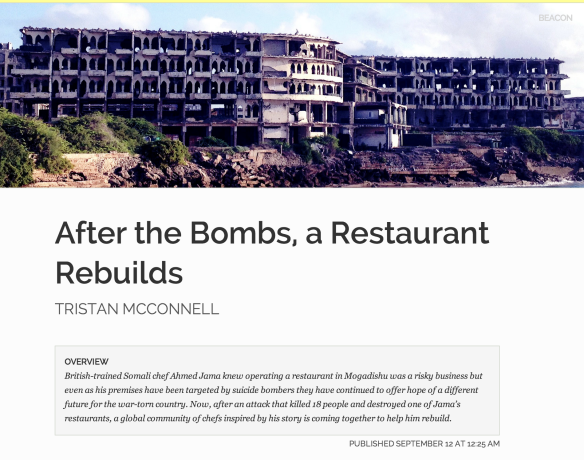 “If there are any things we can do that are useful to writers and help writers feel we’re on their side, I definitely want to build those things,” says Fletcher.

Despite his journalism background, Fletcher is taking a hands-off role at Beacon when it comes to editorial. He spends a lot of time recruiting writers to the platform, which is slowly adding science journalists and is looking into sports and cartoonists for future areas of expansion, but he doesn’t touch the copy that Beacon’s writers publish.

“If I learned one thing from Facebook, honestly, it’s that I’m not ready to be editorial director of anything,” he says. “I’m not a good editor.”

But he was clearly an adept young journalist before jumping the fence into the startup world. After growing up in Golden, Colorado, he followed his high-school girlfriend to Chicago’s Northwestern University to study journalism. The two had been co-editors on their high-school newspaper. They broke up midway through their studies, but Fletcher soon discovered that he really liked journalism.

For his senior-year internship, he was posted to Time magazine, where he took on social media duties. Under the leadership of Time.com managing editor Josh Tyrangiel, who’s now editor of Bloomberg Businessweek, Fletcher established Time’s Facebook and Twitter presences and ran the accounts without any supervision. He even continued the job when he returned for his final term at Northwestern, sitting in the back of the classroom with his headphones on, tweeting for Time while his classmates listened to a lecture about... social media.

“I remember coming back from the bars and tweeting with Michael J. Fox’s son,” he says of one exchange he had as Time’s Twitter avatar.

Time hired him straight out of college, and Fletcher went on to write several pieces for the magazine and the website, with a specialty in tech media. He wrote stories on YouTube video stars, Facebook Gifts (which included an attempt to send a ham to Taylor Swift), and, of course, the cover story that gave him his break. He interviewed Mark Zuckerberg and Facebook COO Sheryl Sandberg for the story, and then spent a week worrying that it might be spiked in favor of late-breaking news.

“I was sitting there all week with my fingers crossed hoping that no news would happen so the story could run,” he recalls.

The cover story was his last piece to be published in print. Soon after, Tyrangiel brought Fletcher over to Bloomberg, where his job was to travel the world and convince the organization’s reporters that they needed to be on Twitter and Facebook. It was a good job with great perks – first-class air travel, black cars to the airport, a free cafeteria – but then Fletcher got a call from Facebook and offer to move to California. The job description was vague, but it came with the title “managing editor.” The prospect of writing for an audience of 1 billion people proved too tempting, even though friends warned him that would never happen.

They turned out to be right. After about three months overseeing Facebook Stories, an awkward PR exercise that few people pay any attention to, it was clear to Fletcher that he wasn’t going to be doing serious journalism at Facebook. “Content’s never going to be core to their business model – at least, reported content,” he says, looking back.

“Technology companies aren’t ever going into the business of creating editorial. That doesn’t make sense.”

Leading up to his departure from Facebook, he gave a speech to the Edward R. Murrow College of Communication at Washington State University. Facebook doesn’t need reporters, he told the audience, because it already has a billion content providers.

“You guys are the reporters,” said Fletcher, according to PBS MediaShift. “There is no more engaging content Facebook could produce than you talking to your family and friends.”

That Facebook experience has informed the way Fletcher sees Beacon. Unlike Medium and BuzzFeed, which muddle the distinction between publication and platform, Beacon is purely a technology platform, Fletcher says. It is a venue and a tool for writers to reach their audiences.

He’s in no rush to make Beacon a blockbuster. The company, which is weighing up funding options, has enough capital to keep experimenting for at least a year. And he remains optimistic for the future of journalism in spite of the many challenges the media industry faces. That’s one of the reasons why his co-founder, Adrian Sanders, who was behind the Backspaces storytelling app, approached Fletcher about the idea of cooperating on a startup.

“The world of publishing and journalism is pretty brutal,” says Sanders. “It’s easy to become cynical and jaded and defeated because so much stuff has been tried. What’s interesting to me about Dan is he’s very smart, he has a lot of vision in terms of what has gone on in the last few years, but he’s not defeated by that. He’s actually driven to solve the problem.”

As for the future of Beacon, Fletcher is happy that the site still has a low profile. “There’s an opportunity to be really sneaky with this,” he says, “find out if it works, and then dump gasoline on the fire.”

Let’s see where it’s at in another 15 months.