Is MomentCam the next Chinese app to go big in the West?

Few Chinese apps have managed to get any serious pick-up in the West. The most serious contender so far is Tencent's WeChat, a messaging app that the company now claims has more than 100 million registered accounts outside of China.

But MomentCam, a new photosharing app with a twist, is burning up the iOS and Google Play charts not only in its homeland, but also in Southeast Asia, Australia, and Scandinavia. According to AppAnnie, MomentCam has reached No. 1 among free apps in the App Store in 18 countries, and has been No. 1 among photo apps on Google Play in 11 countries. In China, it saw a peak of 54,000 daily downloads through Wandoujia, one of the leading Android app stores in the country. (China has many Android app stores.)

Much of that apparent success came before the app even had an English-language version, which was released by its creator, Hightalk Software, just over a week ago. Jon Russell and Kaylene Hong over at The Next Web, however, suspect that MomentCam's impressive numbers might be due to a bit of app store trickery. Certainly, for an app to come from nowhere and hit number one overall in the App Store in 18 countries seems a little suspicious.

Regardless, MomentCam is pretty cool, which in part comes from it being really easy to use. It asks you to take a photo of yourself, or pick one from your camera roll, and then turns that into a cartoon illustration, just like the ones you pay $30 for at a theme park.

Once you've chosen your photo, you tell the app whether you're a boy or girl. Then you align little moving targets to your eyes and mouth. Within a few seconds, your beautiful visage is transformed into a sepia-toned caricature. You can then choose from various backgrounds (Grim Reaper? Hugging Mao? Going fishing?), chin shapes (always go chiseled), hair styles, facial hair options, spectacle styles, and even eyebrows. 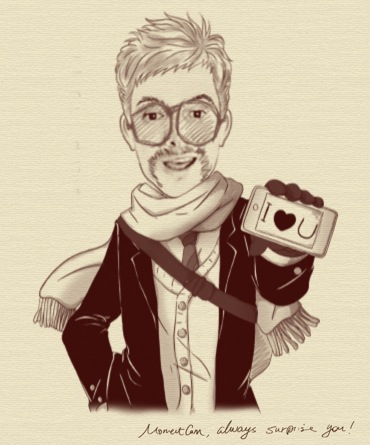 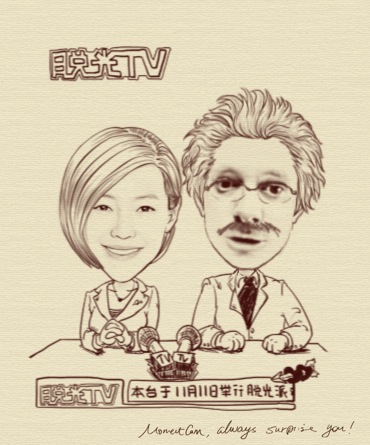 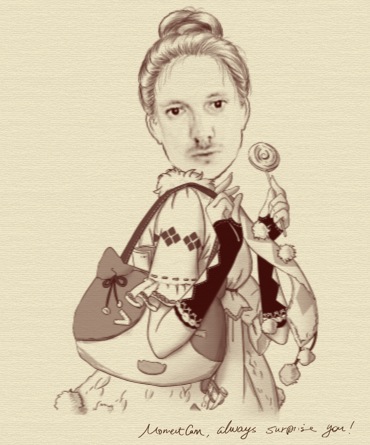 Once you're finished, you can save the photo to your camera roll, or share it to one of your favorite, um, Chinese social networks. (Twitter and Facebook integration surely can't be far away.)

This app is a bunch of fun.  I played with it for just a few minutes and in that short time created three stunning portraits – one as TV news presenter, one as an insufferable East Coast hipster, and one as a mustachioed girl with a lollypop (see above). However, it is also the sort of gimmicky app that I'm sure I will tire of quickly, even if it does, through its self-deprecating jocularity, provide a sort of weird justification for the selfie.

So, will it catch on in the US?

I predict that it will. For about five minutes.