That queasy feeling when a Web rally starts losing steam

What happened to the Great Web Rally of 2013?

Until two months ago, investors were clamoring for companies in the sector so much they were willing to buy stocks with triple-digit PE ratios. They snapped up well-known names that had a track record of losses. After years of shying away from Web stocks, investors couldn't get enough.

There were two reasons for the rally. First, 2013 marked the year when companies began to make money on mobile users. Consumers and businesses had shifted their attention to the mobile Web, and once Facebook and others showed that attention could be monetized, Wall Street was sold. Second, central banks were signaling that the years of easy cash were coming to an end, so investors began to look for havens with the potential for long-term growth.

As a result, the first nine-plus months of the year were kind to Facebook, as well as smaller companies that had ventured into public markets in recent years, like LinkedIn, Yelp, Pandora and Groupon. Some of these companies were not long ago considered lost causes. Now they were sought after by hedge funds and other institutional investors.

By late September, all five of these stocks had doubled from the beginning of the year, while two of them – Yelp and Pandora – had tripled. 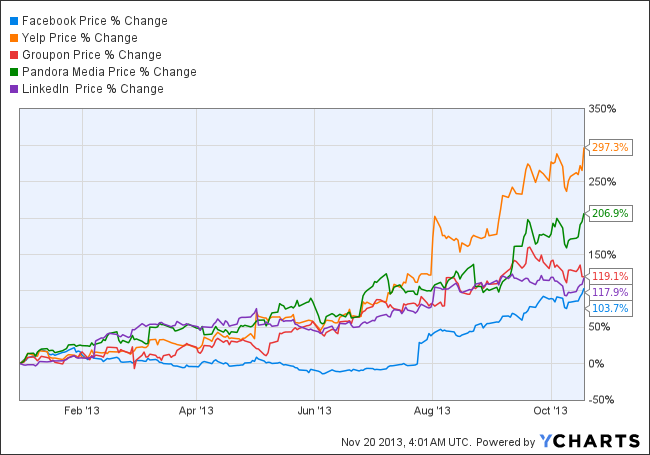 Over the past two months, however the charts of these five stocks don't look as bullish. Pandora continues to edge higher (irrationally), the others have been slumping. 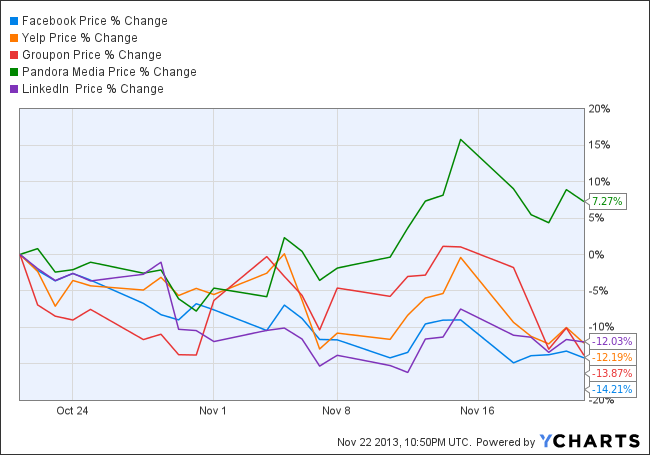 The declines erase only a small portion of the gains these stocks saw earlier. One possible explanation is that it could be a simple correction as investors lock in gains, take a breath, wait to see what's ahead. It's also telling that the shift seems to have started right around when most of these companies were reporting earnings for the three months through September.

Facebook's revenue growth has risen in its past two quarters as the company has delivered surprisingly strong mobile revenue, which now make up nearly half of Facebook's total revenue. But in its conference call with investors in late October, its ad-load question came up: How long can Facebook stuff ads into mobile news feeds before they begin to backfire?

Even without more mobile ads, Facebook will keep growing if it can charge more for better-targeted ads (very likely) and if its users engage with the site more (much less likely). Facebook indicated it won't be inserting more ads into mobile feeds in coming quarters. In the near-term, this is a bigger concern than the teen-usage issue that grabbed more headlines.

In addition, Facebook's revenue has been growing 60 percent a year partly because, in the year-ago quarter, its mobile ad revenue was just taking off. The year-on-year comparisons won't be as favorable going forward. The stock, however, has been priced as if its growth rates will continue to be this strong for some time. That's a bold bet to make.

This gets at the issue nagging at companies that are enjoying the boom in mobile ads. Everyone believes that revenue from the mobile Web has a bright future. But if everyone knows it, it's been priced into Web stocks. It will take a few big surprises to power the rally into coming months. But the most likely surprises are likely to be speed bumps, like Facebook's ad-load issue.

Or take Groupon. The company is seeing a revival for two reasons: Its mobile app is popular with regular users, and it's made a successful transition away from daily-deal emails and toward a searchable database of more durable discounts.

Recently, the stock has stalled since the company reported revenue below analysts estimates and warned that revenue in the current quarter would also fall shy of Wall Street's consensus. Groupon has been focused on improving its bottom line, but the disappointment in top-line revenue suggests that focus could be coming at the expense of what has been Groupon's strength all along.

The exception to the trend of declining Web stocks has been Pandora, which reported its own earnings on Thursday. Pandora's report delivered few surprises, with profits and revenue in line with or above expectations. The stock has held up on the same platform promise that has driven Twitter, Facebook and LinkedIn: It offers a proven service that customers are drawn to strongly enough that more services can be built on top of it.

But the Pandora rally departs from its peers in that it continues to sustain a level of speculation. Pandora is facing challenges from Apple and holding its ground for now, but the burden of payments to labels weighs on its ability to post a profit. So analysts who are encouraged by the company's progress remain skeptical about its valuation – a cognitive dissonance that analysts must straddle when stocks are overtaken by momentum.

That disconnect has been haunting major Web stocks for some time now. Even after the modest correction that many of them have seen, they still seem disconcertingly overpriced.

Yes, the foundation that Facebook, LinkedIn, Pandora and others have built may grow into solid platforms that deliver profits for years to come. But there's a lot of uncertainty between today and that sunny future.

Forget how often it pays to bank on something uncertain. How often does uncertainty pay when it comes at such a rich premium as these stocks demand?