First, the researchers identified 10 of the highest-income cities in America (including New York, San Francisco, and Napa, California) and 10 of the lowest (including Monroe, Louisiana; Cumberland, Maryland; and Lake Havasu City/Kingman, Arizona). Then they compared various site metrics across the cities, including time-on-site, pages per visit, page views per capita, and common search terms.

The most pronounced differences were observed when comparing time-on-site and page views per capita. In wealthier communities, the average visit duration was 9 minutes and 54 seconds, whereas in less wealthier communities, the average was 11 minutes and 5 seconds. However, the pageviews per capita in high income cities was 9.44 while in low income cities it was only 6.74. It could be that high-earning pornhounds are simply more efficient in their consumption. More likely this is due to faster Internet connections and higher Internet penetration in high-income communities. 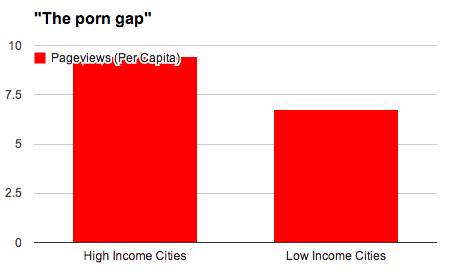