Spying a gap in the market for computer games featuring bearded drag queens, a New Zealand company is attempting to fund what it is billing as “a game so gay it is beyond the rainbow.”

Updo Entertainment, founded by drag queen LaQuisha Redfern, is halfway through a Kickstarter campaign in an effort to raise NZ$69,000 (US$57,000) to fund the development of “LaQuisha’s Odyssey,” a retro role-playing game fashioned after “Leisure Suit Larry”.

The game, says Redfern, who by day is a mild-mannered IT worker named Conrad Johnston, is supposed to be a venue to celebrate gay and transgender culture free from commercial constraints. “Gaming is one of the last places free from the censors and pressure from advertisers,” Redfern said in an email to PandoDaily.

The game’s Kickstarter page says “LaQuisha’s Odyssey” will be “a warm blanket of campy comedy, celebrating the hilarious best of queer culture and poking fun at the world at large.”

The bearded Redfern, of course, is the game's main character. You play as her as she sashays through six levels in an effort to rescue her mother, who has been abducted by aliens. The quest is set against a backdrop of a vast international conspiracy, and LaQuisha has to negotiate surly night-club bouncers, a smug psychotherapist, and hipsters at her local cafe to win.

The game is being developed using Gamefroot, online game creation software that is built on Wordpress. Gamefroot is the creation of Dan Milward, who is friends with Redfern.

Going by its current rate, it’s looking like “LaQuisha’s Odyssey” will fall well short of its $57,000 target, a number that seems excessively high for a one-off game. Redfern says the company needs the big sum to pay for development, design, marketing, and testing. With 16 days to go, the campaign is about $53,000 short of its target.

Even if the game doesn’t get funded, however, we can at least still enjoy the concept art that the Updo people have put together. If you ever wanted more cross-dressing with your “Leisure Suit Larry”, this is clearly the game for you. 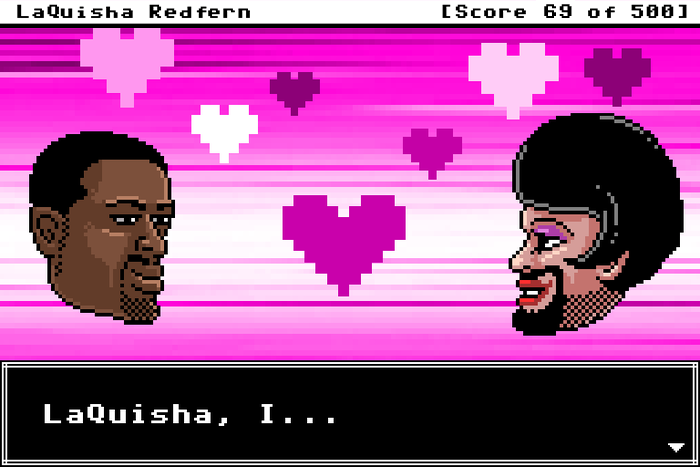 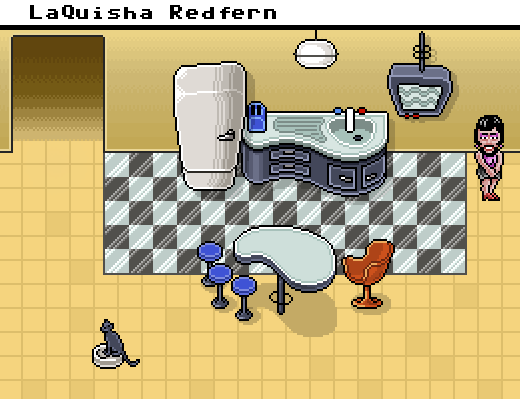