Facebook and Google were both said to be trying to buy WhatsApp. Japan’s Line is mulling an IPO. China’s WeChat is becoming a threat to the country’s equivailent of PayPal. Snapchat turned down a $3 billion acquisition offer from Facebook. All of the top 10 games in South Korea’s App Store have come via KakaoTalk.

Messaging, it is clear now, is the killer app on mobile. These apps are growing at a rate not seen since the early days of social networking in the mid-2000s, when Cyworld, Mixi, Friendster, Bebo, Orkut, MySpace, and Facebook jostled to create the world’s biggest social graph, a web of connections that personalized the Internet. WeChat, not yet three years old, has more than 270 million active users. WhatsApp has 350 million active users. Line and KakaoTalk count their users by registered accounts. The former passed 300 million the other day; the latter has 110 million.

Seldom mentioned among this clutch of frontrunners, however, is the app that I think could be the dark horse of the Internet – a potential bolter that has built a deep and defensible moat around its product, and one that has zagged when all others have zigged. (Okay, so in that orgy of mixed metaphors we’ve got horses building moats while running from side to side. Um, forgive me?) This app, while it faces very real challenges, has locked down key advantages in its technology and it is starting to deliver the kinds of numbers that, if they were emanating from Silicon Valley, would be the chatter of the venture capital community, if they could only shut up about Snapchat for five minutes.

That app hails from Waterloo, Ontario. It is called Kik.

Having said that messaging is the killer app on mobile, it may sound like contradiction to say that messaging is also a commodity, but that, too, is true. On my iPhone’s homescreen, I have a folder that contains six messaging apps, and the messages come to me by push notification. I don’t really care which app I use to respond, but I do care about the stuff around those messaging experiences – the tools, the timelines, the connected apps. If you agree, then, that a communications platform is more important that a pure-play mobile chat app, then Kik deserves the same attention you give to WeChat and Line, and more than you give to WhatsApp.

And finally – crucially – if you believe in the mobile Web, then there is no other: Kik is the answer.

A lot of people, of course, don’t believe in the mobile Web. Mark Zuckerberg has said Facebook’s biggest mistake was betting too much on HTML5. Many developers and users think that native applications provide a faster, smoother experience than can be found with Web apps. But Kik, which in April put the final pieces into place for its HTML5 platform, has created a super-charged mobile browser that uses cacheing and background downloading to provide a fluid user experience. That opens up the sort of monetization opportunities currently being exploited by WeChat, Line, and KakaoTalk – in-app purchases, payments, games, virtual items, brand relationships, ecommerce – but it places them in the context of the open Web, mostly free from the restrictions imposed by devices, app stores, or operating systems.

Kik launched as a cross-platform messenger in 2010 and saw insane growth for the time, blowing by 1 million registered users in two weeks. Remember, this is back when people bought BlackBerrys. Part of Kik’s appeal was that it was compatible with BlackBerry, iPhone, and Android. But then BlackBerry owner Research In Motion, Kik founder Ted Livingston’s former place of employ, blocked the app from its app store and sued Kik for patent infringement. (The suit was finally settled just a few weeks ago.) Kik was forced to rethink its entire business.

As a result, Kik decided to bet on the mobile Web. It has spent more than two years now building out its HTML5 platform, which is predicated on “cards,” which are actually apps. For instance, in my version of Kik, I have access to cards that let me create and send memes, photos, YouTube videos, and drawings, to name a few. These are not, however, native apps living within a native app. They are, effectively, little websites running inside a mobile browser. And they run perfectly. 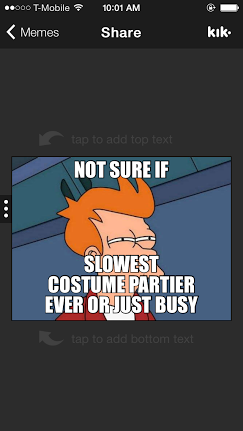 Some of these little websites are games. In July, Zynga quietly launched its first game for a mobile chat app: “1 Word.” I’ve since heard that the game picked up 1 million users in one 24-hour span. The same is true for a Kik-only game called “Costume Party,” which passed the 1 million user milestone within 22 hours of its launch. I introduced my girlfriend to the game, and now she gets furious when I don’t play my turn within 12 hours. She Kiks me angry memes to pressure me to play.

Beyond games, though, Kik is also showing up with some serious numbers. Its App Store ranking over the past year has been consistently high over the last year, according to AppAnnie. It is closing in on 100 million registered users, according to latest figures provided by the company. According to Distimo, over the last month Kik was downloaded more times in the US than WhatsApp (but fewer times than the just-launched BlackBerry messaging app, and fewer times than Snapchat).

Kik's App Store rankings over the past year, via App Annie. 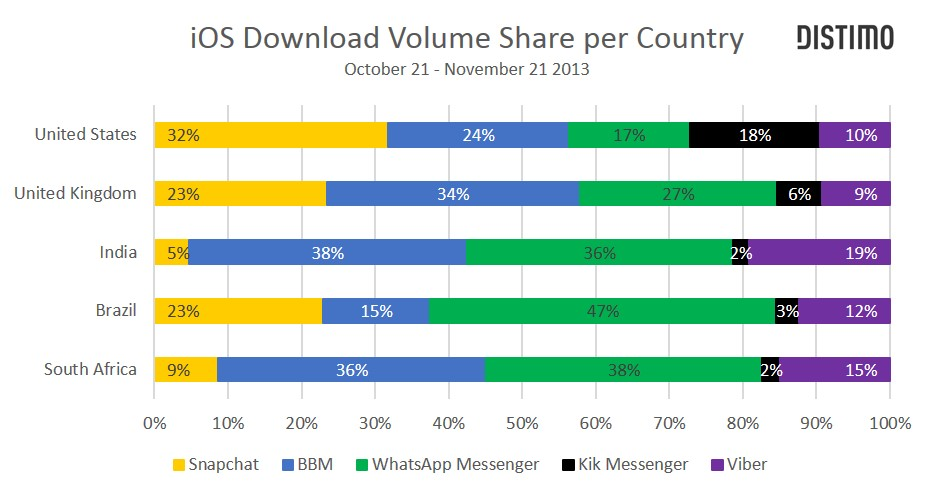 iOS downloads by region for the last month, via Distimo.

In the App Store charts, it ranks below only Snapchat among free messaging apps, and it is just behind Twitter. It is two places ahead of Skype and three places ahead of WhatsApp. In the Google Play charts, Kik takes its place just behind Facebook Messenger, Snapchat, and Skype, and just ahead of Twitter.

If you search for the #Kik hashtag on Instagram, you can find more than 18 million posts. The Facebook hashtag on Instagram has just under 5 million. Snapchat: just under 5 million, many of which seem to be photos of body parts. Line: 1.3 million. WhatsApp: 650,000. What this shows is that people – mostly young people – are using Instagram as a way to find new friends. Kik likely performs so well in this venue because it doesn’t require users to tie their accounts to a phone number. You just choose a username, and then the app behaves kind of like email. People feel their privacy is protected. 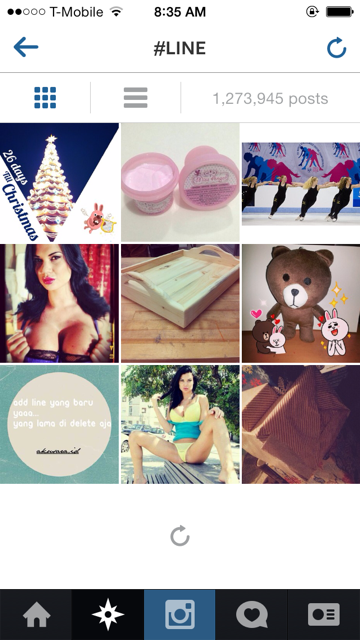 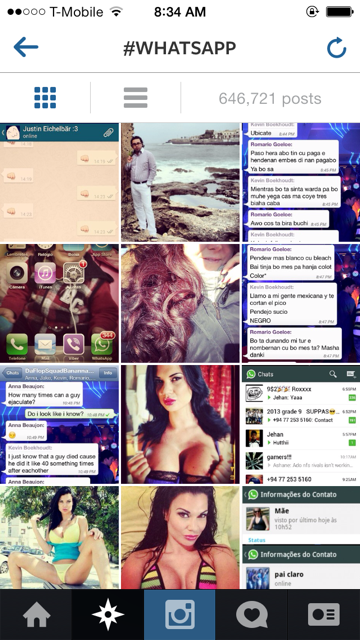 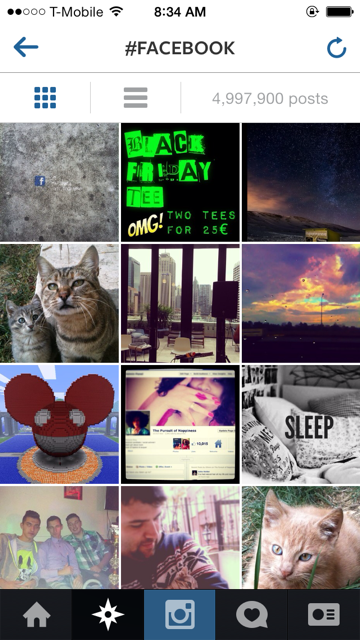 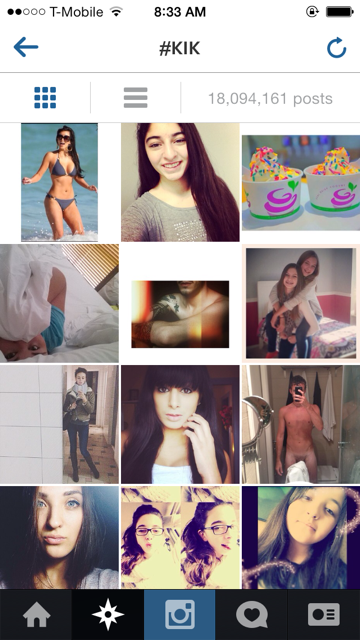 Of course, a lot of this activity might be attributed to sexting. And Kik, as The Kernel has pointed out, certainly has reason for concern on that count. Its reviews on Google Play are littered with people trying to find sexting buddies. But give people a messaging tool and teens are bound to use it for sex chat.

Kik has 100 million registered users, and not all of them are slinging dick pics. That much is evident from the sample of Instagram photos that bear the #Kik hashtag – while there are a few dicks in there, the photos on the whole are a hell of a lot more wholesome than the Snapchat sample (which was too dirty to post in the gallery above). It’s also evident in those download numbers for “Costume Party” and “1 Word.” If everyone on Kik is sending each other their rudey bits, at least they’re also playing games.

A more significant problem for Kik, however, may be its brand. I'm 32 years old and few people my age seem to know it. None of my friends use it, even though most of them have at least heard of WhatsApp and in some cases are heavy users.

Kik also suffers, I suspect, from being based north of the border, in a quiet city that is far removed from the hype cycles of Silicon Valley. When it comes to building a strong product away from the eyes of competitors, and avoiding the sort of group-think that can lead you down troubled paths, that can be an advantage. But when it comes to marketing and public relations, that distance can become a serious handicap.

To a large extent, chatter, money, and activity in Silicon Valley still drive media attention for startups and set the agenda for which apps the world agrees it needs to pay attention to. From where I sit as a tech reporter who covers messaging apps, I can tell you that Kik is doing a much poorer job at communicating its brand than WhatsApp, Line, and even Tango and MessageMe. For as long as it keeps its headquarters in Waterloo, it’s hard to see it ever breaking out of that straitjacket.

But that obscurity-by-geography coupled with a lack of ability to talk about itself in compelling terms is also why I think Kik is a dark horse that could be in the process of mounting one of the most significant sneak attacks of the mobile era. It’s not an exaggeration to say that the future of the mobile Web will rest in part on its success or failure. None of the other giants in messaging – not WeChat nor Line nor WhatsApp nor KakaoTalk nor Facebook Messenger – are built for the mobile Web, and none have come close to figuring it out.

But Kik has. The consequences of that could be enormous. Within five years, several billion people will own smartphones. Messaging apps will be at the center of those experiences. They could very well be bigger and more pervasive than even the largest social networks. Most of those will be native apps. And perhaps the natives will win. But only one app has bet everything on the mobile Web.

And what if the mobile Web ultimately prevails?

It's time to start paying attention to the dark horse of the Internet.