Viral content is going to be a terrible business model

BuzzFeed and Upworthy are the best known of the bunch, and have come up with some innovative content models that garner huge Facebook referral visits. Their ingenuity has proven easy to replicate, though, and given rise to sites like Distractify and ViralNova.

And while BuzzFeed proves that a great business can be built on top of Facebook at the moment, there are a lot of issues that will ultimately need to be resolved if Distractify, ViralNova, Upworthy and the rest can make it in the long-run too.

Business Insider cited the over-arching systemic risk of Facebook pulling the carpet out from under these companies, as they did with Zynga, Viddy, Slide, and many many others in years past.

But what are some of the other issues with a model that relies almost entirely on Facebook for visitors?

Here are a few that — to the best of my knowledge — have no easy solution:

If you are the advertising agency for Ford Trucks, and you want to spend $500,000 on a great digital campaign, you will be looking for two things. First, you want a site that can deliver an innovative and eye-catching campaign with unique products and sponsored content. Second, you want to appear on a site that is reaching primarily male readers in their 20’s and 30’s.

That’s pretty much it.

Of course, scale, inventory, technical compatibility, and customer service matter too, but the two factors cited above are what set one big site apart from another.

The problem for sites that depend upon viral traffic is that they have no idea who is going to come to their website one month to the next. This month, an article about adorable cats might go viral, bringing middle-age women to the site. Next month, an article about half-naked Miley Cyrus might go viral, bringing teenage boys to the site. And when a single article often drives 30 percent of a given month’s visitors, it can lead to massive demographic swings.

How can a web property build deep and meaningful relationships with brands over the course of many years, when their own audience has no consistency?

In contrast, look at a site like TheVerge, whose traffic is much lower than that of Upworthy. Those brands who choose to buy advertising on TheVerge know that they will reach young, tech-savvy men with high disposable incomes and a taste for technology. So you better believe that Samsung will want to appear on TheVerge. For them to buy $500,000 of sponsorship on Distractify is a far less obvious fit.

For starters, the campaign is booked six months in advance, and it is expected to last for an entire season. To that end, the Advertising Operations staff must be able to forecast exactly how much inventory is available six months out.

How a Facebook-dependent site can accurately plan six months out is a complete mystery, since the task is damn near impossible.

But there are more complications than that.

Advertisers also expect the campaign to deliver on a smooth and consistent basis. They will be furious if 10,000,000 impressions deliver on one day, and then very few deliver on the next day. They want to know that a 12-week campaign delivers approximately 1 percent on each given day.

Because viral traffic comes in surges and plateaus, such campaign pacing obligations will never be met.

In short, the operational side of advertising is a lot more complex than people realize. At many companies, the advertising operations team is larger than the sales team, simply because there is so much sophistication to a successful campaign delivery. In every media company, the VP of Advertising Operations is among the most relied-upon person in the entire organization.

Great campaign management requires tremendous planning, attentiveness, and a surgeon’s precision. Viral traffic from Facebook is like an earthquake in the operating room.

There isn’t a lot to stop a site like Distractify from launching.

What’s more, a lot of the same content is appearing on these sites. It’s not unusual to see the same infographic, cat meme, inspiring video, or Music Award blooper hosted on four or five different sites. And it keeps working. For everyone.

This means that more sites will enter.

It is very possible that BuzzFeed and Upworthy will one day find themselves competing with 30-40 clones who are equally adept at the formula. That’s not to say that the original sites won’t have some scale or data-driven advantages. They also have the money to promote content when needed.

But it’s going to get harder.

They may find that the ‘pops’ are occurring less and less as time goes on.

And, let’s face it, a lot of these guys are just ripping off one another. See the image below that I pulled from a quick visit to their Facebook pages: 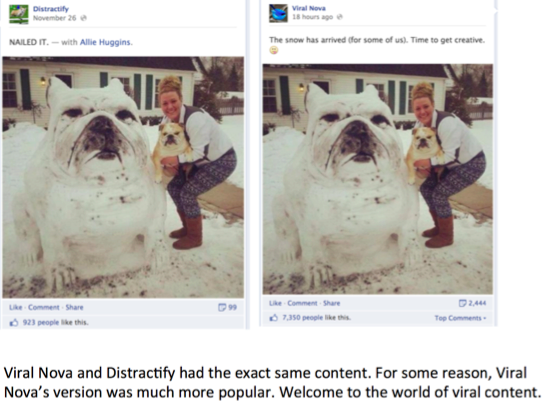 By now, even a twelve year old has a sense for the type of content that goes viral on Facebook.

And that content is precisely the type that doesn’t really fit into the traditional verticals that major advertising brands like to circle around.

Sports content struggles on Facebook, as most users do not share the same team affinities with their friends. Hobbyist content has the same problem — what portion of your friends also like to fish or race motorcycles? And what about Fashion or Beauty content? Probably not going to be a viral hit.

In general, the content that thrives on Facebook is defined by the breadth of its appeal. Anyone can find a dog cute or take five minutes to read an inspiring story. But that isn’t really going to sell trucks.

Solving the ‘voice problem’ is not an easy fix. It involves a radical transformation of one’s editorial operation, and small changes can greatly undermine viral potential. BuzzFeed’s much-imitated voice was a function of what worked for virality. To some extent, it was reverse-engineered. And much of their recent investment under Ben Smith has been an effort to diversify in the face of this reality. It will probably work for them, but it’s unclear that it will work for their clones.

Until someone can figure out how to make footwear content go viral, the nice folk at Refinery29 are probably in fine shape. Even if they get way less traffic than Distractify.