Google, the Omidyar Network, and Ashton Kutcher are among the leading investors in civic technology according to the Knight Foundation’s first report on the subject, which is being released today.

In “The Emergence of Civic Tech: Investments in a Growing Field,” the first report of its kind, the Knight Foundation sheds a light on an emerging field of technology that until now has been not well understood. The report tracks more than $430 million of investments, philanthropic contributions, and grants by private funders and foundations in technology that spurs citizen engagement, improves cities, and makes government more effective. The report, which covers organizations funded between January 2011 and May 2013, is the most comprehensive review of civic technology activity in the US to date.

The Foundation partnered with San Francisco-based data analysis specialists Quid and data visualization firm Fathom to map the data in an easy-to-digest interactive graphic that tracks investments by themes, clusters, and organizations. 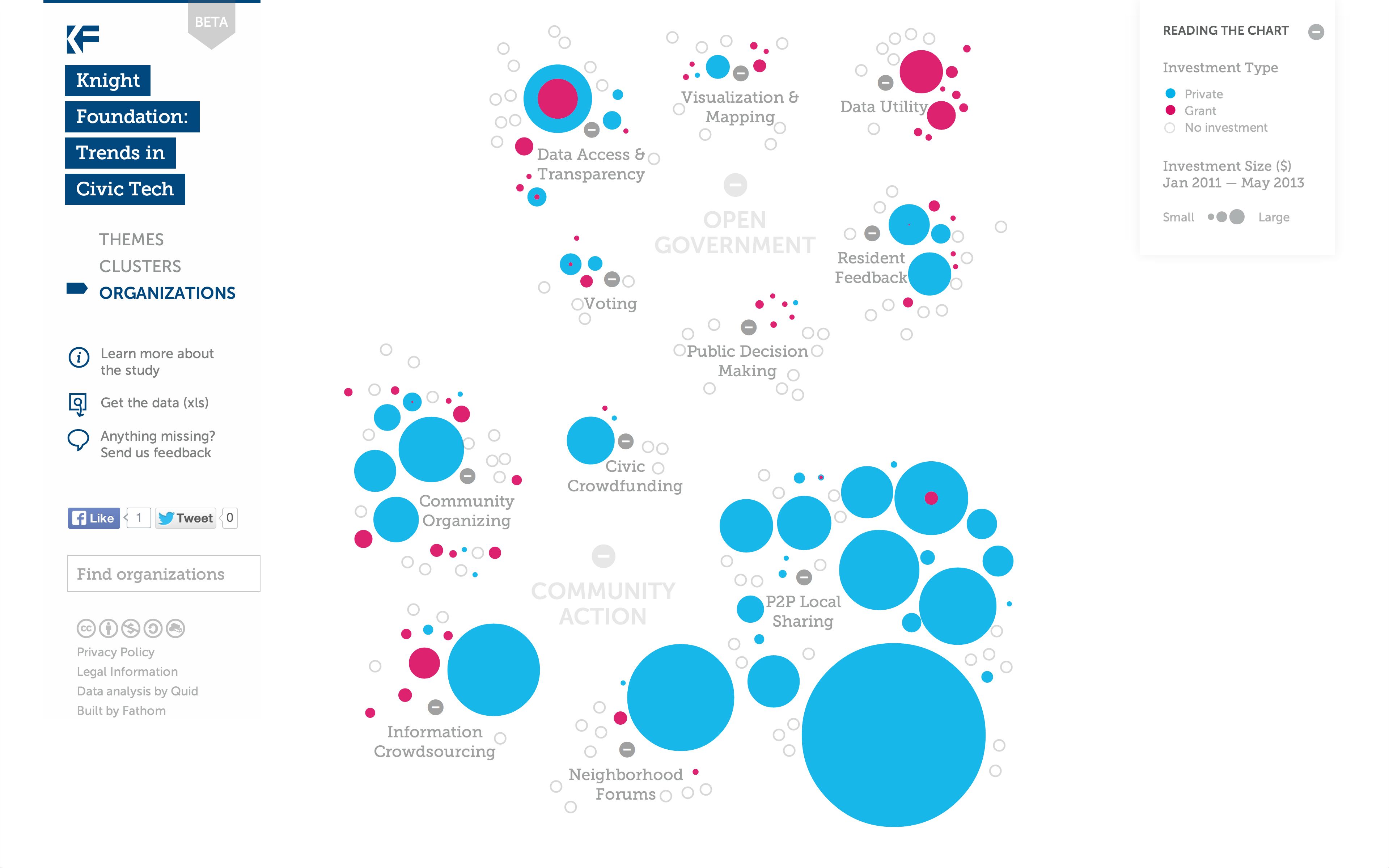 Central to the Foundation’s findings is that there has been solid growth in civic technology, which can be broadly broken down in to “open government” and “community action” categories, with a 23 percent annual growth rate in the launch of related companies since 2008. However, the report’s authors note that private investors and foundations ought to coordinate their efforts and pursue co-investment opportunities to advance the field. Of the 177 projects that the Foundation identified as receiving funding, 76 found their money via private investments, and 101 were funded by grants. 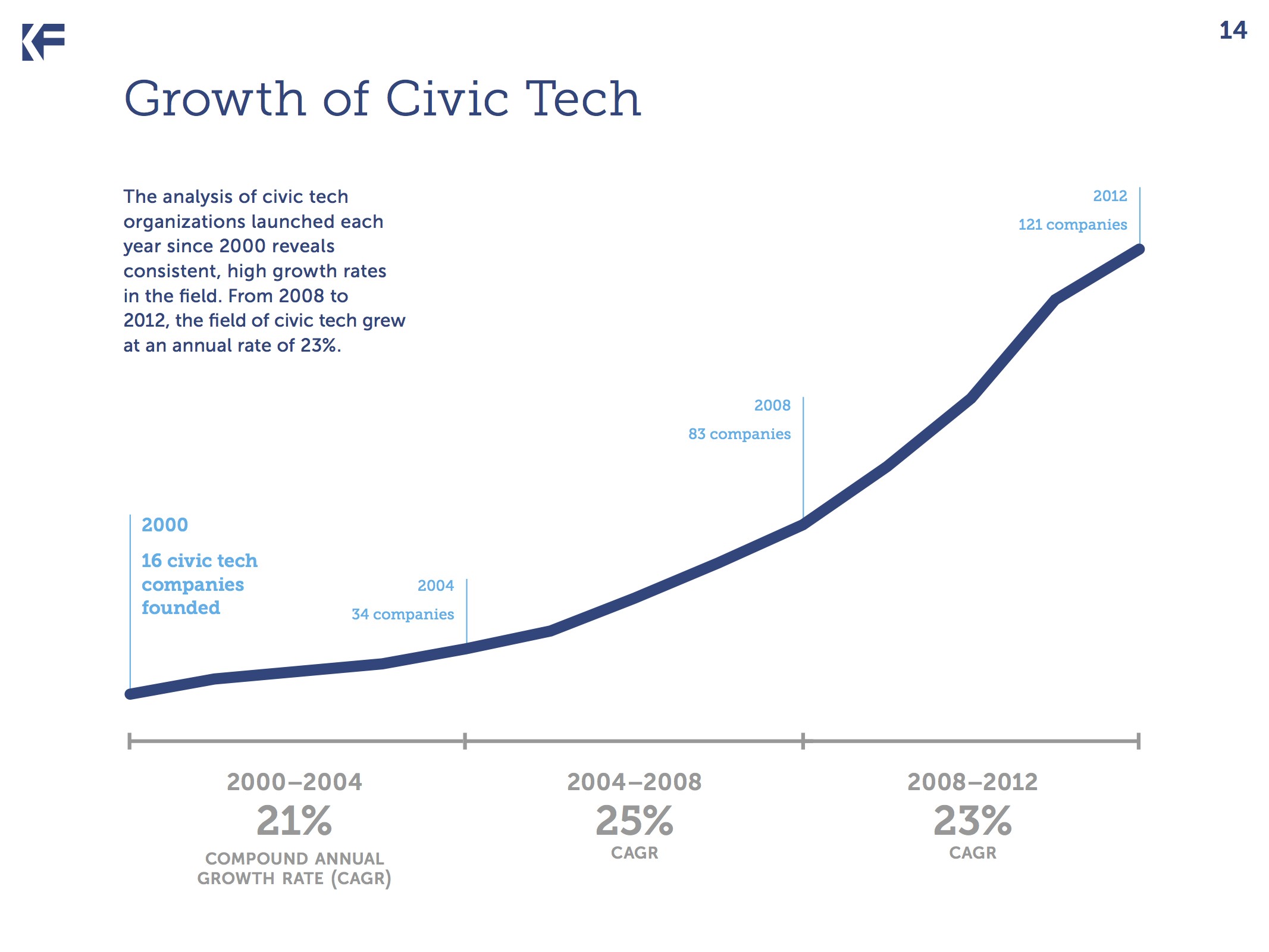 The government and civil service sector is one of the last remaining sectors to feel the full brunt of disruptive technology, in part because investors and entrepreneurs have long seen it as highly regulated and prone to bureaucratic obstacles. Indeed, despite the promise shown in this report, it is a sector that is still under-served by tech startups and the investment community. While that 23 percent annual growth rate and the $430 million aggregate sum might seem healthy, it is distorted by the Knight Foundation’s decision to include peer-to-peer sharing startups such as Airbnb and Lyft in the civic technology category. (Meanwhile, by comparison, the mobile health sector brought in $907 million in venture investments in 2012 alone.) Crowdsourced traffic data startup Waze, which was recently acquired by Google for $1 billion, was also included in the set.

The Foundation’s definition of civic technology was broad enough to include those companies on the grounds that they enabled people to take action in their communities. If they relied on assets that were owned by a community member, rather than a business, the Foundation reason, they could be counted. So, Lyft and Airbnb made the cut, but Zipcar and Uber didn’t.

Businesses in the peer-to-peer category, which accounts for Airbnb and Lyft, made up $234 million of the $430 million that the Foundation counted. All the other categories combined – a list that includes resident feedback, data utility, data access, public decision-making, mapping, voting, community organizing, information crowdsourcing, neighborhood forums, and civic crowdfunding – pulled in $196 million between them. Leading civic tech organizations outside of the sharing economy group include NationBuilder, Nextdoor, Code for America, and Change.org (whose founder, Ben Rattray, is pictured above).

While the lion’s share of civic tech investment dollars has been flowing into peer-to-peer sharing and community organizing, there remains an opportunity for private firms to get more involved with open government initiatives, such as the public policy dashboard offered by Techstars alum Outline, and voting transparency nonprofit TurboVote.

“I think the field is wide open,” says Mayur Patel, the Knight Foundation’s vice president of strategy and assessment. “Compared to other market sectors no one is at a level of maturity.” He expects to see much more disruption in open government in the coming years.

Part of the reason the Foundation worked on this report was to help it identify potential areas for future investment in the civic tech landscape. But it also wanted to bring information on the sector under one umbrella and make it available to all-comers. “Our goal on this from the very beginning was to make all of the data publicly accessible,” says Jon Sotsky, the Foundation’s director of strategy and assessment.

Quid’s Sean Gourley sees the data visualization project as an attempt to re-think how civic technologies are funded and better assess the impact of philanthropic investments. “This is an incredibly important problem,” says Gourley. “We’ve relied on market forces to dictate the direction of technology, and it’s given us a world of technology that is oftentimes optimized toward ad revenue or consumer consumption.”

Here is a chance, he reasons, to take a look at what the market forces sometimes miss.