Thanksgiving app usage has tripled in the last two years. Welcome to the new holiday tradition

Thanksgiving has never only been about togetherness and gratitude. For almost a century the holiday has also been about grand parades, and it's been associated with football even longer. People want to be entertained while they devour turkey and enjoy -- ahem -- a day with their families.

Flurry, a mobile ads and analytics company, today released a report detailing the increasing rate at which that entertainment is enjoyed through smartphones and tablets. The report states that Thanksgiving app usage has tripled in the last two years, and consumers are using their smartphones on turkey day more than they do during the average week. Here's how that looks in graph form: 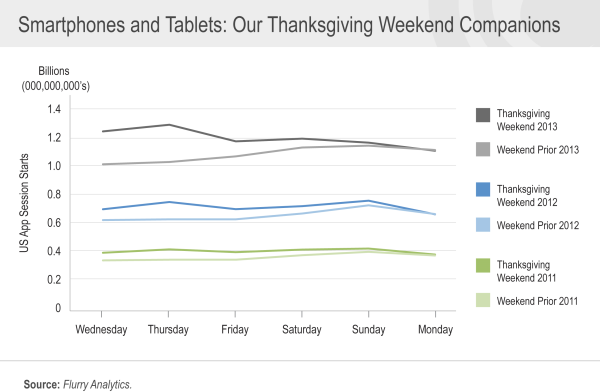 You might think that this growth is caused by the post-holiday shopping extravaganza, but shopping apps didn't see as large a usage bump (20 percent) as mobile games (30 percent) or media apps (50 percent). People aren't pulling out their smartphones to prepare for Black Friday so much as they're entertaining themselves during the after-dinner torpor.

The findings correspond with those from the Interactive Advertising Bureau and Signifyd, both of which reported that consumers were using their smartphones as shopping assistants more than they were using them as a new way to make purchases. They spent more money on purchases made through their smartphones and tablets -- especially if they were trying to make fraudulent purchases -- but they haven't yet relegated these devices to shopping tools.

As Flurry says in its report:

This data shows the extent to which smartphones and tablets have become our constant companions, morphing their function to our whims and circumstances in ways even laptops never really did. They are truly our most personal computers. Sure, you can use them to shop without getting out of bed, let alone braving crowds at the mall, but your device can also entertain you with games, music, and movies.

Thanksgiving has never only been about togetherness and gratitude -- now, in addition to finding entertainment through gigantic balloons and stitched leather, it seems that people are finding their jollies through their smartphones and tablets, too. Welcome to the new holiday tradition.