Pierre Omidyar in 2009: "Anybody who publishes stolen info should help catch the thief"

As regular readers will know, over the past few weeks, Pando has published arguments on both sides of the debate around the fact that Glenn Greenwald and Laura Poitras, the only two people with access to Snowden's NSA Secrets (TM),  have both been hired by eBay founder Pierre Omidyar to run his new journalism site.

One of the most controversial questions is whether Omidyar's pro-business, apparently libertarian worldview means his reporters will be encouraged to report on government wrong-doing but discouraged from applying the same scrutiny to business. It's an important question, not only because it was big business who tanked the global economy in 2007, but also, as Yasha Levine wrote this morning, because the government is increasingly contracting private companies to do its dirtiest work.

Even Greenwald supporters like Pando's David Sirota have admitted that, at best, we don't know what Omidyar's approach to reporting on business will be. In our debate on the subject earlier this week, he advocated a "wait and see" approach.

It's certainly true that, to know how Omidyar would react if a Snowden-esque source arrived with a cache of leaked corporate documents, we'd need a concrete example of that happening.

Fortunately, thanks to Twitter-troll-turned-Greenwald-critic OhTarzie, we now have an answer. Tarzie found the following Tweet from Omidyar, posted back in 2009 after TechCrunch published leaked documents from Twitter. 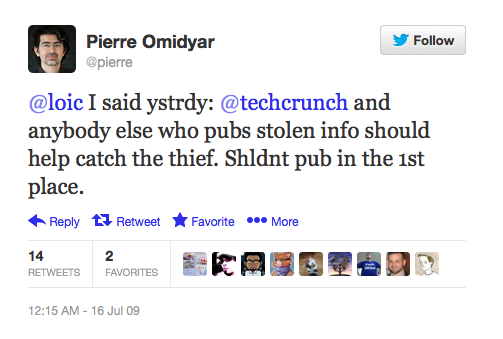 So there you go. A definitive answer, direct from Glenn Greenwald's new boss. "TechCrunch and anybody else who pubs stolen info should help catch the thief. Shldnt pub in the 1st place."

Rest easy, corporate America, your secrets will be perfectly safe with Pierre Omidyar. And if anyone is considering approaching Greenwald or his new boss with leaked corporate documents, don't be surprised if their first call is to the FBI.

Update: No-one has pointed this out yet, but it's been bugging me that I didn't include a disclosure that I joined TechCrunch shortly after the leaked Twitter document story cited above.

For what it's worth, I think there's probably an interesting discussion to be had around whether hacking government documents from the inside is different from hacking corporate documents from the outside. Even more interesting, though, would be for Pierre Omidyar to clarify in what circumstances he believes a journalist has a duty to ensure a source -- whether leaker or hacker -- is apprehended and jailed.