Snapchat vs. SpaceX: Which gets more attention?

On the one hand, we have Snapchat, an immensely viral app that lets people send disappearing messages to each other. It has been in the news recently for turning down a $3 billion acquisition offer from Facebook, for having no clear revenue model, and for an increasingly ugly dispute between its frat-brother founders.

On the other hand, we have SpaceX, an 11-year-old company that makes and launches rockets. Last week it launched a rocket that put a satellite into orbit a quarter of the distance to the moon for a price of just $55 million – compared to the price of $100 million to $260 million offered by competitors – potentially setting off a space price war. In the process, it also cemented itself a revenue line independent of NASA contracts, which will accelerate its goal of sending humans to, first, the International Space Station, and, later, Mars. In September, SpaceX completed a flight test that proved it had all the parts necessary for reusable rockets, a development that would drastically reduce the cost of space travel. In October, SpaceX sent its test Grasshopper rocket 2,400 feet in the air, let it hover for a bit, and then brought it back down to land on its launch pad.

So, who do you think gets the most online attention?

I wondered this yesterday after reading a Foreign Policy piece on Elon Musk written by Michael Belfiore. In the article, Belfiore suggested that Musk’s work with SpaceX gets less notice than his work with Tesla Motors, the electric car company. That might be true, I thought, but the more interesting comparison would be with Snapchat, the app du jour, and seemingly a daily fixture in the news.

Messaging app vs rocket company. A computer program that enables connections vs a space program that aims to make human life multi-planetary. Or, as my colleague Erin Griffith puts it, a kid’s game of telephone vs ROCKET SCIENCE.

Which do we Internet beings care most about?

Well, let’s look at some stats.

In the last year, the New York Times has published about 540 articles that contain the word “Snapchat.” 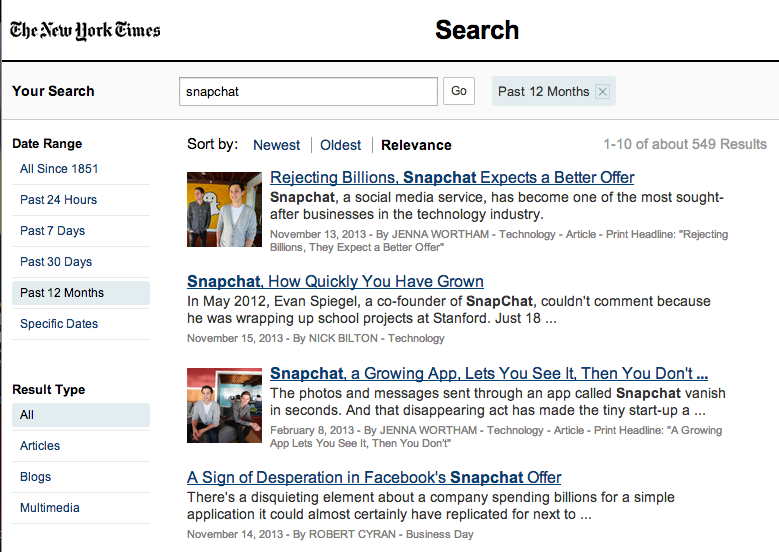 Over the same period, it has published about 100 articles that contain “SpaceX.” 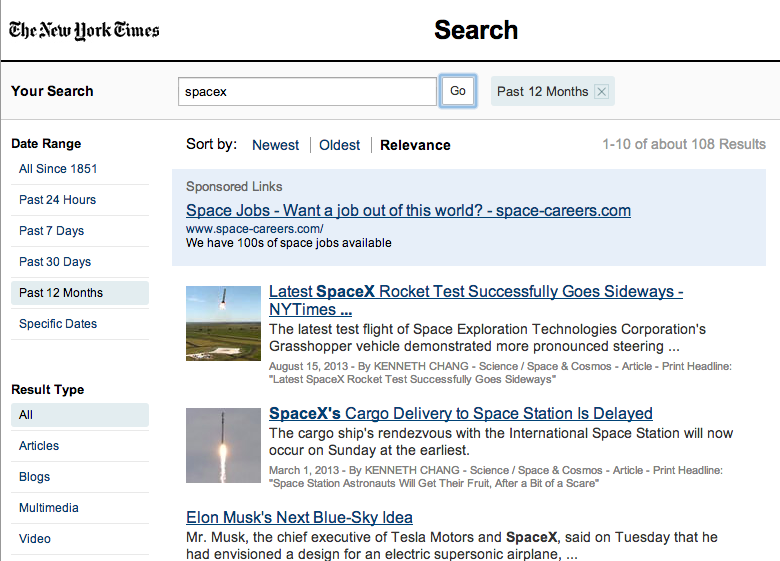 Google Trends shows that over the past year people have been searching for the word “Snapchat” more than they have “SpaceX” by a factor of 21. 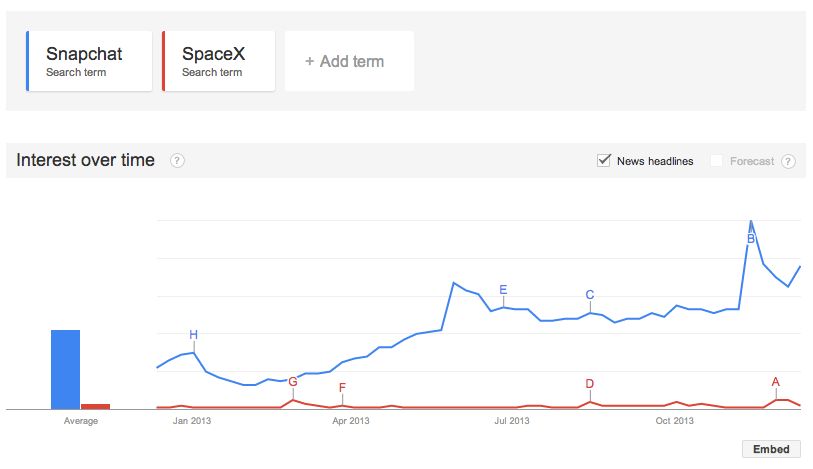 SpaceX has 278,000 Twitter followers, compared to Snapchat’s 120,000, but according to Topsy, there have been 3.9 million tweets about Snapchat over the past 30 days.

The same search for “SpaceX,” which has been around nine years longer than Snapchat and therefore accounts for a wider period of coverage, returns 44,600 results. 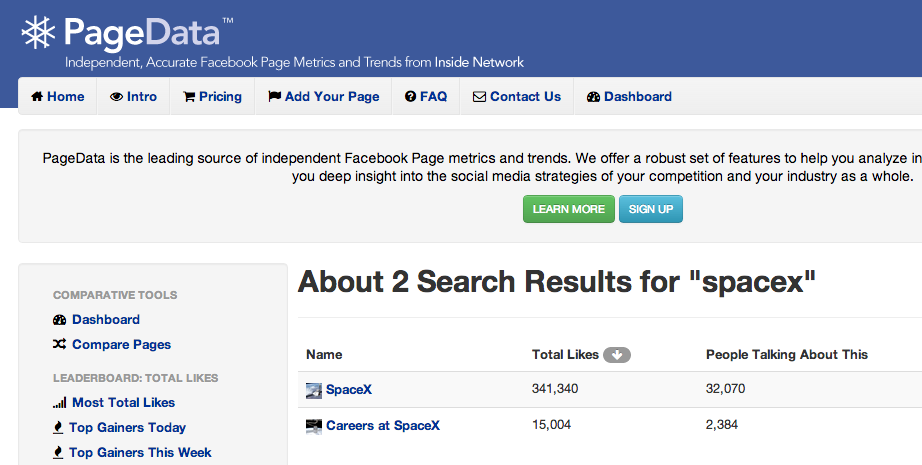 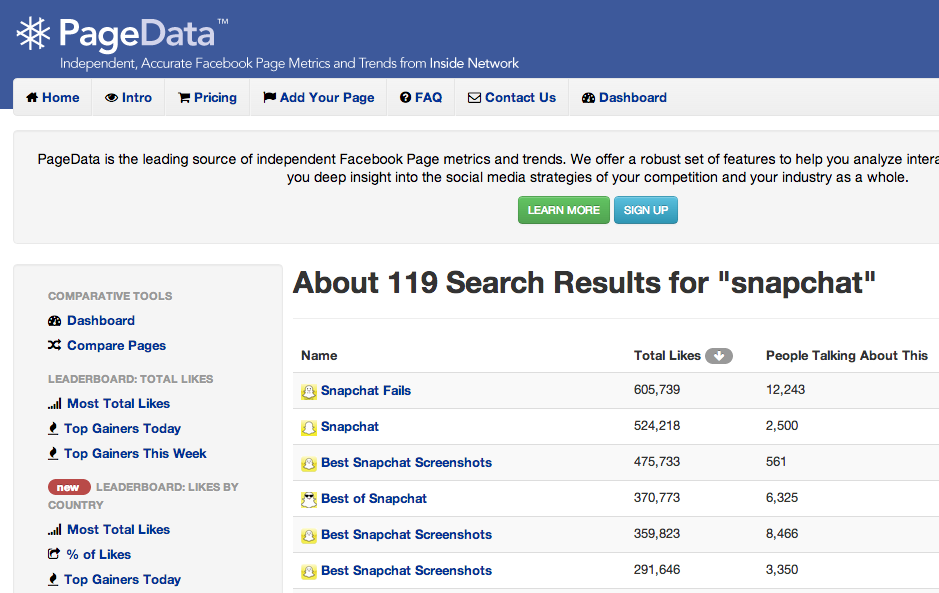 Google News turns up about 30,000 results for “Snapchat”. 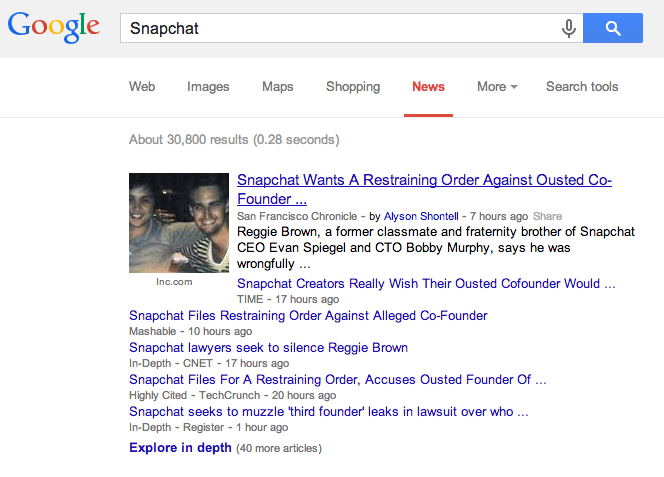 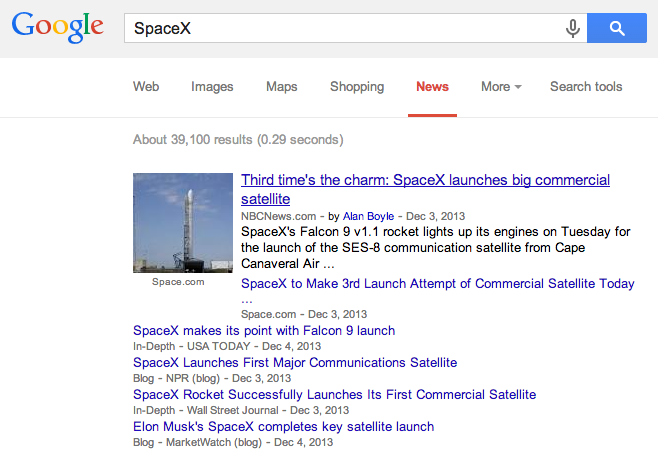 The Google News anomaly aside, it's clear that humans prefer to talk about Snapchat more than about Elon Musk's long-game effort to spread human consciousness to others parts of the universe.