The new television: How is NimbleTV different from Aereo?

This morning, Aereo CEO Chet Kanojia was in Baltimore to mark the TV-over-the-Internet service’s launch in the city, its 10th of 22 cities that it had planned to reach by the end of 2013. (Kanojia now says the company will hit that goal by early 2014.)

Kanojia’s appearance at Baltimore Tech Breakfast came a day after news that a competing service, NimbleTV, announced that it was now available to all-comers in New York after a year-long trial.

Both Aereo, which has raised $63 million in venture funding, and NimbleTV, which has raised $6 million, offer an alternative to the status quo, in which major over-the-air channels and cable channels have failed to deliver on their “TV Everywhere” promise. With their cloud services, Aereo and NimbleTV deliver channels and shows to various connected devices, including iPads, iPhones, Android devices, and desktop computers.

However, there are some key differences between the two companies, and each comes with its own set of problems. If you’re looking for a way to cut the cord without sacrificing your favorite channels, first take note of the following points.

Aereo’s focus, Kanojia said this morning, is on live and local. To operate in a city, it has to establish a data center there and build a rooftop structure to house its antenna technology. To get around the legal problem of sending broadcasters’ signals into people’s homes, it “rents” the use of its antennae to subscribers, who then get to watch the free-to-air channels on any of their devices – as long as they stay within their home area. If subscribers travel outside their home area, they can’t use the service.

NimbleTV, on the other hand, refers to itself as like “Slingbox without the box,” meaning you can watch TV using the service anywhere, even if it’s a cable package offered in a different part of the US than where you live. “One of the reasons why we’ve taken a long time to build this out is to make sure this is a global service,” CEO Anand Subramanian told Bloomberg TV yesterday. 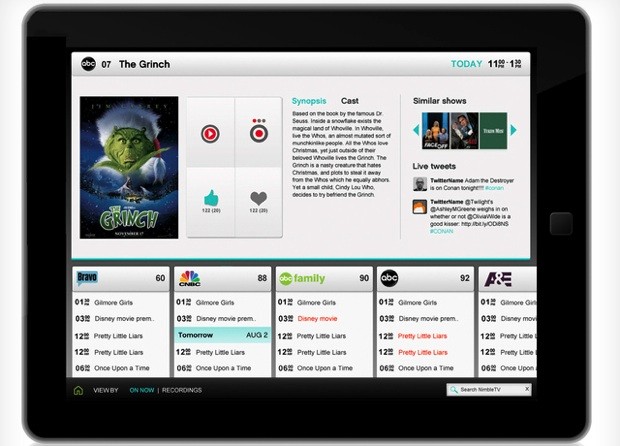 NimbleTV costs $4 a month – but there’s a huge BUT. To get the service, you have to also subscribe to a cable bundle. That bundle doesn’t have to be from your local area, however. At the moment, Nimble lets you sign up to the Dish Network, which offers a package that starts at about $30 a month, although that is not a formal partnership. In fact, during Nimble’s test run, Dish temporarily pulled the plug on the startup, apparently over concerns that Nimble risked misleading subscribers that the satellite TV service had a formal relationship with the Internet company.

So, to subscribe to Nimble, you’re looking at a minimum of $34 a month.

Aereo, meanwhile, costs $8 a month, and for that price you get 20 to 25 channels, including all the major broadcasters, such as CBS, ABC, Fox, and the likes. It also has a partnership with Bloomberg, which brings the news channel to the service. It does not have a comprehensive offering for cable channels, but Kanojia says it is building an “open platform” that can host all sorts of televised content. “Our ambition is to be the company that provides that open platform to both producers and consumers,” he said in an interview this morning.

Kanojia also said that he welcomes anybody who’s coming into the marketplace and trying to innovate, but that he sees Nimble as married to an old model. “I have a mission to create an alternative for consumers,” he said, “so I don’t view operating within the cable bundle model as ideal for consumers.”

AllThingsD’s Peter Kafka says he hasn’t found a programmer that is willing to say anything threatening about Nimble yet – perhaps because they’re already getting paid on account of Nimble’s model, which requires users to already be paying for a cable subscription. However, that doesn’t mean Nimble won’t end up in court. One possible sore point for cable providers is that people can now subscribe to packages from outside their home states. Cable providers do not like being unable to control the experience, or how they sell their packages.

Aereo, on the other hand, has some serious legal distractions, despite a series of court victories over angry broadcasters. The broadcasters are now petitioning the Supreme Court, complaining Aereo threatens their industry. It does – it’s just a question of whether or not it does so legally. One-time Pando contributor Farhad Manjoo has argued that Aereo is just exploiting a legal loophole. Kanojia flatly rejects that claim, saying: “[The broadcasters] broadcast for free for the consumer. The consumer has the ability and the right to put up an antenna.” The consumer then rents the antenna from Aereo.

Another commonality: Competition is coming

Aereo and NimbleTV might have an early lead on Web TV, but they won’t be alone for long. Even though they have been slow to move, broadcasters and cable providers aren’t going to take Aereo and Nimble sitting down. DirectTV, Time Warner Cable, and Charter Communications, for instance, are considering launching their own Aereo-like service. Aereo and Nimble also compete indirectly with on-demand services such as Hulu and Netflix, and (kind of, because it also works with them) plug-in services such as Roku, Apple TV, and Google’s Chromecast.