The newest climate change numbers are out and they're not good

Each year, the National Oceanic and Atmospheric Administration (NOAA) releases a report on the state of the world's climate. There's always a lot to pore through in these reports, but the big data point observers look for is the global average land and sea surface temperature on the year. It's hardly the only statistic that matters, but it provides a good snapshot of the global climate situation that's both visceral and easy-to-understand: Since global recordkeeping began in 1880, nine of the ten hottest years took place during the 21st century (the one outlier, 1998, is not far off).

At 0.62 degrees Celsius above the average, 2013 tied with 2003 as the 4th hottest year on record. While 0.62 may not sound very high, the Intergovernmental Panel of Climate Change says that, based on historical data, a 2 degree global temperature increase above the average could cause sea levels to rise 5-10 meters. Meanwhile, a increase of as low as 1 degree Celsius could put Greenland on an irreversible track to literally melt. 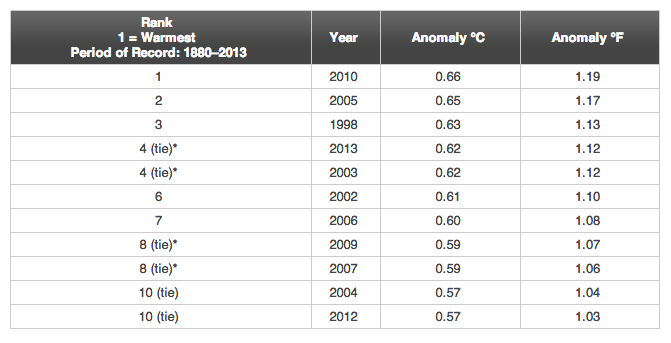 Slate's Phil Plait puts a fine point on it, asking, "Were you born after 1976? Then you’ve never experienced an average year: 2013 is the 37th year in a row with temperatures above the 20th century average."

Climate change deniers who, shockingly and depressingly, include people like James Inhofe who serve on the US Senate Environment and Public Works committee, like to say that hotter average temperatures are merely part of a natural cycle. Yet there's a strong correlation between atmospheric carbon dioxide (CO2) levels and temperature, and since the Industrial Revolution, atmospheric CO2 has skyrocketed.

Much of the imagery used to spur action on climate change involves polar bears standing on an ever-diminishing block of ice or black bears literally losing sleep. The impact will extend beyond furry animals and natural beauty, however. A European report commissioned by 20 countries and written by 50 scientists, economists, and policy experts estimates that climate change results in 400,000 deaths each year worldwide, due primarily to "hunger and communicable diseases that affect above all children in developing countries." The same report found that climate change costs the world $1.2 trillion a year, amounting to a 1.6% annual loss in global GDP.

Here at Pando, we talk a lot about the costs and viability of cleantech investments. But it's important to step back and look at what's at stake. Companies that can help reduce or remediate greenhouse gas emissions take a lot of money and a long time to build. And thanks to the short-term outlooks embraced by so many in the venture capital world, private investment may not the be the best (or at least not the only) approach for solving this problem. As the public health component of this crisis continues to escalate, we'll need the support of lawmakers, not just money managers.

Unfortunately for that to happen, public consensus will have to match scientific consensus: As of last November, 23 percent of Americans denied that climate change was happening, a 7 percentage point increase since the previous April. Meanwhile, 97 percent of atmospheric scientists say global temperatures have increased over the past 100 years. More education seems like the best solution, but a Yale study shows that opinions on climate change are shaped in large part by cultural values, and are often unrelated to scientific literacy.

That's right: It doesn't matter how many data points, including the one released today, you whip out at Thanksgiving dinner -- your Fox News-watching grandfather is still going to deny that global temperatures are on the rise.