Over the past few weeks, Google's private shuttle system, which uses public bus stops but is only available to those who work for Google, has been at the center of tensions between anti-displacement Bay Area activists and big tech firms. In December, the conflict escalated when protesters attacked a Google bus, smashing the rear window while employees were inside. Then last week, anonymous protesters targeted a well-known Google engineer, claiming to have staked out his home to watch his comings and goings.

The tensions have spilled over online too: At Salon, Natasha Lennard came out in defense of the most militant anti-Google activists, writing, "Intimidation tactics targeting the employees of major corporations are nothing new and have a history of success." Never mind that just because something "works" and is "nothing new," it is not therefore justified. Others like Pando's Paul Carr recognize that the protesters' grievances are legitimate, but that it's neither fair nor productive to take things out on mid- to low-level tech employees.

In some circles, the debate has begun to diverge to unhealthy extremes: On one side, there are activists who would show no remorse over seriously injuring someone in the name of anti-Google fervor. On the other side, there are tech workers or enthusiasts who show so little compassion for the very real poverty issues San Francisco faces that it almost makes you want to put them in a Google Bus and throw rocks at it.

So it's somewhat of a palate-cleanser to see visualizations like these made by Chris Walker, which eschew the rage or rhetoric that's come to dominate this debate in favor of data. Very pretty data.

Walker, a San Francisco-based data journalist who runs the site Datawovn, identified the locations of commuter shuttle stops used by the city's biggest tech companies and mapped these out against other urban data points, like rising property values and business distribution. As you can see below, the areas where property value has gone up most over the last two years are also host to the densest clusters of commuter bus stops. Each dot represents a property where the value went up 70 percent or more between 2011 and 2013. The brightest dots represent the biggest jumps in value. The gray pin-drops are the shuttle stops. 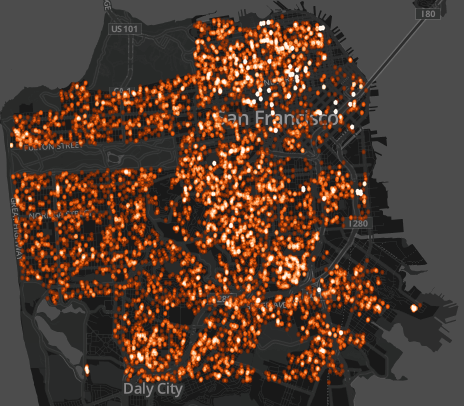 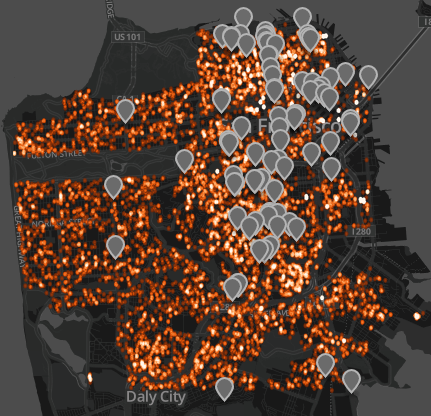 Walker also charted the locations of different businesses, including restaurants, bars, liquor stores, beauty salons, jewelry stores, and child care centers. For the most part, these businesses, like the Google stops, had their highest incidences in the same places where property values have gone up most.

One exception was child care centers, many of which were populated in areas where property values have not risen so quickly and where, judging by the shuttle bus locations, tech workers at big firms do not live. 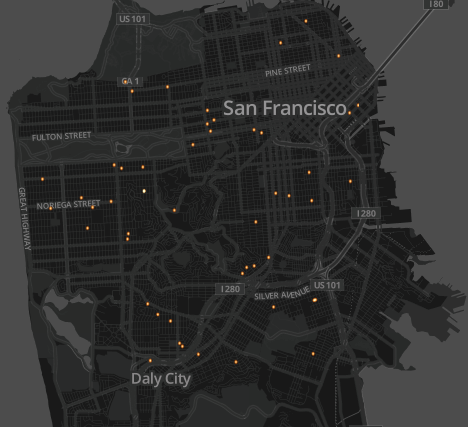 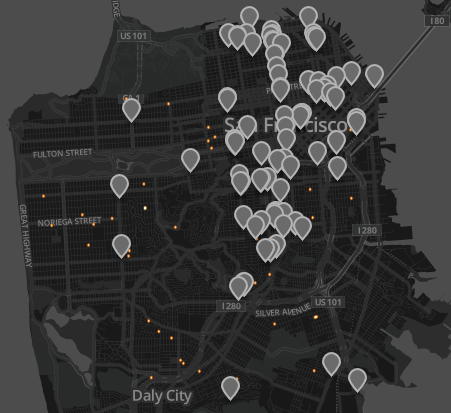 There are a few possible factors leading to this. One is that many of the new tech workers arriving in San Francisco are young and just starting their career. Therefore many may be single and/or without children. They're going to bars, liquor stores, and restaurants but not child care centers. Another possibility is that in less affluent households the pressures on both parents to work are greater.

None of the data here is too surprising: People who commute to places like Google, Yahoo, Apple, and eBay using private shuffles live in areas where property values have exploded over the past two years. These areas are also home to some of the highest concentrations of bars, liquor stores, and restaurants. Meanwhile beauty shops are scattered all over the city without much correlation to affluence, while child care centers are less likely to exist in the most affluent neighborhoods.

But while the data may not be surprising, it's an important starting point for the conversation, rooted in empirical data as opposed to emotion. This represents a correlation and not necessarily a causation. However, the correlation is so strong that it reveals why, fair or not, it's the bus-riding workers at places like Google and Apple that have become emblematic of ballooning rents, not the less-visible executives who run these companies.