Is paying for Super Bowl air time a waste of money? Here are some charts that explain.

As the Daily Mail's head of social media sagely pointed out, "The only people who 'won' the Super Bowl were the Seahawks." But that hasn't stopped reporters and analysts from proclaiming a Super Bowl victory for any number of brands that sought to dominate the conversation on Sunday and, in theory, get more people to buy their shit.

We can argue all day about the best Super Bowl ad. (Actually no we can't. It's this one.) But the researchers at Kontera looked closely at the data surrounding consumer sentiment to determine not only who, er, "most excelled" at Super Bowl marketing, but also what marketers can learn from it.

To begin, here were the top ten most "consumed" brands during Super Bowl XLVIII. (By consumption Kontera doesn't mean how many Doritos we ate, but how much consumer interest surrounded each brand online during the game). 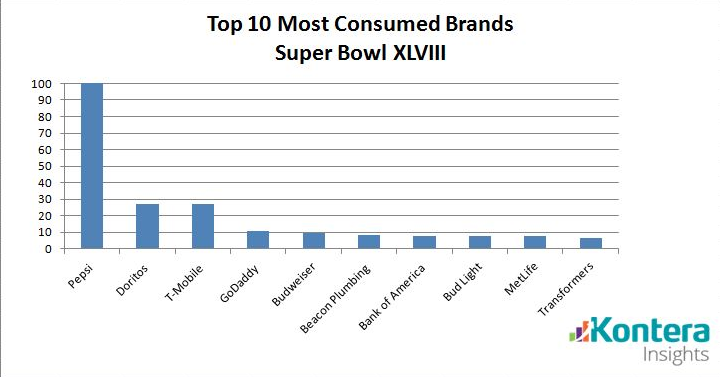 Kontera goes deeper with its analysis than merely naming winners and losers. It compared the strategies of two types of advertisers: Those that rely on a "big reveal" during the game, and those that rely on sustained marketing, posting their videos to social networks days before the game, and running these spots in tandem with other campaigns.

It may sound counterintuitive, but the brands that ran sustained campaigns received a greater bump in consumer interest on Super Bowl Sunday than brands that waited until game day to reveal their ad. It would appear that consumers are far more likely to respond to an ad if they've already seen it or heard their friends talking about it.

For example, here's a chart measuring consumer interest over the past four weeks for brands that relied on "big reveal" marketing:

With the exception of Dunkin Donuts and Chrysler, none of the brands received significant bumps on game day, calling into question the logic of spending millions on precious Super Bowl air time.

Now take a look at brands that ran sustained campaigns that took advantage of the web and social media leading up to the event:

These brands enjoyed huge surges on game day. Despite the fact that Budweiser published its  "Puppy Love" ad and its "A Hero's Welcome" ad days before the game, that only amplified their impact when people saw them yesterday. Anecdotally, when "Puppy Love" came on at the bar where I watched the game, I heard people say things like, "Oh I love this ad!" and "What, you haven't seen this yet?"

Finally, Kontera highlighted Skittles which, although it didn't spend a dime on Super Bowl air time, was the number five most talked-about food and beverage brand during the game. Why? Because Seattle Seahawks running back Marshawn Lynch likes Skittles so much that fans threw them on the field. Sure, paying for air time might have been a waste for Skittles. But not everyone has a brand ambassador who happens to be one of the most important figures at the event you're advertising against.

So no, paying for Super Bowl air time isn't necessarily a waste of money. But the notion that the best way to get people talking about your brand is through a big anticipated Super Bowl reveal has become yet another business maxim made obsolete by the Internet.