On October 21, 2004, I typed "thefacebook.com" into Internet Explorer and began my longest-standing relationship with an Internet product.

As a Junior at Ohio State University, I signed up shortly after Mark Zuckerberg expanded Facebook's availability to non-Ivy League schools, and at that point there wasn't much you could do with it. After building your profile, you could locate people in your school's network, become "friends," and privately message them. It was essentially like AOL Instant Messenger but with slightly better search and a more detailed profile. By far the most common use case in those early days was finding out if a girl or boy you met in class or at a party had declared themselves as "Single."

Fast-forward to today: We play games and consume videos on Facebook. We argue about politics, plan events, check into locations, purchase gifts, spy on our exes and crushes, post photos in real-time, make jokes, share stories, and call up old memories. We do it with old friends, new friends, family members, celebrities, and brands. And we do it everywhere we go from the palms of our hands, not just sitting at our desk at home or school or work. If something can't be done on Facebook, then it can sure as hell be shared on Facebook.

The real legacy of Zuckerberg's dorm room project isn't social media: Friendster predated it in existence and Myspace predated it in popularity. It's that so much of human experience is now filtered through apps or platforms, platforms that make the rules and change the rules whenever they like, in ways that often amplify the less savory elements of human nature while satisfying the whims of corporations.

How Facebook's design tweaks change the way we behave 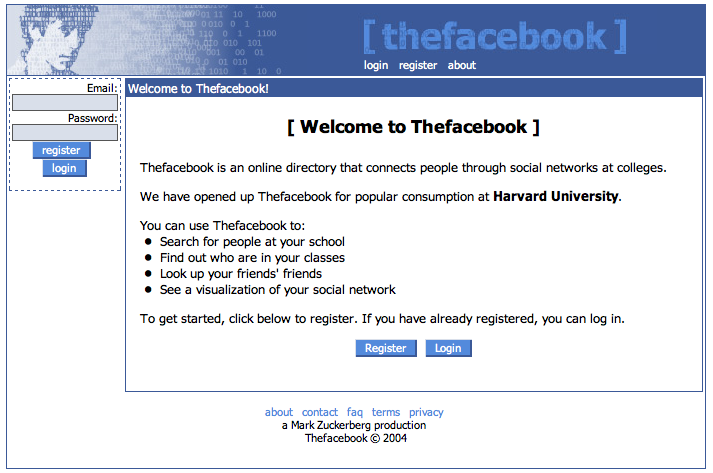 When Facebook changes its design or functionality, it's more than just a trivial product tweak. 669 million of Facebook's billion-plus users sign into Facebook every day, so a change to how the site looks or operates is literally a change to the daily routine of more than a half a billion people. For example, in 2004 the "Facebook Wall" didn't exist yet. If you wanted to contact someone on Facebook you sent a private message, which was no greater a cognitive leap for users than sending an email or IM. After the Wall debuted and users could post to one another's pages, it introduced a new type of communication: the online, non-anonymous public conversation.

This was more than a status update, away message, or anonymous comment thread. These were conversations that anyone in your network could see, attached to your name and photo.

In a lot of ways, stripping away anonymity from online public discourse is positive. It keeps people accountable for what they say. But it was also a profound extension of what we refer to now without batting an eye as an "online identity." Anyone can set up a public profile page and sound clever. Before Wall posts that's all Facebook was: a collection of profile pages. But while friends used to only see your carefully-crafted page, now they could listen in on your conversations.

The impact of Facebook's early changes wasn't felt by users until 2006 when Facebook made a historic blunder that, had Zuckerberg handled it different, could have been the company's undoing.

Without warning, Facebook launched the News Feed. Today, the News Feed is such an integral component of the product that it's hard to imagine Facebook without it, let alone people becoming irate about it. Suddenly all those status updates, life changes, and Wall posts were shoved to the front page. "John is no longer in a relationship with Mary." "Sam wrote 'fuck you' on Daisy's wall." "Daniel changed his profile from 'Interested in Women' to 'Interested in Men.'" Even though this information had always been public for anyone in a user's network to find, its sudden appearance on homepages felt like an invasion of privacy. Users were outraged.

Social media has always been at least a little about performance. But with the News Feed, Facebook offered users a bigger and more wide-reaching stage to perform on than ever before.

Luckily for the company, Mark Zuckerberg displayed no arrogance in apologizing to users, writing, "We really messed this one up," in an open letter. He promised and delivered on better privacy controls so users can control which posts will appear in News Feeds. But the irony is, with the exception of the privacy tweaks, Facebook didn't adapt to satisfy users -- users adapted to Facebook. The way people use Facebook today is more in line with the News Feed's original intent. People share cute pictures, inspiring stories or snarky jokes not so they'll show up on their profile page, but so they'll show up in people's News Feeds. We want a lot of people to see these posts so as many people like them as possible. Social media has always been at least a little about performance. But with the News Feed, Facebook offered users a bigger and more wide-reaching stage to perform on than ever before.

Facebook continued to evolve in 2009 when it invented the "Like," which has become the smallest unit of social interaction on the web. Less pregnant with potential meaning than the Twitter favorite, the "Like" invented a new form of social currency, a virtual nod of the head that lets someone know you're listening without expending the slightest effort. Which is nice, I suppose, but it's also nice to send a message or pick up the phone now and then.

The like and the notification form a hideous ouroboros of low-stakes recognition and validation that, if taken too seriously, amplify our insecurities and our egos in equal measure.

Other design tweaks are more subtle, but no less influential on user behavior. In 2010, Facebook added notification alerts to browser tabs, which basically streamlined the art of "fucking around on Facebook at work." Now you could keep the Facebook browser tab open but off to the side of whatever you're working on, and click only when you see that little parenthetical number pop up.

Why are notifications so important to Facebook? Because just as the "Like" button is the minimum viable social interaction, a notification is the minimum viable validation that what you do on Facebook matters. Someone is listening. Someone mentioned you, or commented on a post, or invited you somewhere. You matter! The like and the notification form a hideous ouroboros of low-stakes recognition and validation that, if taken too seriously, amplify our insecurities and our egos in equal measure.

The goal behind each one of Facebook's design tweaks is fairly obvious: To get us to do more and share more on Facebook. The company reaped $2.33 billion off advertising in the last three months alone, with $1.24 billion of that from mobile. The more you share on Facebook, the more the company knows about you, allowing it to better serve its highly lucrative advertising partners.

Some call that "for profit surveillance," others call it "business as usual." But ethics aside, there's something troubling about how Facebook and other consumer-facing platforms create psychological incentives to funnel more and more of our experiences through their service. We become conditioned to the platform so when it changes the rules, we change our behavior. And if Facebook tries to censor you in a way that's not consistent with its policies like it did to David Sirota, then sure you can quit Facebook but then how will know about your friends' parties? And birthdays? What about the "likes"?

In thinking about how Facebook has altered our world in the past 10 years, I keep coming back to the amazing British science fiction show "Black Mirror." It depicts not-so-distant future worlds where practically every human interaction is filtered through the interface of an app or platform. Screens line the walls of every room, serving up ads that can only be shut off by paying "credits" (the screen knows if you shut your eyes or cover your ears). Your every move, even the most intimate sexual act, is monitored under the assumption that bringing technology everywhere you go undoubtedly makes your life better. (If you think that's far-fetched, look no further than this Google Glass sex app).

One episode even features a service that will create a robot of your dead loved one with a personality based on all the tweets and Facebook posts she ever sent. The result is as frightening as you'd expect, which emphasizes the dangers of putting too much stock into your "online identity."

Should you quit Facebook? If you want, but it could also be healthy to simply take time off. A week. A month. Something to cleanse the palette and remind you that not every activity has to be shared or filtered through Facebook (or Twitter or Instagram or Tumblr for that matter).

Because the more you fit your life into what a for-profit ad-supported corporation like Facebook expects of you, the less power you have over your identity and experiences.