Can HLN get millennials to watch cable news? We look to the data to find out

Millennials: Depending who you ask they're either the most spoiled generation ever or even more hardworking than their parents. They're either frivolous, impulsive materialists or the thriftiest group since the Depression Era. But whatever easy generalization you make about millennials, one stereotype is hard to deny: They hate cable news.

In 2012, only 23 percent of viewers aged 18-29 said they regularly watched cable news. And 34 percent of 18-34 year olds watches virtually no television broadcasts at all. 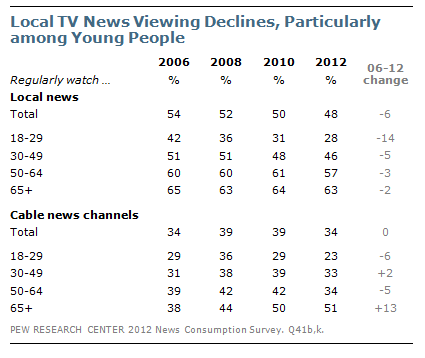 In an interview published today with Buzzfeed, Hecht explains the network's new goal: To become the cable news network for "the social media generation."

“There is no one place someplace where all of this news that you share on the web is available,” Hecht told Buzzfeed's Peter Lauria. “By giving it a home, and saying clearly to the social media generation that this is for you, come here, when you watch TV, watch us, I think that’s going to be a very exciting development for them and for the media.”

Can this possibly work? Can the network most famous for Nancy "#MurderForPizza" Grace get millennials to watch in droves?

Hecht says there's "no one place" where viral news goes, but what he really means is there's no one place on television for it. According to research conducted by the New York Times, most users (63 percent) go straight to video hosting sites like YouTube to consume online videos. Almost half of the users (44 percent) watch online videos on social networks like Facebook, while only 28 percent watch them on news sites. When it comes to finding cool videos, users of all ages trust the judgment of YouTube's algorithms and their friends more than they trust journalists. 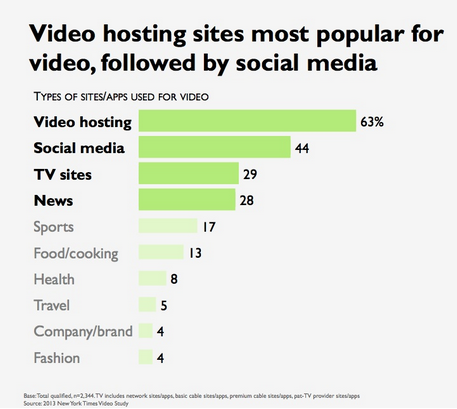 Nor is this the first time a TV network has courted the elusive millennial market. Al Gore's Current TV targeted 18-34 year-olds “who want to learn about the world in a voice they recognize and a view they recognize as their own.” Despite predicting some interesting trends in media, however, Current TV never picked up steam with audiences. Al Jazeera America eventually bought the network for $500 million, not for its brand but so it could make its way into US living rooms.

Of course Hecht's strategy is much different than Current TV's, focusing less on original and investigative journalism and more on what HLN calls "‘must-see, must-share’ stories of the day," whether that means an adorable cat video or crazy post-apocalyptic photos from protests in Ukraine. Hecht also says HLN's programming will include game shows and episodic series shows.

It may not bode well for the future of smart, important journalism on TV, but HLN is smart to focus more on entertainment than depth. According to that same New York Times study, users consume news video when they want to be entertained, not when they want to want clarity or the full story. 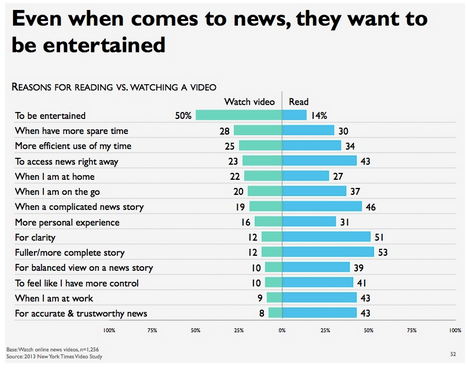 So the best way for HLN to succeed as a news station for millennials is to not be very newsy at all. Of course, Jeff Zucker the president of HLN's parent company CNN wants to "broaden the definition of news" but I'd prefer to call HLN's vision something different. "Current events entertainment?" "Tosh.24/7"?

One of HLN's potential tag lines, Buzzfeed reports, is “We’re not the news, you are.” Let me to suggest another: "It's not news. It's HLN."