Whatever happened to broadband competition?

My mom is as sweet and easygoing as they come, but there is one word that can get her Irish blood boiling: Comcast. For the sake of her blood pressure, I try not to utter it when I'm around her, yet every time I visit her one or another of the Comcast boxes in her place is on the fritz.

Once, after an hour-long phone session and a series of tests that concluded that either 1) my mom's set-top box was working, maybe; or 2) her set-top box was broken, probably; I drove to a Comcast store for a replacement. The long lines I'd heard horror stories about weren't, weirdly, there. I felt an emotion rare among Comcast customers: a sense that things were going my way.

The emotion proved fleeting. As I walked up to the counter, the burly, bearded guy behind it yelled at me that I couldn't do that, that I had to take a number first. Taken aback, I complied. I took a number and as I waited I looked around at the otherwise deserted space and felt like an idiot. Then the burly, bearded guy called out my number and cheerfully exchanged the set-top box for one that would stop working a few months later.

As Comcast stories go, this is pretty mild. I'd probably have bigger gripes had I not cut the cable cord in my house in 1995. Today - as the world digests news that Comcast will pay $45 billion for Time Warner Cable in its quest to combine terrible customer service with really, really horrible customer service – it's notable that hardly anyone outside of Comcast and TWC is excited about this deal.

For the rest of the country, the news of the deal is an occasion for a collective catharsis for anger, frustration, resentment and eventually resignation that the lack of competition not just in cable, but in broadband Internet and wireless service as well, will erode the Internet for consumers and many businesses even as it becomes more expensive to use. Comcast may describe the deal about cable TV but others like Om Malik see it as all about broadband access, and he's absolutely right.

Much of the conversation concerning the Comcast-TWC deal centers on the question of monopoly. Some argue that the merger won't reduce choice in markets where little exists to begin with. This is true enough, but only partly. Cable companies and ISPs have long been settled into segmented markets, leaving little geographic overlap between, say, Comcast and Time Warner Cable. Consolidation is happening in broadband and cable the way it did in power and phone utilities a couple of decades ago.

But if, as Malik says, the future is in broadband , consolidation is a very different game. Comcast doesn't just offer cable TV and broadband, it lobbies politicians, negotiates with content providers like Netflix and YouTube, and bullies peering agreements with other data networks like Level 3. Comcast isn't just buying TWC for economies of scale, it's buying a considerable amount of new leverage in DC and against Netflix, Level 3 and others.

In the US, the last mile of the Internet – at once its most ubiquitous and least sophisticated mile, the one in need of the biggest upgrades, and the one firmly controlled by companies like Comcast and AT&T – is not seen as an area of investment by big ISPs, but as a cheap asset worth owning. Because as long as nobody else is willing to upgrade last-mile connections installed long ago (in other words, as long as there's no true competition), big ISPs can push against everyone – consumers, regulators, backbone providers, video purveyors. 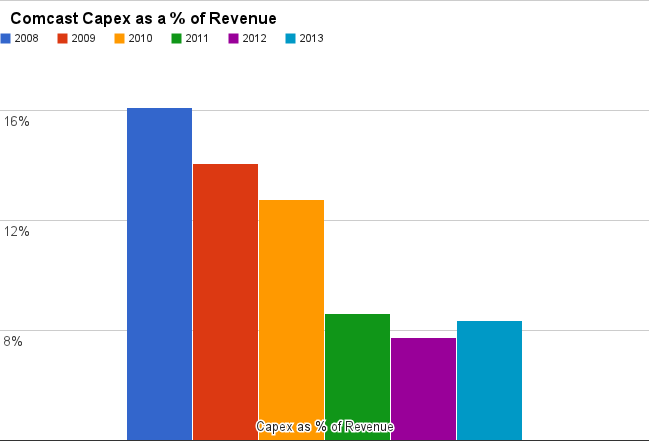 For evidence, look at Comcast's SEC filings. The company has boasted of rising revenue, not to mention rising revenue per customer. But at the same time, it's spending less on building infrastructure for its subscribers. The chart above shows Comcast's capital expenditures falling from 16.1 percent of revenue in 2009 to 7.7 percent in 2012. It ticked up to 8.4 percent last year, but not because of networks, but because of “investment at our Universal theme parks.” Because Comcast loves to take its customers for a ride.

The weary outrage directed against Comcast and TWC has less to do with the transaction itself than what it represents: As worrisome as the proposed deal is, it's just another brick in the wall (side note: click on this link to complete the Ouroboros of irony). Even if regulators nix it, Comcast will simply lose a battle in a war it's been winning for years. Competition is lacking in cable, broadband and wireless not by accident, but by design.

In a piece for Bloomberg, Susan Crawford, a visiting professor at Harvard and shrewd gadfly ot the telecom industry wrote, “The reason this deal is scary is that for the vast majority of businesses in 19 of the 20 largest metropolitan areas in the country, their only choice for a high-capacity wired connection will be Comcast.” In other words, Comcast is a company thriving not because of free markets, but because of throttling them.

Last year, Crawford wrote a book called Captive Audience that offered succor to digital consumers even as it riled up industry defenders (read the Amazon reviews for a taste of the ambivalence it stirred). On its release, Time's Sam Gustin did a nice summary of Crawford's views, including this quote from her book:

Instead of ensuring that everyone in America can compete in a global economy, instead of narrowing the divide between rich and poor, instead of supporting competitive free markets for American inventions that use information — instead, that is, of ensuring that America will lead the world in the information age - US politicians have chosen to keep Comcast and its fellow giants happy.

This quote hit home for me not just as another frustrated subscriber, but because the “instead of”'s Crawford describes are aligned with the better goals of the technology industry right now. A faster, cheaper, less controlled Internet infrastructure doesn't just benefit the sad population that will be binge-viewing House of Cards S02 tomorrow. It is crucial to the success of businesses that rely of a fast, cheap and uncontrolled Internet to succeed – whether they are in established industries like film or as-yet-unrealized business models whose lifebood is bandwidth.

This is the irony of Comcast, TWC and their last-mile pipe hoarders. They are pleasing their shareholders quarter after quarter. In the past four years, the Dow Jones Industrial Average is up 54 percent. Time Warner Cable is up 188 percent (excluding today's rally) and Comcast is up 245 percent. Investing less in customers while extracting more money from them, it seems, is a big business. As long as there's nobody around to undercut you with competition.

In a market where others are allowed in, the first thing competitors will do is appeal to the customer. In the tech industry, we've seen this again and again. Salesforce undercutting Oracle with cheaper on-demand wares. Google going after Microsoft with a free version of Office. Even T-Mobile (after the AT&T deal was shut down) is challenging rivals with cheaper, if spotty, service.

What we're not seeing in the industry that builds and maintains the infrastructure that connects hundreds of millions of people and businesses with the content and services they seek is a similar spirit of disruption. Comcast is what happens when you wall yourself off from disruption.

Yes, there's Google Fiber. And Comcast is arguing that Fiber is a reason to approve its proposed merger with TWC. Which is laughable. Fiber is making a huge difference in a tiny percentage of US broadband markets. For several years to come, even Google will lack the wherewithal to challenge Comcast and TWC on any significant scale. Google Fiber, by its own admission, is a beta project.

And besides, Google is already a little too intimate with our lives. Do you really want to hand over your digital life to the search engine that manages your email (while sniffing its verbiage to target ads) and streams Internet TV to your high-def set, and handles your company's apps... and manages the bandwidth that shuffles it all along your last mile? Google has tried to win its users trust in an age of data snooping, but that's a lot of trust.

Sadly, the best hope I can see is the same kind of government that Crawford blasted for coddling the telecom incumbents. Some cities like Chattanooga have been trying to build high-bandwidth networks. Other cities have had to fight giants like, yes, Comcast, to do the same. Still others have succombed to lobbying of state legislators to bar municipalities from building last-mile fiber-optic connections the way communities used to build sewage systems to each household.

Some people argue that broadband Internet isn't a utility. But that clashes with the argument that Comcast buying TWC isn't a monopoly because they have this utitlity-like balkanization of geographic markets. You can't have it both ways. It's a utility if it provides the majority of people a quality of life, not to mention the companies offering them a better quality of life. If anyone thinks that broadband is less important than electricity, they are right. But they are right only in the past tense. The next 20 years will challenge their complacency.

Let's go back to that Comcast store, where the burly, bearded guy provided me with customer service that was, well... Comcastic. As I sat there waiting stupidly for my number to be called, I had a thought: There are two kinds of companies. One tries to bend over backward to please all customers, the other bends to please itself. Comcast, AT&T and others are in the latter camp.

They do what works for them. In a way, I understand. They have chosen to answer to shareholders over customers. Some corporate charters demand just that. But such demands overlook the long-term potential of the Internet. Anyone who has spent time in the Internet industry knows that following the desires of your customers – call them clients, call them users, call them consumers – is the recipe of success.

At the end of the day, I honestly don't care whether the Comcast/TWC marriage happens. The outcome will be the same. The shitty Internet experience that both have contribute to – the endlessly buffering videos, the sad spectacle of tens of millions of consumers jumping through humiliating hoops, the rising prices for said privileges – will prompt an alternative in the next few years.

If we're unlucky, it will be Google. If we're lucky, Google Fiber will be the spark igniting a multitude of innovators – in startups and, yes, in municipalities – to break the last-mile bottleneck of Internet access. The last mile is exactly where competition is needed. And innovation. Because the alternative is a world where Comcast wins: where the customer's behavior stops being a force shaping the Internet, and becomes instead another cheap asset to exploit.