Flurry reports that, more than ever, consumers are using applications that allow them to change Android's looks, commonly known as "launchers." Use of these apps almost tripled between the third and fourth quarters of 2013; it more than doubled again between the end of 2013 and the first quarter of 2014. 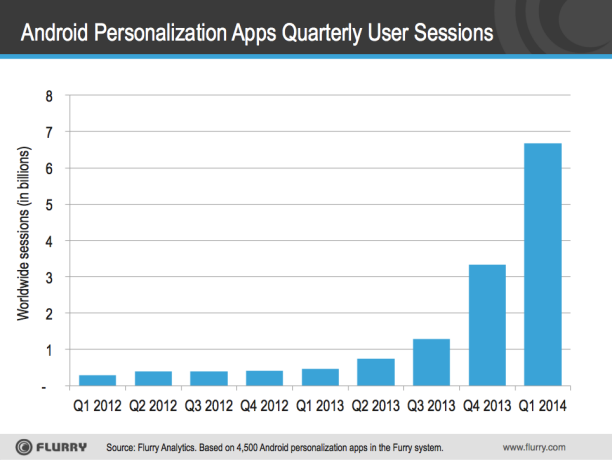 That consumer growth follows an increase in attention from tech companies: Facebook announced its Home launcher in April 2013; Yahoo acquired the Aviate launcher in January; and even Google is expected to release its own launcher through the Google Search app. Essentially, some of the world's largest tech companies are becoming digital lipstick-makers.

Flurry says in its blog post that there are some 4,500 personalization apps in the Play Store. "The majority of these apps offer a personalized homepage for Android," Flurry writes, "and do some form of app discovery and app launch." This means that gussying up Android isn't the sole province of large companies -- it's a burgeoning category for indie developers, too.

Most of these apps don't change Android's capabilities. They replace graphical elements, like the lock screen or notification bar, and focus on the things consumers do with their smartphones, like browsing Facebook or using work-related apps. According to Flurry, that's exactly what more and more consumers want:

[W]hat is most significant about what Facebook announced yesterday is that this is not the company that went public nearly a year ago with no compelling sense how to make money on mobile devices. This is now a company that will do whatever it takes, however long it takes, to remain relevant in mobile. This is Facebook’s return as a strong contender in the race to reshape how we use the Web.

In a year or two, Facebook Home will have evolved into something very different from what was announced yesterday. It may not be called Home, it may even have evolved into Facebook’s own mobile operating system. But Facebook clearly recognizes what is apparent to any company selling smartphones and to many users as well: The mobile phone of 2013 has hit a period of stagnation in terms of innovation. And it’s just a matter of time before someone boldly rethinks how we use the mobile Web.

I wrote about Home's status as a brazen call-out from Facebook to Google, which many of these apps are making themselves:

Facebook has taken advantage of Google’s 'open' parade and is convinced that it won’t suddenly change its tune. Sure, Google built Android, and yeah, Facebook is using a competitor’s platform to build a major new product, but that doesn’t matter, right? Open’s open, and Facebook seems to think that Android will never be shut.

Aviate co-founder Paul Montoy-Wilson described the rise of launchers and inter-app communication to me in October:

'Search is evolving. On the Web the keyword ruled the day. As we move to phones and think about how search continues to evolve, we have a strong belief that context is going to be the future of search.'

Pando's James Robinson wrote on Wednesday that the renewed focus on apps and the app ecosystem, as Flurry describes in its blog post, is killing the Internet as we know it:

This shift to apps and the splintering of our Internet experience across tablets, phones and computers, puts even more power into the hands of Apple, Google, and Facebook. From a marketing standpoint, selling the ads that so often fuel technical innovation, third party companies know we’re browsing the Internet on different gadgets, but have a fragmented, piecemeal idea of our user patterns, with a lot of this guessed at through statistical modeling. The concept of trying to retarget users between different apps is in its infancy.

All the while, Apple, Google and Facebook have a seamless picture of where we are, what we’re doing and who we know. Device pairing — matching us by the services we log in to across all the platforms we use — is the only foolproof way for a company to look at our true digital footprint. All three of these companies make it intuitive for us to always be logged in.

[Image via Pearls of Profundity]