Whisper raises $30 million to chase growth. Can it maintain its standards on the way up?

Late last night, Re/Code reported that the anonymous secrets-sharing app Whisper had raised another $30 million in a round led by Shasta Ventures. That brings its total funding to $54 million and its valuation to a reported $200 million, up from $76 million. If that sounds outrageous, keep in mind that Whisper, which is hugely popular among high school and college students, claims over 3 billion pageviews a month. New York Magazine's Kevin Roose points out that's more traffic than LinkedIn, Upworthy, and WordPress combined. (Though because a Whisper post is just a picture and a few words, it's probably more appropriate to compare to, say, Snapchat, which shares more than 400 million snaps a day).

The mechanics of Whisper are simple: Users share one-to-two line status updates overlaid over images and "heart" others' Whispers to show their appreciation. Examples include personal secrets ("Nobody at work knows I'm a lesbian and live with my girlfriend..."), inspiring stories ("I work in Hospice. Sometimes I stay hours after my shift if someone is close to dying to make sure they don't die alone."), and confessions of guilt ("All my friends think my art is amazing, but really it's all traced then strategically rearranged to look good.")

There's something massively appealing about anonymous apps like Whisper (and Secret) which strip away the vanity and narcissism and "brand-building" we see on Facebook and Twitter. Whisper encourages creation over consumption by removing the pretense for cleverness. It lets you dance like no one's watching while still feeling connected.

The problem with Whisper, and the reason I'm troubled by its massive funding round and bloated valuation, is the question of how the company plans to make money in order to justify it, and what that means for its community and maybe civilization as we know it. By hiring big names in editorial, like Gawker's talented traffic-driving blogger Neetzan Zimmerman, Whisper has positioned itself as a content company, sharing and repurposing what it deems the "best" posts. That's just fine for funny one-liners or shocking tales of perversion. But what happens when the posts are more incriminating? Last month, Whisper tweeted out a post from the app claiming that Gwyneth Paltrow was cheating on Chris Martin. 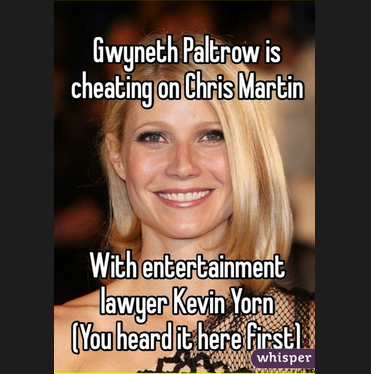 "You heard it here first." It looks like news, it sounds like news, and because it involves sex and celebrities people will click on it. But it also comes from an anonymous, invisible source offering no proof of authority or trustworthiness. Could it be a lead for an eventual news story? Maybe. But it is not, as Zimmerman put in a tweet, a "scoop." And while I'm sure a celebrity like Paltrow is no stranger to unsupported claims (she's denied the affair, by the way), what happens when the stakes are higher and the victims aren't public figures? What if, in the wake of a terrorist attack, a Whisper user falsely accuses someone of being behind it, resulting in a witch hunt? The accuser's intentions may even be good; you know, Reddit never intended to identify the wrong man in the wake of the Boston bombing.

Whisper CEO Michael Heyward told Business Insider these public accusations won't happen to people unless they are public figure. "We have, (and always will have) a zero tolerance policy towards bullying and personal defamation on Whisper. That said, we have always allowed honest and open discussion as it relates to public figures or other entities in the public domain. Our policies around moderation will never change and are in place to make sure that no user ever feels hurt by the actions of another user on the service."

Indeed, with the exception of the Paltrow post, Whisper's moderation and curation has been very good. And there is a good-willed community on Whisper that seeks to stamp out bad actors. But can good will scale? Despite what Heyward says, I don't think I'm being cynical to worry that some of those moderation policies may fall by the wayside as Whisper continues to grow and is forced to monetize. After all, even decades-old magazines sacrifice integrity in favor of pageviews. And when a non-public figure is accused of a very public act, what's to stop Whisper from broadcasting this information in the interest of "news"?

Whisper posts could ruin lives one unlucky suspect at a time, or they may lead to a far more widespread insidiousness. The Awl's Choire Sicha takes Whisper to its logical dystopian end, writing, "It's not hard to track and organize the proper nouns or tags in submissions to those apps. Their work as data collection, not just broadcast, is their future. It's a hop and a skip to have an anonymously sourced database of reputation."

That's right: You could lose out on a job or a date because someone with no authority said something awful about you on an anonymous network. And while in some cases this could be an agent for good, a kind of truth- and transparency-machine that brings hidden villains to justice, it could also be an agent for lies, out-of-context truths and jumped-to conclusions.

As a network for confessionals, and assuming the best when it comes to anti-bullying moderation, Whisper is a valuable source of entertainment and catharsis. But we live in a world where every tech company wants to become a billion-dollar endeavor, and with $30 million more in the bank, Whisper is definitely pushing to go big. To get there, however, it takes some serious leveraging of the data and content your users provide. And for a platform that encourages the dissemination of deep, dark secrets by anonymous voices, that leveraging could cause some serious collateral damage.