In early March, 2007, as Google was expanding fast and furiously, one of its recruiters from the “Google.com Engineering” group made a career-ending mistake: She cold-contacted an Apple engineer by email, violating the secret and illegal non-solicitation compact that her boss, Eric Schmidt, had agreed with Apple’s Steve Jobs.

What happened next is just one of many specific examples of how people’s lives were impacted by the Techtopus wage-theft cartel that was taken down by the Department of Justice antitrust division, and is currently being litigated in a landmark class action lawsuit.

The Google recruiter’s email—in which she identified herself as “a Recruiter for the ‘Google.com Engineering’ team formerly known as the ‘Site Reliability Engineering’ team”— was sent out on the morning of March 7, 2007.

That evening, Steve Jobs forwarded her email to Eric Schmidt with this note:

I would be very pleased if your recruiting department would stop doing this.

I believe we have a policy of no recruiting from Apple and this is a direct inbound request. Can you get this stopped and let me know why this is happening? I will need to send a response back to Apple quickly so please let me know as soon as you can.

Google’s Senior Staffing Strategist Arnnon Geshuri (now at Tesla) replied almost immediately, assuring Schmidt that the recruiter would be fired, and that Google HR did all it could to make sure that its recruiters were aware of the illegal non-solicitation agreements. The language is brutal, and as you’ll see, there’s an almost sadistic, military glee on all sides with the way in which the Google recruiter is “terminated”:

On this specific case, the sourcer who contacted this Apple employee should not have and will be terminated within the hour. We are scrubbing the sourcer’s records to ensure she did not contact anyone else.

In general, we have a very clear ‘do not call’ policy (attached) that is given to every staffing professional and I reiterate this message in ongoing communications and staffing meetings. Unfortunately, every six months or so someone makes an error in judgment, and for this type of violation we terminate their relationship with Google.

Please extend my apologies as appropriate to Steve Jobs. This was an isolated incident and we will be very careful to make sure this does not happen again.

Apologizing and groveling to Steve Jobs is a recurring theme throughout these court dockets... as is the total disregard for all of the not-Steve Jobs names whose lives and fates are so casually dispatched with, like henchmen in a Hollywood film.

Geshuri’s decision to “terminate within the hour” the recruiter was enthusiastically seconded by Google’s VP for Human Resources, Shona Brown:

Appropriate response. Please make a public example of this termination within the group. Please also make it a very strong part of new hire training for the group. I want it clear that we have a zero-tolerance policy for violating our policies. This should (hopefully) prevent future occurrences.

But in the back-and-forth involving this illegal arrangement, nothing summed up the contempt the executives in the wage-theft cartel had for those lower down than Steve Jobs’ response to this episode, in an email that was unsealed last week by Federal Judge Lucy Koh. (That email is embedded below, along with the other emails in the thread.)

On the morning of March 9, 2007—exactly 48 hours after Google’s recruiter sent her career-killing email to the Apple engineer — Schmidt emailed Steve Jobs to assure him that his needs were being taken care of:

Steve, as a followup we investigated the recruiter’s actions and she violated our policies. Apologies again on this and I’m including a portion of the email I received from our head of recruiting [Arnnon Geshuri—M.A.]. Should this ever happen again please let me know immediately and we will handle. Thanks !! Eric

An hour later, Jobs forwarded Eric Schmidt’s email to Apple’s head of HR, Danielle Lambert, with a simple, but brutal, two character response to news that a Google employee had been summarily fired. 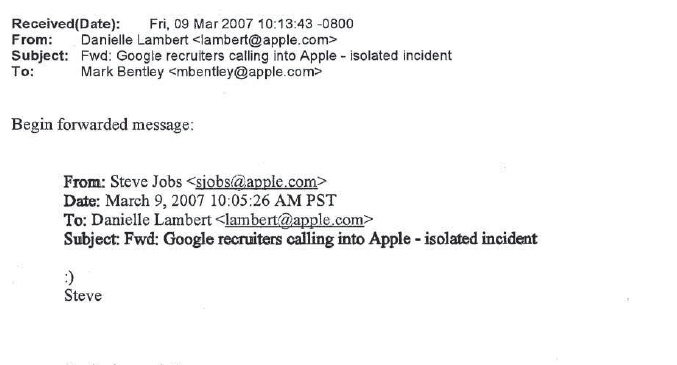 During a deposition last year, the plaintiff’s attorney for the Silicon Valley wage theft class action lawsuit asked Sergey Brin, Google’s co-founder, about this incident and others.

Under questioning, Brin alternated between cocky nonchalance, and sudden bouts of convenient forgetfulness.

[Heimann]: So the question is this. I had asked you earlier about whether or not Google enforced the policy, and with respect to these documents, these appear to be instances – this appears to be at least an instance in which Mr. Jobs complained about what he thought was recruiting going on on Google’s part among Apple, or Apple employees, right?

[Heimann]: So the question is, were you made aware of these kinds of complaints when they came in?

[Brin]: Well, I am on the cc line of this particular email, so you know, I don’t really recall it, to be honest with you, nor have a recollection of it at all. But somebody thought to copy me, it looks like.

[Heimann]: But I’m gathering from your answer that you don’t really recall this at all.

[Brin]: No, sorry. At this point in the deposition, Heimann shows Brin the March 9, 2007 email from Eric Schmidt to Steve Jobs, assuring Jobs that the Google recruiter Jobs complained about had been summarily fired, and that it won’t happen again.

Brin too was shocked at Jobs' response. But possibly not for the reason you'd expect:

[Brin]: Wow, Steve used a smiley. God, I never got one of those.

Update: More Steve Jobs emails reveal how he prevented Google from opening an office in Paris.

Pando attempted to reach Arnnon Geshuri via Tesla but the company declined comment. An email to Shona Brown  [2+hrs ago] had not received a response by press time. We will update this story with any subsequent comment we receive.

Correction: An earlier version of this article gave the wrong title for Judge Lucy Koh.