For all the emphasis placed on clean energy, you might expect that a significant dent's been made in humanity's carbon dioxide emissions -- emissions that are directly linked to warming temperatures on Earth, according to the overwhelming majority of climate scientists.

Quite the opposite: For yet another year, CO2 emissions hit record highs in 2013, contributing to it becoming the fourth-hottest year on record. Glen Peters, a researcher at the Center for International Climate and Environmental Research in Oslo, explained the disparity between awareness and action: "While society is seeing many positive developments in renewable energy, this increased production capacity is not simply displacing coal consumption."

Until governments enact carbon taxes and other significant reforms, concerned citizens will continue to look to private enterprises to provide solutions. But despite startups' capacity for innovation, cleantech hasn't been the world-changing sector many had hoped. Cleantech investment is down for the second straight year, not because investors don't care, but because clean energy technology is often extremely expensive and meaningful returns are difficult to achieve. Granted, experts attribute at least part of this drop to the falling costs of solar panels in Europe. And some firms like Khosla Ventures are as bullish as ever. Nevertheless, investor confidence in the sector has waned since its peak in 2008. Sarah Lacy and Michael Carney cited cleantech investment as the dominant factor leading to legendary VC firm Kleiner Perkins' fall from grace.

But a company like San Francisco's Ohmconnect proves that not every cleantech business model requires a huge amount of capital to get off the ground. The potential success of Ohmconnect's model lies in three simple facts: It zeroes in on a very specific problem -- that is, cutting down California's reliance on wasteful "peaking power plants" --, it provides direct financial incentives for its users, and it utilizes a software solution in lieu of expensive hardware like many other cleantech startups. "The vast majority of cleantech investments deal in hardware," co-founder and CMO Curtis Tongue says. "It's a very capital intensive industry. Our key advantage is that we're a software platform."

Here's how Ohmconnect works: To keep smart grids efficient, power companies pump just enough electricity into the system to meet what it predicts customers will need. It makes these predictions based on energy usage during the previous 45 days, but they aren't always accurate. If an unexpected heat wave causes a spike in air conditioning use, for example, the grid will tap into so-called "peaker plants," which essentially operate as back-up energy sources to meet demand.

Because these plants only operate for short periods of time, however, they aren't built with the same efficiency standards as most power plants. For that reason, energy from these sources is expensive, and dipping into them for excess power is bad for energy prices and bad for the environment. To give an idea of how much waste is involved when peaker plants are in use, Tongue sent me this graph provided by California's Independent System Operator showing the retail price of electricity set by PG&E and the actual price when usage spikes:

That's where Ohmconnect comes in. Its software platform alerts customers during periods of peak usage and advises them to cut down on energy consumption for a time-frame as brief as fifteen minutes to a half-hour. Ohmconnect then sells these reductions on the energy market, takes a twenty percent commission, and passes the rest along to customers. The company promises payments of up to $130 a year per customer.

That may not sound like a lot, but Tongue emphasizes that most energy-saving solutions merely offer to reduce your electric bill, which is a vague promise at best. "One of the key points to clarify is that these are earnings. We're paying people to reduce their consumption." As icing on the cake, the platform shows users their home's carbon footprint and where their energy comes from. 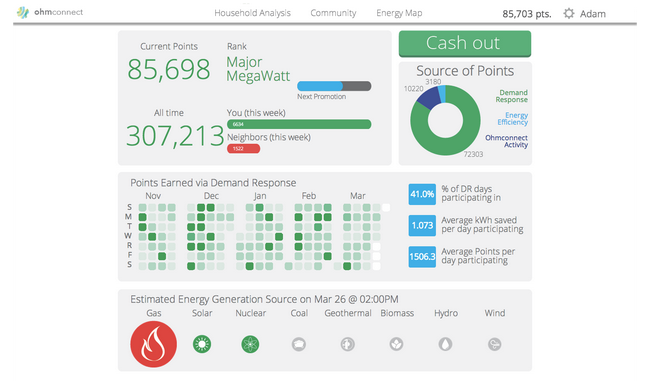 Tongue also tells me Ohmconnect has just rolled out integration with the Nest, Tesla, and Belkin APIs so users can set up automated reductions of these connected devices during peak periods, even if they aren't home or available to reduce it manually.

So far, Ohmconnect has only raised $100,000 in seed funding from Dave McClure's 500 Startups accelerator. Tongue says more cash is necessary to expand to other markets, though at this point that expansion is reliant on a few external factors. Right now its service is only available to customers with smart meters in states like California and Texas where federal and state initiatives have allowed everyday consumers to participate in energy markets and receive compensation for reductions. Tongue is confident however that Pennsylvania, New Jersey, and Maryland will follow suit later this year, followed by New York.

To be sure, Ohmconnect's growth may be limited by regional regulatory pressures and by what devices are located in its customers' homes. But by building a software platform that relies on existing hardware and infrastructure, Curtis and his team can avoid some of the huge expenses that plague other cleantech startups.

Everybody says software is eating the world. Maybe it can also save the planet.