Ted Rall joins Pando. This is going to be good.

As you might have noticed, Team Pando has been killing it over the past few weeks -- with Mark Ames' coverage of the Techtopus, David Sirota on General Catalyst and Charlie Baker, James Robinson on Indiegogo scampaigns, Carmel DeAmicis on Uber's background checks, Yasha Levine at the NRA convention, Michael Carney's phenomenal Bitcoin coverage and on and on. But what you already see on the site is just the very start.

Behind the scenes we've been plotting and planning the next phase of Pando: further expanding our reporting, curating more real world events, increasing member benefits and more. The next few months are going to be very, very exciting.

Ted will be focusing on the intersection of technology and (small "p") politics and how the two are basically indistinguishable at this point. His work will include columns, cartoons, comics journalism, essays... pretty much any format you can imagine, in fact.

For the 0.1% of readers who have never encountered Ted's work, here's all you need to know (via Wikipedia):

These are all reasons why any sensible person would be delighted to have Ted on board. But it's not often we're described as sensible people. The reasons we're delighted to welcome Ted have more to do with him sharing our ability to upset the kind of people who deserve to be made upset on a daily basis. Again, from Ted's Wikipedia page:

Rall is listed at #15 in Bernard Goldberg's book 100 People Who Are Screwing Up America described by the author as a "vicious, conspiracy-minded, hate-filled jerk". Rall perceived the listing as an honor, replying, "Not only am I grouped with many people whom I admire for their achievements and patriotism, I'm being demonized by McCarthyite thugs I despise."

Rall solicited funds from readers and left-wing bloggers while considering whether to sue Ann Coulter for libel and slander for her (later self-described as "joking") statement that, "Iran is soliciting cartoons on the Holocaust. So far, only Ted Rall, Garry Trudeau, and The New York Times have made submissions."

We could continue for thousands more words about Ted's mission and why he's a perfect fit for Pando, but instead we're going to let him speak for himself... 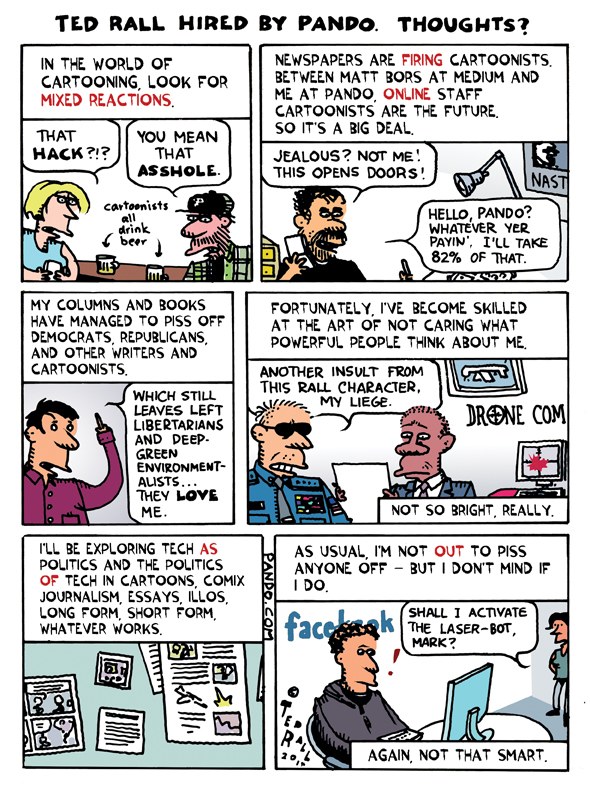